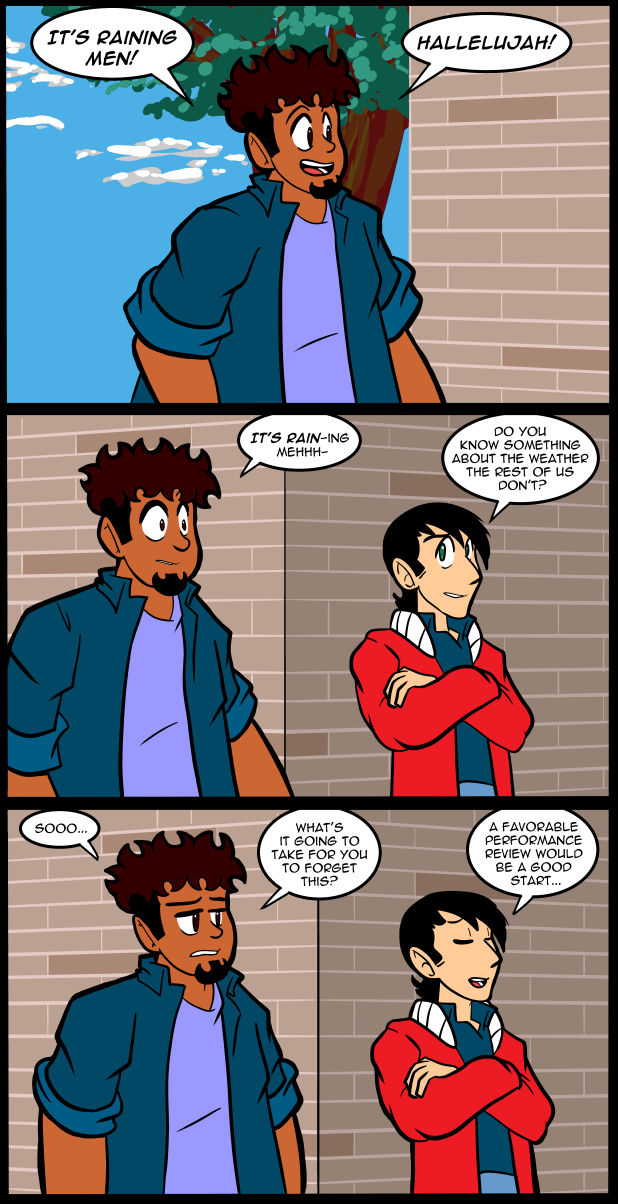 It took a while to decide on the perfect embarrassing song. I wanted something that will never stop being played, but also funny out of context. I thing It’s Raining Men is the perfect song for that, when the subject is a straight male. It’s also catchy and fun, so singing it when you aren’t being watched is enticing. It was probably on the radio and Mike just started singing along because he was already singing the other songs.

I asked the Patrons if I could share the special Nina drawing and, so far, they seem to want to keep it for themselves. It’s actually surprising to me because, as an artist, I’m culturally trained to dick myself over by giving my work away. Maybe I can talk them in to letting me show it off after some time has passed. XD

The last few days it’s been cold a couple of times at various points in the day. It seems to have put down some of the allergens that historically make it much harder for me to sleep. I’ve been able to sleep with the mask on, but sometimes I wake up shaking, like when I’ve had a really bad anxiety attack. I come to shivering, feeling scared, and cold. This morning it was really bad. Eventually it subsided, but it was very disruptive. I’ve been trying to build my strength back up, but I’m still having times where it’s knotted up so bad I can hardly function. Once I get over that I’m fine for a while. Of course feeling out of sorts makes it much easier to slip into irrational panic, which muddies up the “real” symptoms I have with the ones that come along with anxiety. I’ve had enough of a problem now that I’m genuinely considering trying medication, since I’m having a lot of trouble maintaining control.

My left side has always given me problems. That’s the arm that has weird pains. The knuckle pain I get is on that hand. I have had a weird mass of squishy flesh that started the very first time I ever had blood drawn on that elbow crease. The other arm, which has also been used to draw blood, is totally fine. My left hip is the bad one, the left foot is the one that has tried to get me killed twice. My left ear and jaw are the ones that always get infected, sore lymph nodes, or numbness from allergies. I always get spasms on my left side too. The only left part of my body that isn’t less good is my left eye. It’s slightly better than my right. Does anyone else feel like this, or is it just some weirdness unique to me?

When I woke up my hands were numb from laying on them, which makes me have weird dreams. I was having one about zombies who had trapped me and some werewolves in a store. It was very original Resident Evil. The game, not the movie. Anyway, like I said, I’m doing exercises to try and build my strength back up. I’m at that point where it seems to be making things worse before it gets better.

That song is amazing. Don’t let him bully you, Mike! You sing The Weathergirls and don’t let nobody tell you nothin!

Maybe Mike could scare Reggie away, by singing, “Chocolate Salty Balls”, at him. ;D

Or ‘Come Wayward Souls’. I’m sure Mike could pull it off no matter which range he sings.

I just saw a video of the song, “over the garden wall”, from the ‘Come Wayward Souls’ TV cartoon.
Yeah. That’s a spooky one! Heh, heh.

Awww, I was kinda hoping we were learning something new about Mike.

If it were actually raining men, I don’t think ANYONE would be reacting with a “hallelujah”, lesbian or otherwise. When you think about it, men raining down from the sky would be a horrific and gory disaster.

From the makers of “Sharknado”… it’s “MANSTORM”!

OMG now I think I want to see that…

I think I was assuming it would be more like Snowing men, with everyone in those flying squirrel suits.

They might make a mod for that in GTA. They have mods for pretty much everything else.

Thanks, that song will now be stuck in my head all day…

I lived that shit for a week while I did this week’s pages. Suffer with me. Let it be our bond!

Let it never be said you have not suffered for your art!

Though, Tom Brier does a hell of a job (once he gets the hang of the weird chords) improvising on it.

I’ve heard it so many times on the Simpsons, oddly…

Also, us normal viewers would be forever grateful if you did indeed post the Nina pic XD. Not like all of us can afford to donate when we’re living on Ramen noodles while going through college.

The exact same idea on my side.
I’m pretty sure that many of us would like to help you on Patreon but simply can’t.
We will do as soon as we get a job, but, in the mean time, we would be really pleased to be able to … you know …

I think it’s not a bad thing to keep some stuff for patron’s only as that will just be another reason to subscribe to you on there, willis, jeph and thus do the the same for their comics and such, if you keep giving everything away for free then people see no point in subscribing in the first place as they don’t have to

also putting up patron goals for increased number of comics each week is not bad idea also if you feel you can manage a extra day or so, you are free to set the goal as high as you like where you feel it justifies the extra work, just something i have seen some people have done and have worked for them….

Ps: am no patron myself(or of any others for that matter) so i don’t say this with a “i want more cause i support you on patron” kinda mindset be the way”

Well, sometimes people need something extra to be coxed to give something every month ya know, many have nothing against giving a small amount occaisionally but might not feel up to giving every month without something to sweeten the deal, just saying…..

I seem to recall a movie that uses this song in a fight scene…they even stopped to sing Happy Birthday after throwing each other into a restaurant before continuing the fight.

Smart negotiators always start with something they know they can’t get, so then they’ll be able to back down on their demands to get what they really want…

The French paratroopers have a phrase for that, to build their team spirit. It goes something like: “We go through the crap, together.”

Dang. that was supposed to go on Jackie’s “Suffer with me” comment.

Let him have his song. Everyone has a song they don’t want others to hear them sing

Well, at least I don’t have “Little Old Lady from Pasadena” stuck in my head anymore.

Also, I hope your left side starts working properly. Either way, you’ll be all right eventually.

I’ve got a question for the Patreons.
When you become a Patreon, do you get access to previous rewards ?

Yes, but not officially until you’ve made one successful pledge. I’ve been known to bend the rules if people are cool.

What is a “successful” pledge?

On patreon you aren’t charged until the first of the following month, so the pledge doesn’t complete until that time when the account is charged. And sometimes the pledge doesn’t go through, for whatever reason and is, therefore, unsuccessful.

Thanks for the answer.
I’ll then be able to see previous drawings when I get a job \o/

I find this amusing because I’ve found myself singing along to this song on more than one occasion. It’s really catchy.