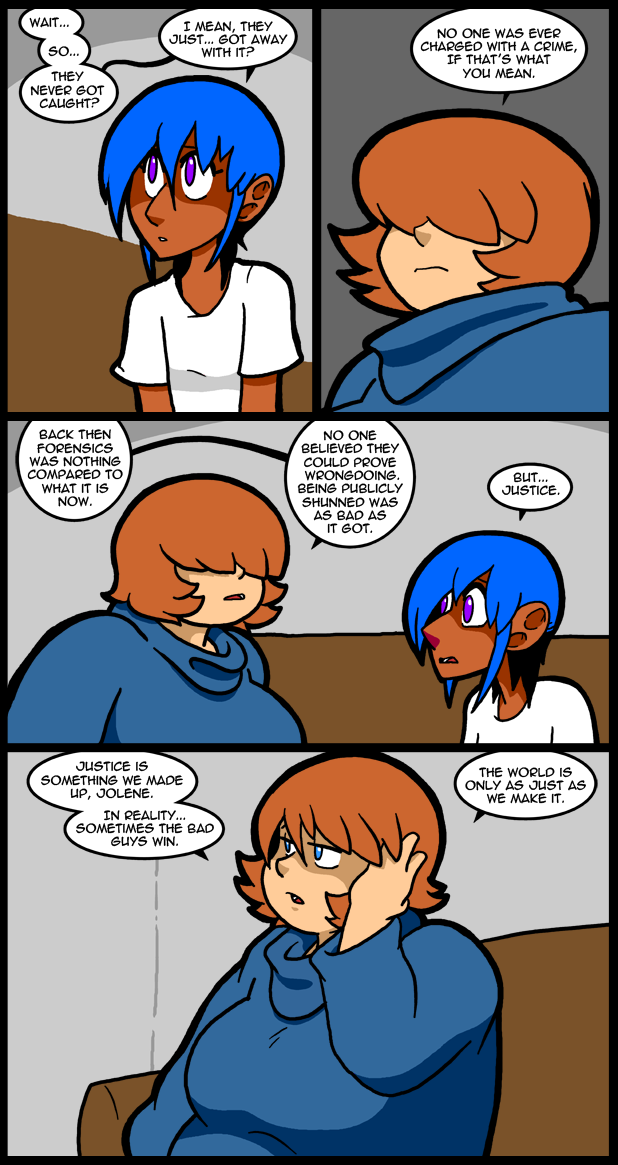 I got the Teen Tomodachi Life for her birthday because she seemed to like the demo. She has been making the miis sing insane songs to me because it cracks me up. It’s nearly made me laugh enough to want to play the “game” myself.

I’ve decided, since the Muffintop anthology has been out for quite some time, and has likely sold as many as it was going to sell anyway, to release my few pages as a color bonus for Patreon backers. Once I actually color the pages anyway. They were an idea for a little interaction between Carol and Thomas that I could have used for the comic at any time, but I needed something for the anthology, so I just made a short version of it. It’s just a cute little interaction between them focusing primarily on Carol’s curves. I thought coloring it might make a nice bonus.

As a platinum Nintendo club member I got a code for the unrestricted Smash brothers 3DS demo on Saturday maybe? Whatever day it was it was crazy. I didn’t really think about it and announced that I’d gotten the code on social media and suddenly I had a lot of new friends who really wanted that code. I didn’t realize they actually gave me 4 so I could share 3 with friends and family, so I was surprised. Anyway I certainly wasn’t going to give them to people who followed me just to get the damn things. I went down my list of people who always help me and marked them off until I had no codes left. In situations like this I prefer to give back to people who help me directly. Anyway, long story short, the game is great and I look forward to the full release. The Villager is totally awesome and makes me happy as a big fan of Animal Crossing. Mega Man is fun to play. I can see him becoming a regular for me. Mario, Pikachu, and Link all maintain their places in my lineup. Basically Link is the best, Mario is okay, and Pikachu is a cheap spamming bitch. XD

I’m feeling a little ill so I’m not going to try and draw this out any farther. I hope you enjoy your continuing speculation about this little tale of woe.

Prediction: They track down the original family and their names, get some proper tombstones, and hold a long-overdue funeral.

Also, once Smash comes out for us non-platinum “Normies” I’d love the chance to unleash Ness on you. I am the god of floaty PK Thunder-death! Mwahaha!

I think you’ll find that I hold that title…

I need a better router before I can hope to sustain any kind of online play. Crave has already fallen victim to my intermittent connection already.

But will the family whose name was anglicized, have a decendant we know?

Likely.
This happened five generations ago (unless she dropped some greats from great great grandpa Wurfel). Enough time for a family to move away and come back again.
Of course it could be one of the characters with a currently unknown surname (like Dawn and her family).
Unless it is a setup for another character that will appear soon.

OK, now I have to look it up…
It is great great grandpa here: http://betweenfailures.com/comics1/1212-bibliophile

I registered a ton of nintendo swag to get a platinum membership and came up 30 points short. You know how much that sucks.

I hit platinum but never got any codes…so…yeah…

Alex is like the modern version of those old movies where when the character is having a dramatic moment this rectangle of light was suddenly beamed at their eyes for emphasis. Except unlike some of those she doesn’t seem to be over doing it. Yet.

Alex is like a breakout character. I want her to hangout with the rest of the cast, but she has screw you money so it’s very unlikely that she’ll work retail……but a man can dream.

“The world is only as just as we make it.”

And that’s how The Batman was born.

Or a Sundance breakout docu-drama mega-hit, written and directed by Jolene Brooks.

Ever dance with the devil in the pale moonlight?

Holy crap she has eyes!

She’s going to shatter Jo’s view of the world at this rate.

Yes, Virginia, there really is a slender man…….

Ooh i got the unlimited demo as well and will keep it in my 3ds forever. Gotta say that villagers tree attacks are awesome. I love megaman.exe as well.

Did somebody say movie heroine opposite John?

On Justice:
There was a debate like that in a Sherlock Holmes story: [paraphrase]:
Holmes: Why are you arresting that couple? He tried to kill them, and they fought back. He died in the fight. They didn’t murder their attacker!

Policeman: You + I saw it, but “not guilty of murder” is not for the two of us to decide! That is for the courts. That’s the law. That’s justice.

Holmes: Balderdash! [Justice] is one thing! [ The law]…is what we settle for!

I get the feeling that we are headed for Thomas to be related to the bad guys.

“The United States is a nation of laws: badly written and randomly enforced.”
–Frank Zappa

Alex is wrong. It really should be:

No visible or obvious consequences not always the same as winning. If they can sleep soundly at night it’s gotta suck somewhat just to be that sort of person. If you can’t feel guilt can you really feel joy or appreciate other’s accomplishments?

Don’t diss the mouse, I’ve played as him since the N64.

On that note, might we be able to share friend codes? I wanna see if I could battle you with the demo.

(but, to be completely honest, I mostly want to see what kind of Pokemon you have in your Friend Safari)

Or, since I found out that I can’t play the demo online, I think my question might be moot.

You can find my friend code on the twitter feed. Leave yours and I’ll add it when I have my ds handy.

On another note, are you ever going to try to make some Miis for your characters?

Did Jo just get a slight nosebleed in panel 3?