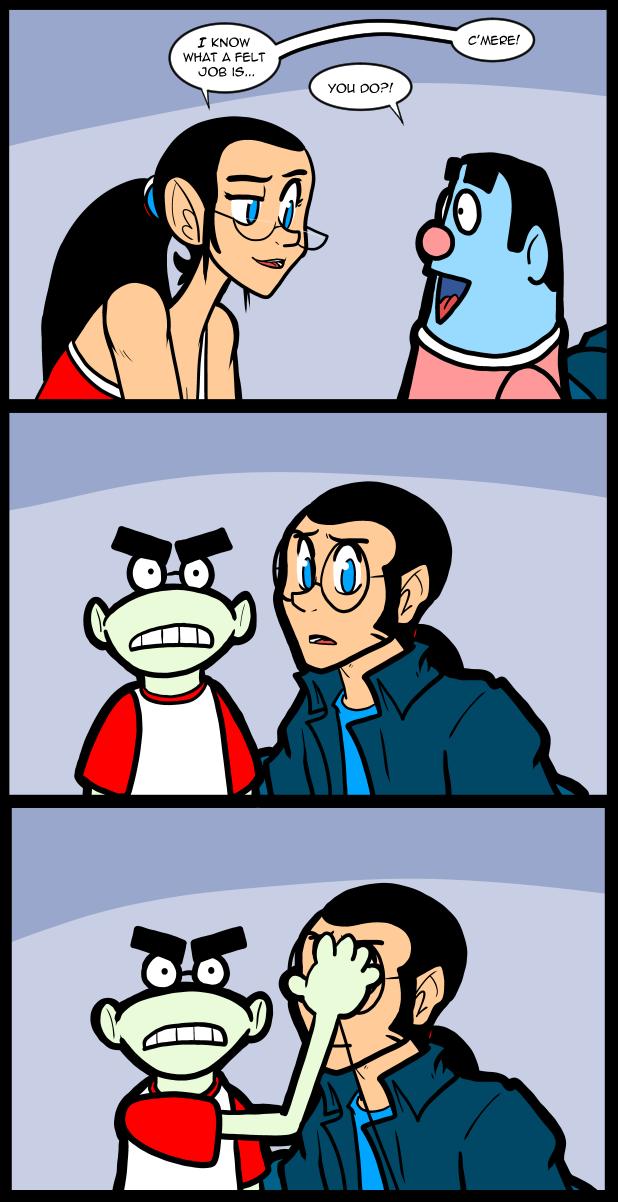 In order to make this work in my standard format I had to change things from my original vision. If I was presenting this all at once It would have been the first panel, then one of Jessica performing the “felt job” then Ed reacting. This still works because you will fill in the blank until I actually show it. Or I could just never show what I decided it was, which might also be funny. In any case, if this was animated, the puppet hand would slowly rise until it was covering Ed’s eyes, rather than a fast move.

Part of what makes puppet comedy work is how much the people involved are willing to play along with the bit. It also works if some of the people don’t buy in at all. The performer has to be able to improv fairly well. Ed & Mike are both creative, play tabletop games, and other things that are basically performing arts on some level. At its core puppetry isn’t all that different from putting on a mask and pretending to be someone else, which is something all humans at one time or another.

After many years of resisting I’m probably going to ad a bunch of tiers to the Patreon, because most people miss the part where you can customize your pledge. I’m not offering more stuff, but if you’re doing exceptionally well in these tough economic times you can pledge more based on how much you’d like me to keep telling my ridiculous story. I already did it for Subscribestar since almost no one uses it. At some point I might consider adding more value to higher pledges, but I always kept it basic because I’m barely keeping things going as it is. I’d like to believe that things will turn around and I’ll be able to produce more stuff faster, but life keeps kicking me in the dick every time I dare to be hopeful. So I’m managing expectation. Anyway, after that amazing pitch, please consider supporting my work via the links above if you value it. I would appreciate it.

This is so funny and well executed; Ed’s reaction sells it better than anything I can imagine could.

Oh totally. I’m in the jump cut away and never show it side.

Or keep it for a Horrific ( or not) Flashback later on in some plot, or…..
Soooo many possibilities… 3:)

True. Imagination is very powerful. Keep the “felt job” totally there in our imaginations, it will be more lewd than anything anyone can draw.

Until proven otherwise, I will consider a felt job to be lewd. Comedic, but lewd.

Gotta love how unabashedly forward Jess can be .

….Well, aside from Ed

I love how even in the first few strips you were already referencing the muppets.
Now Ed really is waggling his arms muppet style, just in a different sense of the word

Ed’s puppet may be a snarky, surly son of a bitch, but man, he’s always right there and ready to take one for the team. Give the puppet his ups.

This is starting to go the route of the Happytime Murders, lol.

Just hope it isn’t like a “pen job” from “Cool World”.