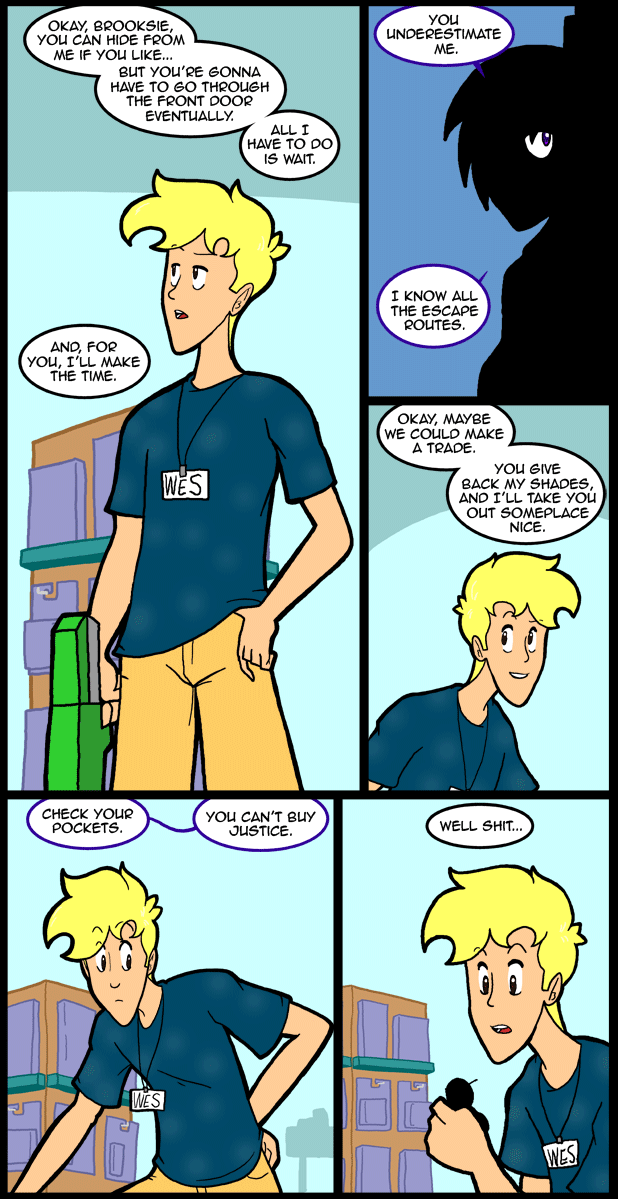 I’ve had a few really odd dreams lately, but I haven’t been able to sit down and write them out, so most of them are lost except for the high points. Last night I had another odd one, but I did have time to make not of what happened. It was me and another guy. I don’t know who it was supposed to be, or if he was someone I’ve seen on TV or something, but in the dream world we had been friends for a long time. The dream world opperated by RPG logic, so as long a you declared yourself to be on a quest you could go into any structure and take anything that wasn’t locked up. So he and I were Just spending an afternoon looting people’s homes. Anyway, we came upon this really nice two story kind of log house and decided to see if there was anything we could use inside. The door was open, so se went inside and set about rifling through all the drawers and what have you. Eventually we got done looking around the regular floors, having found nothing useful (don’t you hate places like that in RPGS?) and decided to see if there was a basement. It took a while to find the door because it was made to be hard to find, but it led down a very long staircase to a fully furnished basement. Above the door to the main chamber of the basement was a sign that read Transgeneration 1. On the left there was an Autobot symbol and on the other was the Decepticon one. I think it’s the most clever thing I’ve ever seen.
I was like “Whoever lives here is our next team member!”
My friend was like “What makes you think that?”
“Transgeneration 1? Duh, whoever they are they must be transgender. That’s a total RPG trope.”
“Do you even know what Transgender is?”
“Not exactly, no. I know what it is based on years of playing RPGS.”
“and?”
“It’s a hot girl pretending to be a guy and one of us gets with them midway through the game and then they start dressing super hot!”
He waits for a beat.
“Your logic is sound…”
So he goes in to talk to this person but as he opens the door a huge bearded dude comes out, clearly dressed to go to work. He looks really annoyed, but he’s kind of graceful in the way he moves around us. “Don’t mess with my game stuff. I have to go to work.” He’s wearing a Hastings apron (which is chain in the Midwest) so we know where to find him later. He just leaves us to do what ever we want. doesn’t lock the door behind him or anything. We go through the whole basement and can’t find anything to figure out if he’s really transgender or not. (Honestly, I don’t think my brain has any idea what a real transgender person would have in their house that would be a tip off.) I’m still convinced he is and that he’s our new team member. We set off to collect him from his work place because we have to have at least 4 team members, if not more, for this to be a good RPG. I wake up as we’re driving.
I really wonder where that one was going. XD

i may hate Wes, but goddamn you gotta admit he triesXD

He might try, but he lacks the skills needed for success. Whats he going to do, take her out to a dinner and a movie? The dinner he probably doesnt have money for being a new hire, and the movie? Please, she’s either already seen it, seen the original, or will criticize the movie and his taste in them. It would take him all night to realize she pwned him before he even asked her out.

Truly, she is one with the shadow.

In regards to the term transgeneration 1, I think that would more refer to Transformers: Generation 1… meaning the 80’s cartoons.

Yeah, he’ll take her somewhere nice… and try to have his way with her.

And she’ll end up feeding him his gonads.

And judging by this comic, he wouldn’t noticed until he’s swallowed them.

I had a weird dream a week ago – was driving along in a brand-new Ford GT, then I stopped the car, opened the door and flew off in a semi-foetal position as if it were the most natural thing in the world.

Work that one out.

Annnd she’s likely behind that case in panel 1, not there now of course, just there long enough so he can hear her.

I need to marry brooksie. She is so amazing.

Sorry dude. She’s taken. “Brook” & “Brooksie” Yah, we’re just as cute as that sounds. With Brooksie how can I miss?

I read this somewhere but didn’t see the comic… :/ I have backwarded myself. Did you post this on tumblr earlier today?

At the same time I posted it.

The funny part here is the possibility Jo copped a feel while returning the shades.