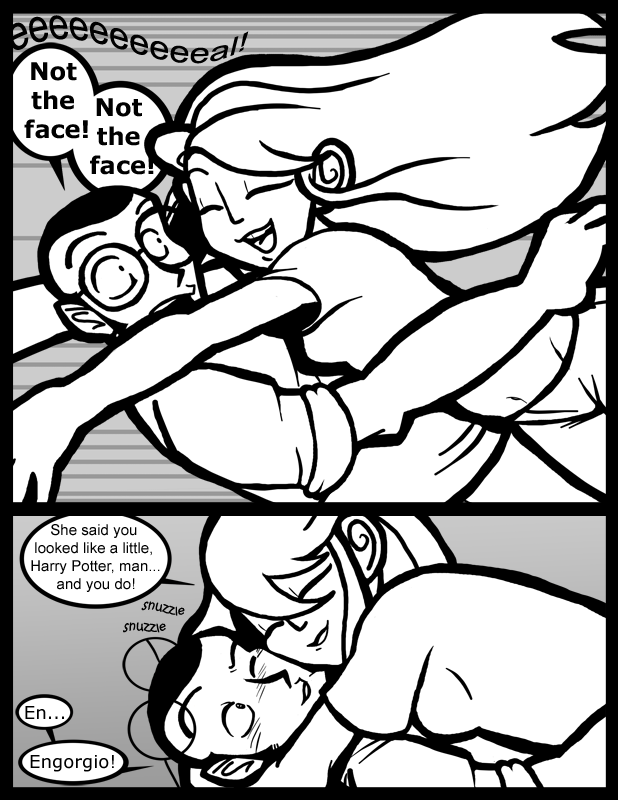 Really? Really? No comments on this page? Well okay then.
Ed’s a lucky bastard

What if Ed’s gay?

Hahaha. Wow. Even ed gets lovin. I feel even worse for John now…

“Engorgio?” Edward really needs to leave the innuendo to the professionals.

How the HELL did I see “Not the face” (x2) coming XD Seriously, I’ma FREAKIN psychic!!!

P.S.S. Is he trying something with speaking that enlargement spell? Hmmm…

I suppose I can stop waxing pedantic over grammar terms, but why would I want to?

So that’s what P.S. means! I always wondered, but never cared, what the initialism stood for.

NOT the face XD

I think she likes him.

And this might just be my dirty mind, but the second panel makes me think she’s dry humping him.

I really want to make a lame Pokemon joke here.

I suspect that him saying Engorgio is a reference to a ‘certain part’ of his ‘anatomy’ that is growing at that very moment…if you catch my drift.

Aand I stand corrected on that embarrassment prevention point.

Pff. Forgot about this. Legit got a chuckle and smile. <3