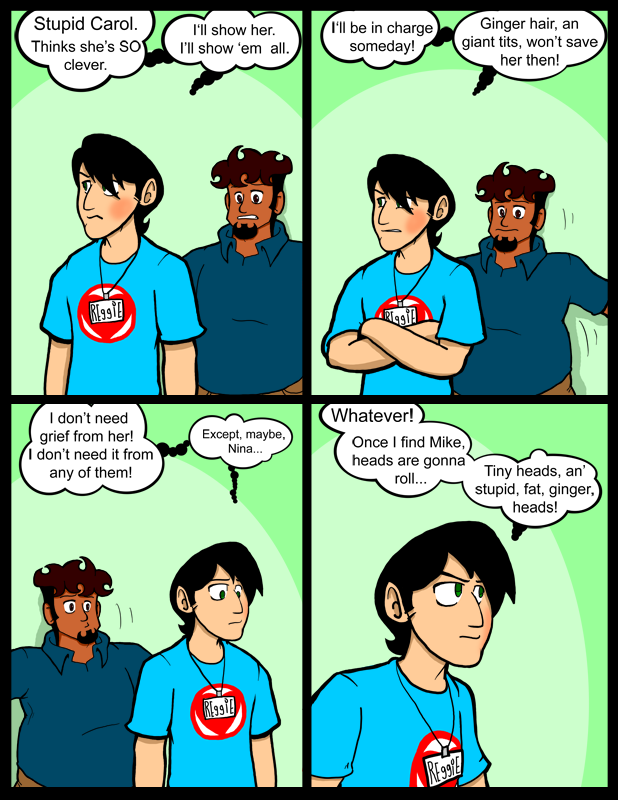 This page was way more complex in my mind, like, three or four pages complex.  However, I felt no one would tolerate that much of Mike’s comic sneaking, and also much of my idea was far too difficult for me to draw.  So I ended up with Mike scooching across the wall behind Reggie.  Feel free to imagine a much more complicated series of events.  When the animated version comes out you can look back and see how close our visions were.  Won’t that be fun?

You know, Mike is really loosely based, in part, on a real guy I worked with many years ago.  The story is long, and I don’t necessarily want to tell it here, but memories of him stuck with me long enough to congeal into what Mike is now.  I mention this because I found out that the guy has The Cancer.  It’s just an odd coincidence, and I’m not sure how I feel about knowing it.  The fact that I ran into him again was strange enough.

He be dissin my girl Carol! BURN HIM!

he thinks way to much

Sorry to hear that.

I actually find Mike’s attempts to be stealthy are quite humorous. Even more so cause Reggie is just so damn CLUELESS XD.

“Hi, I’m an assassin! Wait a minute, I’m not supposed to say that…”

GOOD LORD USE THE BOX MIKE!

In my book, at least. XD

I love that Mike is sneakily trying to stay behind him unseen and that, even though Nina has bitch-slapped him into submission, he’s still pining after her. Odd-ball. ^^

I disagree… ginger hair and giant tits will win the day every time.

And Reggie should be careful what he wishes for. If he was in charge, odds are he’d actually hate it.

Colonel, how can I get past this gigantic douche?

Mike, use the shoulder buttons to sneak along the walls!

Can I imagine he used a box at some point?
;)

Ginger hair and giant tits…….I have to go do something in private now.

If I may add… Carol’s ginger hair and giant tits are awesome, now if you’ll excuse me, I have to go use my imagination to picture her as Thomas enjoyed her, au naturale…

Reggie’s gonna go ballistix when he finds out Nina has a thing for Ed :) I wonder if he’ll have some Kuno-esque plan in the works after that :P

Mike is doing what’s called the “office limbo dance” – how flat can one go against a wall to sneak past?