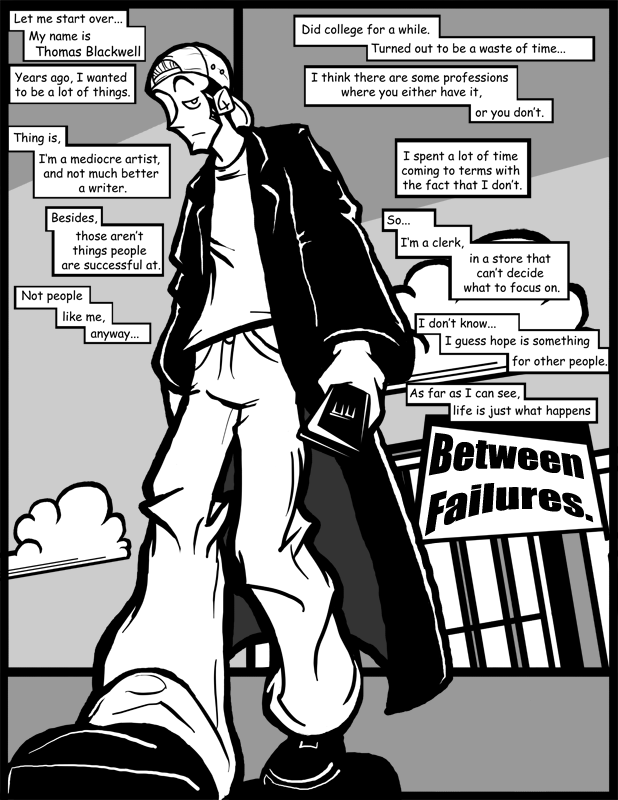 he looks like if Randal, Dante, Jay, and Silent Bob (all from Clerks) all smashed into one

This strip was probably the one that caught my attention at first. It promised a character with some depth to him. I also digged the title drop.

the painful depth of a person with nothing better to do than sit around thinking about everything that has went awry with his whole life.

Makes for a cracking good read though. :]

And draws the readers sympathies to give them an emotional stake in the story.

I feel you, bro. College was just a way to keep the freaks (Teachers) of the streets.

I’d forgotten how small the navigation links were… or maybe they weren’t always that small… dunno. I seem to frequently have trouble navigating certain sites at work because the browser is always so horrendously out of date.

Ah. Got it now. I read the speech bubbles in the right order on the third try.

“There are no secrets to success. It is the result of preparation, hard work and learning from failure.”
– Colin Powell

This web comic hit me right in the feels more than most web comics. The reason is that I’ve seen several of my friends give up on potential art careers because they didn’t put in the time and effort to master their arts. As Seth Godin wrote, “The only thing worse than starting something and failing… is not starting something.”

“Winners never quit and quitters never win.”
– Vince Lombardi was the head coach and general manager of the Green Bay Packers. Vince Lombardi led the team to three NFL championships and to victories in Super Bowls I and II (1967 and 1968). Because of his success, he became a national symbol of single-minded determination to win.

This story of Thomas Blackwell reminds me of the joke about a man who asked a passerby “How do you get to Carnegie Hall?” whose punch line is “Practice, practice, practice”. I hope Thomas someday realizes that he needs to put in the effort to improve his artist skills while realizing that you truly never fail until you stop trying to reach your goals. An artistic skill is not something you are born with. An artistic skill needs to build up within you by putting in the time and effort to master.

As Isaac Asimov wrote in his book, “Would you believe”?