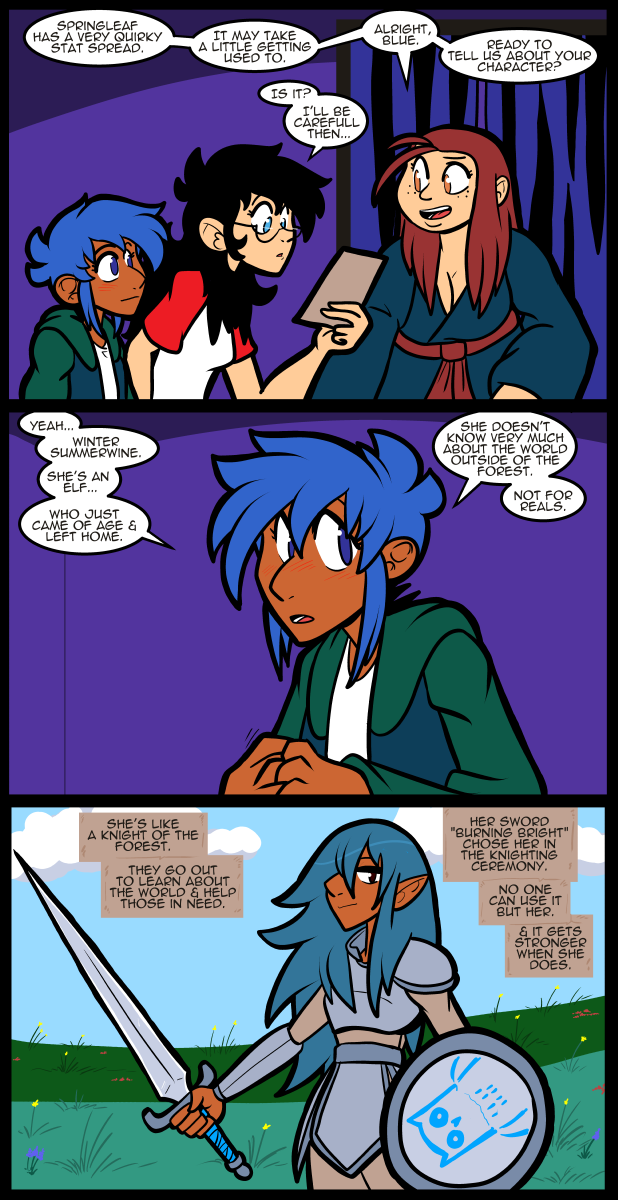 I struggled with this a little because I wanted to make the characters look not like their counterparts, but it got more similar the less familiar with the game they were. Mike is truly embracing things, Ed sort of is, Jess doesn’t fully grasp what she’s doing, & Jo is going by things she’s seen which aren’t great examples of roleplaying per se. I also wasn’t sure about skin color carrying over, but wanted a visual cue so people wouldn’t have to guess as much. I also only wanted them to look lever 3 or 4 epic rather than the high level media wants to default to. Over time they will look more and more capable.

I slept so poorly today that I was glad I finished the entire page early. I slept for 4 hours then couldn’t get back to sleep even though I knew I hadn’t slept enough. So when I finally drifted off I had to get up right away and felt dizzy, which is what happens when I get pulled out of deep sleep before I’m done. My body is trying to return to a nightsleep pattern because it’s been snowing so it can’t tell when exactly the sun is out, so it tries to shift itself back to that. my allergies are so bad at the moment it makes sleeping very difficult already, so the addition of a shift change has screwed up my production times terribly.

I thought these were characters made by Roulette. Wouldn’t they just get different characters later, when they make their own anyways?

The art on the sheets are vague so you can personalize them. They’re just a framework to build on quickly, which is why she told Mike he could change his. Also, if they like them they don’t have to abandon them. They could just keep playing the started game till it ends if they like it.

I think Rulette knows about the characters but she has them present themselves to the rest of the group, for introductions’ sake

Team building. In game yesterday u have to know your companions’ strengths and liabilities. No sense taking the chaotic neutral drarf in to see the King. Just will not go well. (At least in my experience, no one died by the knig’s two guards.)

She’s the only one who can use that sword, + when she does use it, it gets more powerful.
That sound like a Thor’s Hammer kind of a weapon. *shrugs*

It’s just a basic weapon that scales to the level of the user. It gives someone a magic sword that never breaks the game.

Unless you roll a triple 1

Um…only one “r” is needed, in that woodsy thing.
That’s a thing I misspell a lot, myself. [You would think they’d make, “misspell” much easier to spell.] :)

I always want to put two in…

I swear to god, don’t start proofreading my fucking blog. I’m already on my last nerve.

“Life is like a box of swords at a knighting ceremony. You never know which one’s going to choose you. And that’s all I have to say about that.”

I spotted that, was wondering if it was deliberate.

Should forrest be forest?

one of those special lighting setups they make for people with seasonal affective disorder might help with that sleep timing issue.
another thing that might is making sure all your devices have a soft light mode setting for when it’s getting near bedtime (not sure what it’s called, the one that reduces the blue tint)

Hey Jackie, what made you choose to use the Player’s ear numbers for some of the PCs, but not others? Also, I still haven’t figured out what the numbers mean, did you ever explain that and I just missed it?

Thanks, feel better, and keep up the great work!

There’s so many that I can’t remember them all without looking them up every time so I just do whatever now.

This arc is a-bringing back so many fond memories. Thanks for the trip down memory lane!

I am loving the interplay here… Winter & summer in the Elvish name, Brooksie blushing as she’s describing her in-game character who’s projecting all the confidence that Brooksie just isn’t right now. Also, if her shield doesn’t have a name yet, I so want to call it YOLO, because my mind is going to “You Obviously Like Owls.”

XD Shields don’t usually get names, but i’ll keep it in mind.

There is an Irish hero of legend, named Cúchulainn, aka “Cuchulain”.
Sometimes, in English he’s called, Cuhullin. He’s a warrior-type hero, sort of in King Arthur’s times.

I think he had a metal shield, named, “Ocean”. It was called “Ocean”, because it made a big sound when you hit it.
You can read about Cúchulainn, in the novel:
Red Branch by Morgan Llywelyn. I enjoyed this book.

actually, i thought the Owl was a sort of hidden Dr.Whoo reference

Level-adjusted weapons are the best, since you don’t have to keep swapping out gear. Although if she’s an elf with a bonded sword, why not go the whole hog and give her a moonblade? :P

Kelley and Sam took a walk and came upon a forest.

Kelley said, “Ya means ‘de guy from Star Trek? Where?”

Sam said, “I hope I ain’t gotta explain the joke to the readers.”