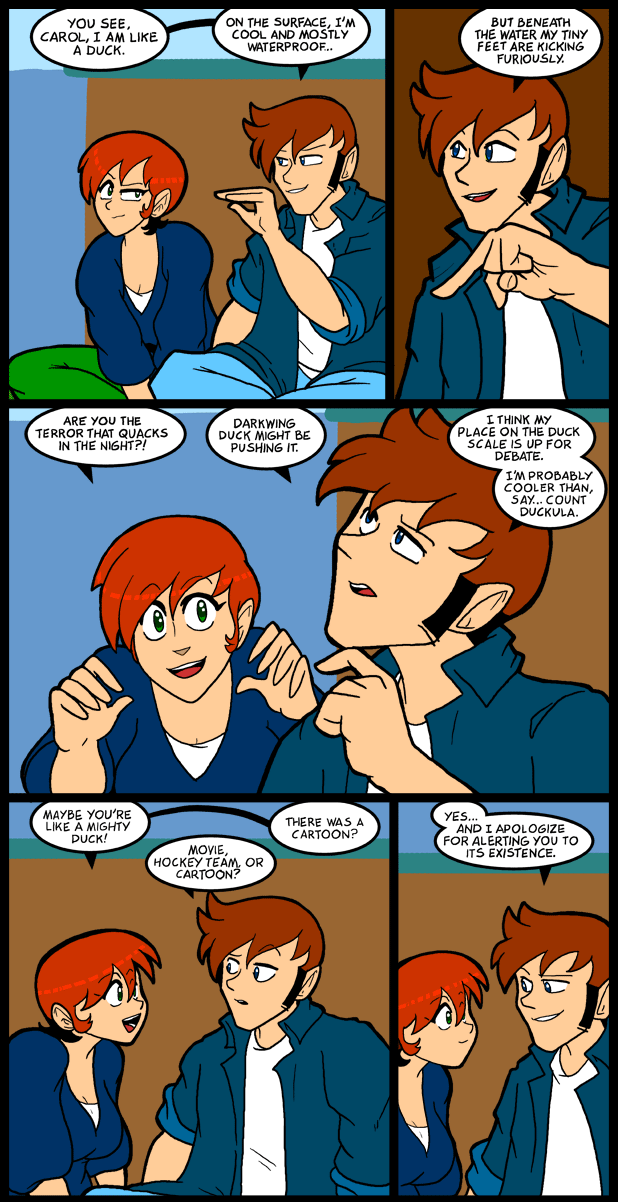 This is one of those pages where I swear one of the characters have already said this dialog, because I’ve said it so often in my real life. Someone else may have said it too, this is kind of a theme, so it would make sense. Thomas may even have said these exact words to Carol before, but I felt like even if he had the point would bear repeating. Also people do tend to repeat themselves. I know I tell the same 6 or 7 stories every time I meet new people, so the ones who already know me are like “It was only 4 trolls whe he told that one to me…” Anyway, in either case she leads him off on a different tangent, which is what would really happen anyway. I also liked the idea of him making goof hand gestures at her as he made the analogy.

that cartoon was so deliciously horrible, I remember watching it as a kid and laughing at how ridiculous it was

…does he realize the Mighty Ducks are technically no longer a hockey team? I mean, Anaheim still has a team, but they’re just the Ducks now.

Also, never apologize for telling people about that show. That show (as remembered through the haze of years) was awesome.

I actually didn’t know that a team by that name had ever existed outside of fiction until you said that.

Yeah, they’ve been a team since around the time the first movie came out. Disney actually owned them. Then someone else bought them a few years back and changed the name from “Mighty Ducks of Anaheim” to “Anaheim Ducks.”

God, I remember that show. That theme song would stick in my head for days. But now I just remember “Here come the mighty Ducks” and “Time for a quack attack!”

I thought that Darkwing Duck was the terror that flaps in the night. I don’t remember him ever saing quak.

Disney should bring Darkwing Duck back.

Didja know they made a DWD comic? It was actually pretty good.

I’ll check it out. Thanks.

I recall him saying it once, but it was a dark and mysteriously uttered “….Quack.” I have to go and re-watch that now.He was awesome. I think Launchpad was my favorite in both Ducktales and Darkwing he was just too cute.

There was a cartoon? I must now find it.

Ooh, yeah. That show was the shit. I remember the theme and all the characters. Good and bad.

I had forgotten about that cartoon show. One of only two sport team or professional player related cartoon show that I can remember. The other if you are wondering lasted all of one season “ProStars”. God what rubbish I remember watching in early 90′s.

You sir, are getting even better at drawing facial expressions. I love every single one of Carol’s expressions in this page, keep up the amazing work!

Mmm… sorry, anything to do with the Mighty Ducks — or Darkwing Duck, for that matter — occurred after I stopped watching Saturday morning cartoons. I grew up with Hanna-Barbera’s Yogi Bear and Huckleberry Hound (funny — a lot of Yuppies have no clue who the blue dog is) and DePatie-Freleng’s Here Comes the Grump: http://www.youtube.com/watch?v=R2isiVBnpwE.

As time progressed, I came to despise the lame cr@p coming out of Hanna-Barbera. I don’t understand the continuing fascination with Scooby Doo (it sucked in the ’70s and it still does — they only ever had one story) yet I’ll still stop channel surfing to watch Warner Brothers or Rocky & Bullwinkle reruns. And yes — the complete run of Crusader Rabbit awaits in my living room…

I still enjoy Scooby Doo as ‘light entertainment’ to watch on occasion. For the most part I do prefer stuff that is heavier though. Oh, and they have changed the story some, mostly to add in some back story, with Mystery Inc.

Somewhere I have a copy of Fractured Fairy Tales.

That being said, remember Super Chicken? After all, you knew the job was dangerous when you took it, Fred.

Blow my mind, why don’t you? I was thinking about including a comment regarding Super Chicken and Fred as I wrote the comment above, but I was distracted by something at work. Uncanny…


And stop calling me Fred. My name’s Adolf

i’ve never used a duck scale but i’ve definitely compared myself with a duck in that manner many many times!

The cartoon was one of my favorites. I still have my Wildwing action figure.

Looking back, yes, it wasn’t Shakespeare. But it still beats the pants off of most of the crap that kids are subjected to today. Who thought that “Problem Solverz” thing was a good idea? It literally looks like an acid trip with all of those glaring neon colors, and that’s just the tip of the iceberg.

I don’t know why but Thomas’ face looks a bit off in the first panel… couldn’t tell you for the life of me why, though. He looks more… asian than usual?

Maybe I’m just having an off day…

Anyway, I remember a bit of the Might Ducks cartoon, and I couldn’t help but feel that the people making it were trying for turtles and failing a bit…

Which, in turns, makes me want to watch the old TMNT toons and Samurai Pizza Cats. Whelp, so much for any productivity today!

Am I the only one who noticed Thomas is technically flipping everyone off in panel 2? (Ok, I know he’s doing the “duck-kicking” gesture, but I notice weird things…)

That’s why they call it “the bird”.

Ummmm…… Know what else ducks do beneath the surface of the water? Rape each other. Like, a lot. Enough so that the females have evolved new genitalia to stop the rape and the males evolve to keep raping them. It’s kinda like a gross sexual arms race.

ROFL! This is the kind of conversation I only have with friends of similar geek/nerd cred. I really appreciate such people. The other people I hang out with make jokes about the different calibers of machine guns and obscure weaponry I’ve never heard of. Needless to say, I don’t get the jokes.

I love Carol’s expression in the last two panels. She looks so happy and eager.

I especially like Carol’s expression in the last panel, she looks so cute there.

Curse you you magnificent bastard!

Curse you, you magnificent bastard!

Darkwing and Count Duckula were some of my favorite cartoons as a kid and a teen, respectively. I never was much of a Danger Mouse fan, but Duckula just kind of struck a chord with me.

As long as he’s better than Howard the Duck.