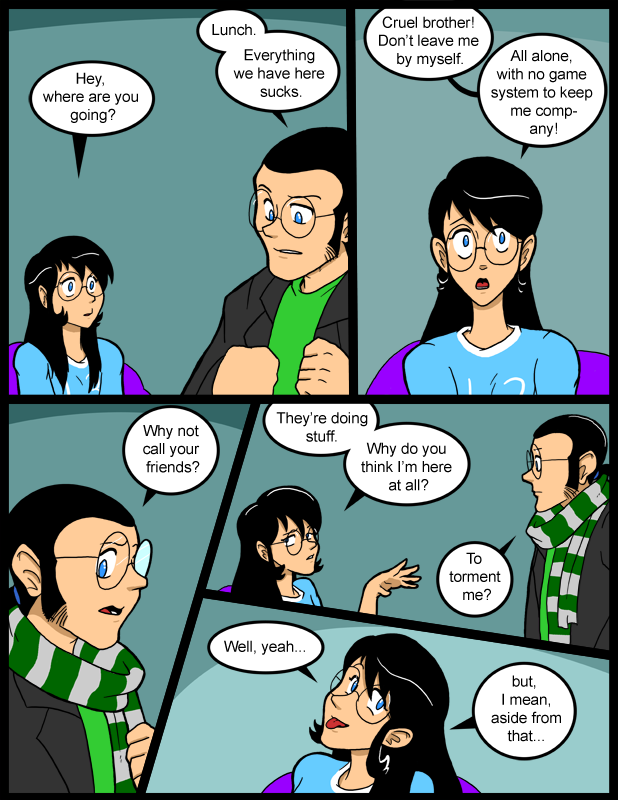 I’ve had a couple of dreams lately, and I remembered them at the time, but they were scary so I made an effort to forget them. Which is fine on an emotional level, but it does delete content for potential posts later. I was going to talk about an article I read but now I can’t find it.

I’m still playing Dragon Quest 9, and I still haven’t come near any other being that had tag mode on. I think Nintendo should have considered the size of America relative to the size of Japan and made some kind of provision for those of us trapped in the wastelands.

I watched the final Urusei Yatsura movie the other night. It was the highest quality animation since the second one. The story was also good and felt like it wasn’t just fanfiction. It had a typical non-ending though. Nothing resolves, but there were a few good moments where the cast expressed their feelings for one another. I don’t know if that’s really where all media concluded for the series, but if it was I think it was a satisfactory close. As satisfactory as you get with Rumiko Takahashi it seems.

I’ve heard Maison Ikkoku described as “The one Rumiko Takahashi series with a real ending,” though I can’t vouch for that fact myself. Maybe try giving that a look.

I should. Not sure if any of the books are still readily available though.

I can vouch for Maison Ikkoku and it was quite available the last I checked, since VIZ made a second edition out of it. This for the manga I mean. Never touched the anime version.

Then again, I think VIZ is the worst that ever happened to Takahashi’s works….

I’ll vouch for that.

Maison Ikkoku had a spectacular ending.

Panel 2, is Jess wearing earrings or is that just some of the shine from her hair?

I love her tongue in the last panel.
So gosh darn cute.

Her whole expression i mean. Not _just_ the tongue.

in the name. torment. geez, what are you, blind?

Yeah, it’s the number of the beast so where’s the rock and Satan references?

Is it just me, or does Ed gain about twenty pounds when he puts the coat and scarf on? I swear he could pull a small bazooka out of there and it wouldn’t shock me in the least.

Also, after some… what, six? Seven? Meh, I lost track. After several years in NYC, I almost never ran across anyone playing the same game I was, unless I didn’t have my system with me, in which case there was a nice Pokemon trade, some decent FFTA fighting, or whatever else going on. I list those two because I played them the most, and can also still locate the cartridges. What Nintendo REALLY needs to do is attach pager devices to the cartriges so you can call a number and locate them by the beeping noise…

There’s a lot more coat than there is Ed. X]

Maybe Nintendo should just start tagging customers in the wild so they can be easily tracked online.

OK, If she says “brother” one more time!

Yes, I know that it helps to maintain the fact that they are siblings – but by this point in the exchange you could reduce the need for the “brother” “sister” talk by just giving her a bit more clothing and slightly more stock postures. They are starting to sound a might bit formal, what with the titles and proper familiar syntax.

However, this penchant for titles was set way back in the early parts of day 1 at work so, this could be the way they talk to each other, however stilted.

Hummm… Still do not know about the tongue – when you stick it out do you bend it down? Looks odd to me.

Really do like the work-to-date – took two days to get through it but the narrative holds up well. Very good pacing too – just about the time one starts to wonder about the others the scene shifts.

Their speech patter is actually based on a weird thing my family does. I thought that was how everyone talked to family members when I was little.

I bend my tongue down over my bottom lip when I stick it out, but it’s not very long because it’s attatched to the bottom of my jaw funny.

Thanks for reading, glad you enjoyed yourself.

Too bad they’re not Japanese…. That’s how family’s address each other over there….

(( Onii-chan = Brother, Onee-chan=sister, though with how Ed addresses her, it would be Nee-san, for a younger tone of “Sister”.))

Also, the mom and dad would really call each other “Mother” and “Father”. Those silly Japs! ^_^

It seems that way sometimes. X3

Oh, for pete’s sake, girl. He’s going to LUNCH. If you don’t want to be alone, put some clothes on and go with him!
(Can you tell I’ve been a father for longer than the age of these characters?)

On a less silly note, I clicked over here from a banner ad, and read through the archives this past week. Really enjoyed the humor and the story so far.

Negotiations have to happen before she’s allowed to come along.

Where in Lucifer’s green beard is Nina?!

The number of the beeeaaasssttt!

I hate to be pedantic (Not really) but the number of the beast is actually 616, as revealed in the Book of Revelation dating from 1700 years ago.

I didn’t know that.

That’s funny. I seem to remember it as 626. But I don’t have my bible at hand so I can’t check it. Maybe it’s different in different translations? Can anyone read the original Greek?

My ThD brother has studied the Bible, Ancient Greek (he has taught that at the Uni level), and Theology.
According to him, the Greek text is explicitly, “Six hundred, Sixty and six”

I love that Torment is the title for comic #666 XDD

Besides that, do you recommend Dragon Quest 9 for a DS owner looking for a great rpg besides Pokemon??

Also, Maison is very good. Only other one with an ending that Rumiko Takahashi made is One Pound Gospel. I recommend the latter over the former, but they’re both awesome.

I picked up Dragon Quest 9 the other day, and I’ve enjoyed it. I’ve definitely played worse games. Plus it seems fairly adaptable to your own, personal style of play. At least it has to me, so far. And Pokemon isn’t a great RPG. It’s fun. It’s even a good RPG, it’s just sorta standard. And it’s the same thing that was released for the Game Boy when you still had the choice between black and white or suck it (suck it = Lynx or other portable system of the day. Needless to say, none of them are currently still being made/updated/etc.). A few added features, (breeding, Effort Values, a couple new ways to evolve things, whatever poke-snack they have), but no real changes. Pokemon Ranger was an interesting twist, and if they could adapt something like that, or give an alternate path where instead of Gym battles you can Contest to advance (giving contests more legitimacy than a side-game), or even alter the story so you aren’t a ‘new trainer setting out on your journey’, I could see calling it a great rpg. (sorry, not trying to be bitter, insulting, or mean, but I’m sort of an RPG snob.)

Although I’m not sure if Takahashi had access to it or not, the One Pound Gospel story has been done several times under various names in the west. That being said it is an easier to digest story (shorter if I remember right), and more accessible to Western audiences (less explanation needed of why it would be embarrassing to have hot dogs cut into octopuses, not needing to explain why a student would be studying but not going to school at the same time, etc…) The short of it is, if you aren’t into Japanese culture at all, One Pound Gospel is the way to go, if you read Manga or watch Anime regularly enough to understand some less common foibles, They’re both great reads. And to be fair, she DOES end her works, just… well, Ranma had the “They aren’t together now, but they will be eventually” thing (I can’t help but feel that was influenced by the T.V. and movie series still going on at the same time she ended the comic. I could EASILY be wrong, and am too lazy to look it up). There were other, short works (horror, romance, etc…) with endings that never got half as popular as Lum, and since those are the two (Three if you count Inu yasha) people tend to remember… Well, there you go.

Damn, I really let myself ramble there.

You expect an ending… from a Takahashi series? Pardon me while I go laugh like a madman.

Okay, back to the comic… Jessica should just tell Ed to wait a bit, and go put on some real clothes, I’m pretty sure he wouldn’t mind sharing food with his sister, besides, Ed can deliver the fury, if she wants to stop James from spreading her hotness, unless she really wants to be Sideburns-Chan, although both she and Ed are borderline muttonchops with those sideburns.