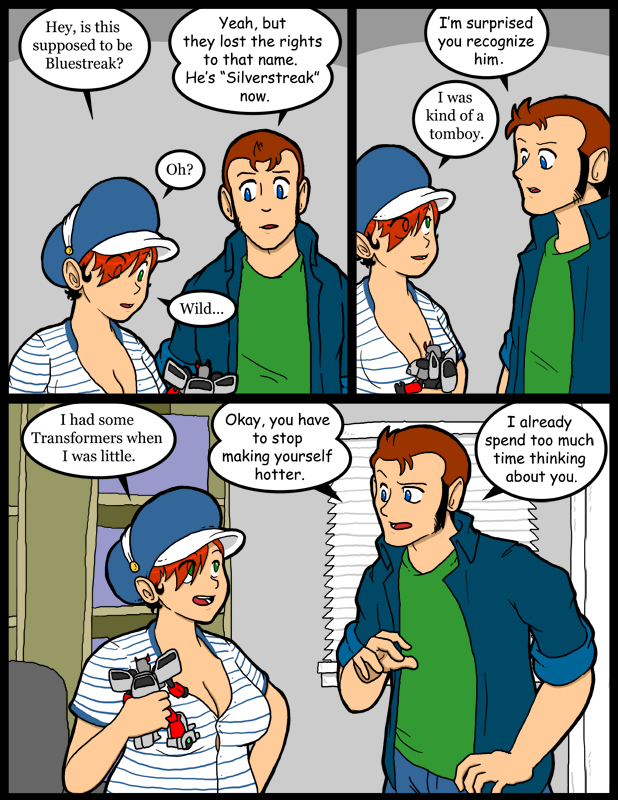 I actually don’t remember if what Thomas says in the first panel is true, or was ever true.  That part of my life is so distant now I see little more than a mist when focus on it is attempted.  I never had Bluestreak as a kid, but I thought his bio was cool in the comics and stuff.  Haunted by the destruction of his hometown, he tries to drown out the memories with constant banter.  Some of the back stories for those guys were pretty advanced concepts for an eight year old.

Eventually I got a Bluestreak of my own.  He was the second Alternators mold that started as Smokescreen.  They gave him a new head though, which is really all I ask for in a remold.  At least give us a new face.  I have the Ricochet repaint of that same mold too.  By that time the mold was apparently showing some wear.  The parts don’t fit as cleanly as the Bluestreak’s.  The Alternators line was one of my all time faves.  Of course I never could collect all the figures.  As with all Transformers toy lines towards the end they made it far to difficult to obtain the last few guys.  I’m missing Mirage, Ravage 2, Hot Rod (Or Hot Shot, or whatever they call him now.), and the generic Japanese guys from the Kiss Players line (which are arguably not part of Alternators anyway).   There may have been more, but I’m not aware of them if there were.

I always considered the Masterpiece line part of Alternators too.  Someday I’d like to get the Grimlock they did.  Hopefully I’ll run across a relatively cheap American release at some point.  Megatron was my last insane Transformers toy purchase and unless my fortunes change drastically it’s going to stay that way.

Hottobot is her species name, you’re still a hottobot if you transform.

Yes, but her sub-species is Hotterbot

Somebody told me that the trademark this is, indeed, what happened with the name change.

so i cant believe it but i just read this entire thing from beginning to now in one sitting. its official im hooked :)

I took 3 days. Now have to wait for new page day. No fun.
Will start reading again in a month, when 100 more pages atleast.
Cool comic btw.

See you in a month then. Many readthanks to you.

Did you ever get Universe Classics Silverstreak?

Yeah, he was one of the last ones I got before the movie lines took complete hold on the market. Alternators was a way better sculpt though. They should have stuck closer to that design I think.

I’m pretty sure old Bluestreak is going for a motorboat on panel two.

If only robots could feel!

Most Epic Line ever

Every so often I manage to cobble one together. XD

Seriously. Too hot. Stop. You are abusing your great talents and it can only end in disaster.

I’m really loving the chance to see them interact outside of work, but I hope the whole of this chapter isn’t just the two of them at his place.

prepare to be disappointed.

Dang. I can’t place the reference.

I seem to be acting like Cool Hand Luke: “Come on, top button! Pop!”

Gotta wonder where my priorities are when the given scene has a woman just about popping out of her shirt and i’m thinking: “Hey, I have that toy!”