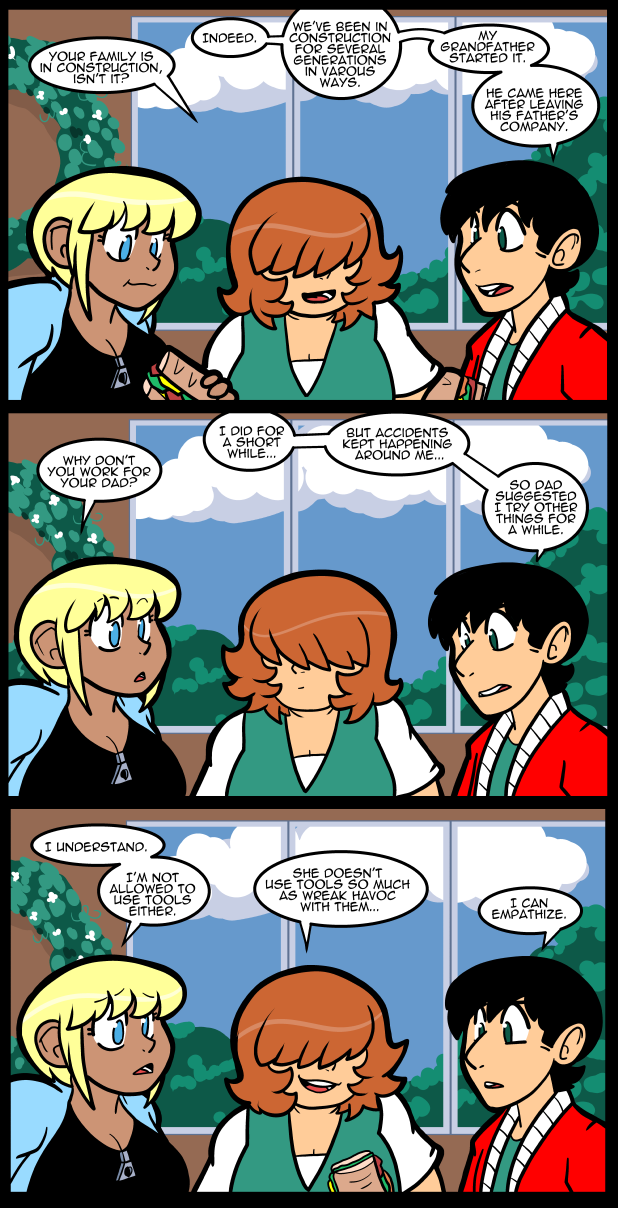 It amuses me that Maddison’s relentless optimism has softened Reggie so much towards her. The fact that he’s into Alex probably helps too. If he had crossed purposes with them he would be so mean… The duality of Reggie.

Everyone said Hollow Knight on the Switch was awesome. Like the sheep that I am I got excited for it, even though the bug art makes me itchy, & got it. It’s so good. I’m pretty sure it gets punishing as it goes on, but if you fuck up it usually feels like it’s your fault for not being good enough instead of the game being cheap. It’s not always like that, but more often than not. The environment is a bit busy & it’s sometimes hard to anticipate hazards though. I mean, it’s not perfect, but it’s so well done. It’s about as close as you’re gonna get.

It will either be sexy or very painful.

If you love Hollow Knight, be sure to try out Ori and the Blind Forest and Owlboy. Those games are the bee’s knees!

Are they on Switch? I don’t recall seeing them in the store.

While Ori and the Blind forest is very unlikely to be on switch. (Microsoft/PC exclusive I believe.) Owlboy is on the Switch.

I don’t know about physical, but it does have a digital copy.
https://www.nintendo.com/games/detail/owlboy-switch

Owlboy does have a physical release on Switch as shown here: http://www.neoseeker.com/news/29471-owlboy-getting-a-physical-release-in-may-for-switch-and-ps4/

Ori, unfortunately, is a Microsoft exclusive so you would only see it on XBOX and PC. :(

Yay more Reggie. I wouldn’t trust Madison with anything more dangerous than a can of tuna.

And even then it would be one of those foil topped style of cans.
Pull tab? Blood ,,,, soooo much blood.
Can opener, the possibilities are as endless as the designs.
I use this one due to members of the household having to deal with arthritis https://imgur.com/7WuWLAU still requires some dexterity to use but no power cords.

It wouldn’t surprise me in the least if Alex tries to get Reggie and Maddie together. Because a power couple that can’t handle power tools amuses me to no end.

Am I the only one here who wants to grab Maddison’s zipper and tug it down? ;-D

No, you’re not the only one. But remember, get her permission first.

I think the zipper is stuck anyway. :/

Yeah, I totally get Reggie. I’m not allowed to use power tools due to a couple of unfortunate mishaps that I still contend weren’t totally my fault.

Yeah! What is it with that? You cut your finger off a couple times and they won’t let you use the slicer anymore! Sheesh!

Hey so I don’t know if you know this (you probably do and I’m going to sound like an idiot) but whenever one of your characters goes to say “yes” they say “indeed” instead. If all the characters say that isn’t it a bit of a tonal problem? Especially because it’s not really a common response that people give. I think you’ve been trying to establish a unique voice for each character and “indeed” might be taking away from it.

Specific characters say indeed instead of yes. Reggie, for example.

My friends and I say “Indeed” all the time… It’s actually pretty common where I live. Different locals have different norms in speech.

It’s actually very common where I’m from too. Mostly because I used it so much it passed into the common parlance among my peers.

I say indeed the majority of the time. I’m a bit odd to many friends when it comes to my speaking patterns. According to a close friend I speak old fashioned. I don’t see it. I believe she feels so because she’s more likely to speak as if she texting where as I prefer to speak more like I’m reading a book. That’s a simplified way to explain the differences. One reason I enjoy this comic so much is not just what’s said but how it’s said.

I don’t think so. The only thing it can build is an orgasm.

My ex boss (not for this reason) got the bright idea to use a full size cut off saw (14″) off the base free hand to cut metal. He handled it fine… until I tripped on the cord and it pulled the blade into his arm. An abrasive blade, so just a burn, but he was kind of upset.

Is it only tools they have issues with or do even smartphones break when they use them.

Disappoint is misspelled in the previous strip. And that disappoints me (:

No it isn’t. You just haven’t refreshed your cache.

You sure? I am looking at Carol’s speech bubble in the last panel. I am using my phone though so cannot be bothered with cache and cookies. I do apologize if the pic i see there is not outdated

Is it me or is Reggie’s eyeline going right to Maddison’s zipper?

Maybe Reggie should follow in his grandfather’s footsteps and start his own company. Its clear when he has good support he’s very competent.