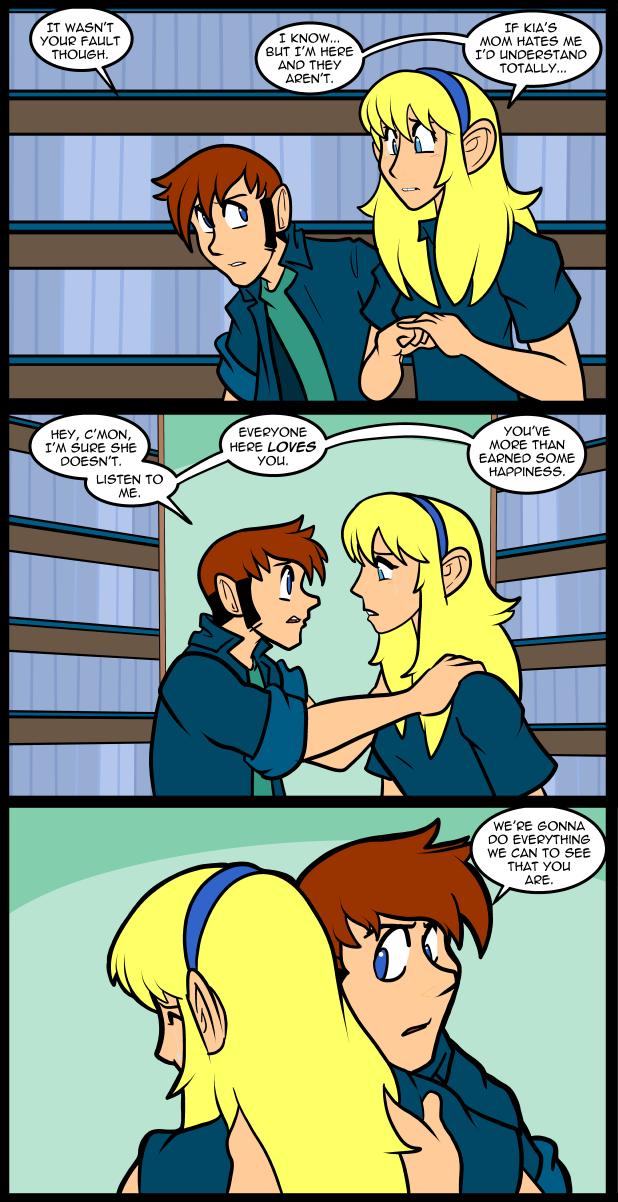 Here is a link to more Nina’s already exposed backstory.

English is a very particular language that likes to be precise. In most areas you can cut and recut words into more and more definitive ways to say something until you say exactly what you mean. Even so the language still manages to fall short sometimes. The word love is one of those words that somehow tends to lack clarity when English speakers use it. When you tell someone you love them they have to rely on context. The Greeks were a little better about being clear with what they meant when invoking love. Philia is a strong, what we call brotherly, bond. A deep, meaningful, friendship. The opposite of that was phobia; an abiding disdain for someone. We use the words in conjunction with other things now, but rarely by themselves in reference to a person. Thomas and Nina share a deep philial love for one another. A strong friendship forged in the fires of hardship. I think that even though they might not know it themselves they are best friends. Or maybe they know it, but haven’t put it in those words to themselves or each other. Thomas is his most real with Nina. The pretense of what he tries to be, even with Carol, drops away for her. That’s not to say that he cares less for his other friends, but he’s safest with her. Nina, on the other hand, is much more herself all the time, but feels safe sharing her pain with him. He doesn’t treat her pain like a burden, or embarrassment, the way other people might. I love writing them together.

I fell in love with the only girl I was ever that close with. If I were Thomas I would almost assuredly be in love with Nina. She would not be in love with me though, and I would be relegated to supporting cast, as is my fate.

First, also was nina in a car wreck? Cause that’s what it sounds like

Yes she was i was in her Senior year at least one killed and Nina was badly injured but beyond that not much has been fleshed out about it.

Do you remember where in the archive that was or have a link?
I’d like to see/read more on the mood during that reveal.

That strip and the few following are, to my recollection, the most in-depth explanation we’ve had so far.

Maybe this delicious recipe for turducken will tempt you to try it!

Some ingredients will be hard to come by but I’m sure you’ll find it worth it!

This is my first time commenting, but I’ve followed your comic for over two years. I must say that I share your sentiments with regards to having a Nina and falling in love with her, but I wish to urge you to aim and “be” that main character. (I know how dumb it sounds from someone who doesn’t even know you, much less have the capacity to empathize with you)

I think this is, quite possibly, one of the best strips to date.

I’m with you there, Jackie. I seem to fall in love with every girl with whom I become close. And I become close with girls pretty easily, for some reason.

Once I noticed this pattern, I decided to make the most of it and make it easier for those girls to love me back. I’m still improving, but hard work goes a long way. It’s never too late to start.

Hope things get better for you. Thanks for the wonderful story.

Just wanted to say, looking back at the backstory link and looking at today, your art is very much improved. I wonder if you see it.

Love is delicious, and warm and crazy, and it will break your heart every time.

Mostly crazy, though…
Then You meet that one Woman who shares some of Your craziness,
And You fall, oh, how You fall…

Then time passes, and leaves fall,
Flowers die,
And a stead old tree stands bare before the winter’s cruelty…
Alone.

Wow! I lost your comic years ago. Tried to find it a few times but couldn’t remember the name it had been so long. Glad you joined HiveWorks. Was randomly scrolling through for anything new when I was happily surprised to see Thomas’ red little head. :)

I have to admit, I never understood the reasoning behind “I understand if they blame me” when you know it wasn’t your fault.

Yeah…I don’t know why people do that.
Maybe, in Nina’s case, she wants to put the blame on [someone], just so she can put the blame somewhere, [in an event where blame might never be known...like maybe in this car wreck].
Ugh! Someone stop the philosophy-goblin from biting my neck! :D