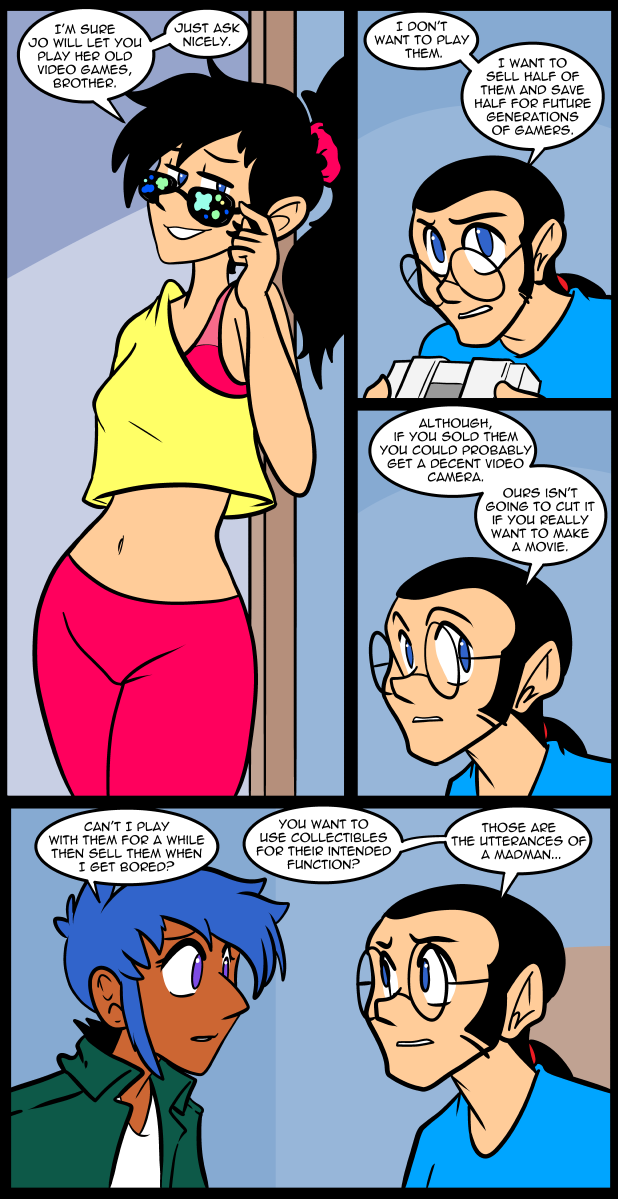 Jo wasn’t the only one who made out like a bandit. Jess just had different prizes in mind. Vintage clothing in the wild is a hot commodity if you know what you’re doing. The idle rich will pay for old shit, as well as the idiotic trendy. For Jess every box of dead people clothes there’s a hidden paycheck. Of course the full scope of her plans have yet to be divulged…

It is really hard to replicate day glo colors in manga studio. I tried my best but that’s as close as I could get. I chose those colors because she tends to go for blues and wanted to kind of set things on fire with her this time. She is at least as amused as I am about being dressed like an escapee from Clarissa explains it all.

The teen got broken up with by her distant boyfriend, which is good for her, but she isn’t in that frame of mind over it. I spent last evening indulging her sorrow, which is probably dumb. The guy in question is too much like I was at that age. the chances of him amounting to anything much are slim. It’s debatable whether(weather?) or not I did. He’s gonna play call of duty until life kicks his balls off and that will begin his long, grim, slide into mediocrity. The teen doesn’t need that in a boyfriend. She needs a go getter who can handle a level of clinginess on par with superglue. I don’t know how many of those exist, but they must be mostly saints. I have a sinking feeling she will get back with him even though he broke it off this time and all of this will have been another pointless exercise, but whatever. She’s coming to a point where she’s just going to have to make choices on her own and deal with the consequences without whatever benefit my presence allows. Hopefully at least a little of my judgmental attitude rubbed off on her so she can properly distance herself from the rabble when it matters.

Tonight she is out seeing the superbat movie, so I’m not sure how to judge her ability to make choices at this point…

I could have gone too, but I decided to stay in and work, because… I’m insane? I can’t enjoy life unless I know I’m trying to do a good job making this comic? I need to work constantly to feel even the tiniest shred of safety in my life? It’s somewhere in there I suspect.

Or, more accurately, of a madwoman.

Arrrrg! Ya beat me to it! *TRA passes you a Willy Wonk-thing Golden Ticket* :D

Freak this internet thing. I mean Spencer beat me to the “madwoman” line. C’est la vie.

Since he’s being facetious anyway, sticking with “madman” emphasizes that fact while still getting his meaning across.

Like my fifth-grade writing teacher said: “When you know the rules and the reasons for them, you’ll know when, why and how to break them.”

Speaking as a man who is madly in love with, and sharing a healthy relationship with, a lady who has OCD, I can tell you such people exist. Separation anxiety is a HUGE deal for her, and my experiences with her have taught me much about things like patience, humility, and responsibility. I can’t tell you how profound it feels to share in a loved one’s growth and progress, to encourage them and see them grow, much like how sh’es done for me. I feel it takes a high degree of maturity to develop such a relationship, so for her sake, I hope the teen can find someone who can do right by her. Or even better, learn to be patient enough to help another who might be clingy. It isn’t easy!

It’s not like these games were unopened and in their pristine condition packaging were they?

Even in an opened box chronology trigger can fetch a pretty steep price.

That seems to be the rule of thumb for SNES and Genesis titles, but not too much for every other console. The NES and consoles other than the aforementioned two depend on rarity and popularity more than physical condition. That isn’t to say a game complete with original Saran-wrap won’t fetch a hefty sum, but that game had better be something like “Final Fantasy VII” or “Splatterhouse”, and nothing like “Spice World” or “Walking Dead: Survival Instinct”.

Man, Jess is really rockin that 80′s look! Also, great to see the SNES in there. Jo really hit the jackpot on that trip.

thanks for bringing back the nostalgia feels Jackie. I’ve still got Crono Trigger on my 3DS and other games on emulators, but playing them on the original consoles just can’t be beat.

Things are ment to be used. So Jo your in the right. Also 80 Jess I think I’m in love

If it makes you feel better… working is a more enjoyable way to spend an evening than watching Superbatsteelman.

And yes everyone, Chrono Trigger DOES go for absolutely ridiculous sums of money. Even after the PS1 and DS ports tamped it down for quite a while, it still commands three digit prices. This comic is very true to life in this regard.
Pretty much anything Nintendo-related is absurdly overpriced these days, as speculators viewing their purchases as investments to be resold at a profit continue to push prices upwards.

The teen was MASSIVELY disappointed. This is a person who thought Pixels was okay. Wanted to leave after an hour. Stayed because her friend was with her who also ended up hating it.

I kind of liked the batsuperwonder[wo]man movie.But then, I’ve been a big fan of The Batman since before Adam West. I’m familiar with all of the source material that was referenced in the movie and was able to fill in the (rather huge) holes in the narrative. So I could follow the story fairly well. I even gave a big cry of relief when Doomsday grew his crystalline spikes. If you aren’t a fan boy, a DC, or a Batmaniac, the movie is probably not going to tingle your tantalus. It’s just too sketchy and disjointed. The most fun I had that night was trying to guess who was going to be in the JLA from their logos (Cyborg is a frickin’ Teen Titan, yo! And where was Green Lantern? …and Martian Manhunter? Aren’t they metahumans?) .

Just wanted to post I love this comment and the word you are looking is whether, as it is a word to help split a sentence into two paths while staying on topic (at least that’s what I use it for) while weather is used only in regards to nature in the physical way or abstract asin whether to say the weather is nice out or to weather the storm of misplaced hat we live in today

Also, ASIN: Amazon Standard Identification Number. ‘As in‘ is a phrase used to denote an exemplar case.

while that was more from speed typing on a phone without autocorrect thank you for correcting me^_^ I never knew ASIN was actually anything.

Yeah, I think you nailed the Day-Glo thing. Back in the late 1960s, I had several jars of fluorescent, black-light poster paint. Her pink and yellow are about as close as you can get without getting a photo and sampling it.

I think Ed secretly wants to sell half of the Nintendo stuff and have sex with the other half.

So, I might end up using that last panel as a reaction to other utterances of nerd logic, and sadly it doesn’t have your name, website, or comic name on it. I’d just like to let you know before I do so, and I’ll link people back to your comic as much as I can.

Wow, Jess is hot enough to pull off any look but when I first saw the page, I was like, Damn!

Yeah, collectible [ video games, toys, + other collectibles], can be a bizarre thing.
Like the 1st Barbie doll, from 1959, with her black + white swimsuit, + sunglasses, + shoes, can command a cost of $2,200 – $3,800.
People wanting the originals doesn’t bother me, but you probably could hire someone to make a copy of the 1st barbie, for about $50-60. Collectibles can be strange.

I’m sorry, but this girl needs to be bitten on the right thigh, by me. Teasing has consequences.