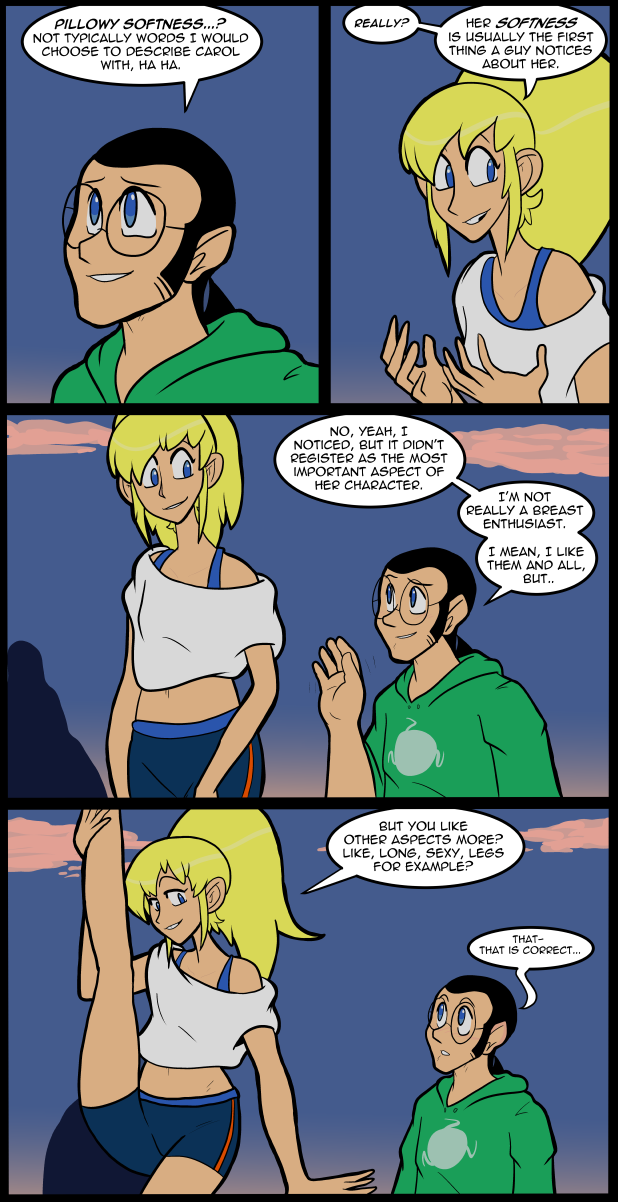 Don’t get into a high kick contest with her is all I have to say.

I’m really sleepy right now. I slept through two alarms this morning and still want to sleep. Luckily I had already done several of the tasks I thought I hadn’t already done that I needed to do today. I don’t remember when I did them, but it was like a present from past me for all his shittiness. It does worry me slightly that I have no recollection of doing the things, but a lot of the things I do are repetitive, so maybe they specific memories were purged for lack of being unique.

I think the drawing of Ed is officially the least successful of the ebay drawings. He didn’t manage to beat Reggie, which would likely piss him of quite a bit if he knew. I overestimated his popularity. Or maybe the drawing itself was substandard. Regardless, it’s a new failure by which to mark the passage into a new between time. Rather than draw Mike, which I didn’t feel like doing, I decided to go with the suggestion of the single commenter who had an opinion on the matter, and draw Victoria. We will grind Ed’s failure into the ground by celebrating the family of his rival.

Teen corner.
hello world im back again! shocker huh? I just spent all day at the lake swimming and tubing so I am tired,sore,and sunburnt the 3 best lake qualities! lol it was a lot of fun I was also a chaperone for my 17 year old friend and her boyfriend they were lovey kissey and gross the whole trip ugh relationship people! now I plan on snacking watching movies and sleeping lots!!!anyways that sums up my day until next time – the teen

Ed’s eyes in the last panel are such a look of awe and wonder. Although I wonder if Nina’s flexibility is at work as well ;-)

The drool to the edge of his mouth is just baaaarely visible…..

Bonus points for not swallowing his tongue

Her foot is up there somewhere, right?

It’s on the edge of space.

yeah…we kind of forget she was a cheerleader…

…what with all the time she spends around books.

Honestly, I think it’s Jackie that’s teasing us a bit at this point.

Well MISSION ACCOMPLISHED! I’ve read about people like you sir:

A small round of applause for the linker of TVtropes

Not to be confused with an Inglourious Basterd. But one can certainly be both.

Teasing? I’m surprised his brain is still functioning. I’d have blue-screened and would need to reboot at this point.

oh nina…. honestly thats all I can come up with.

Also, plus points for her amazing balance!

You gotta wipe the slate clean before you turn him into one of your mindless sex slaves!

Jessie already did phase one before they left the house, this is merely phase two.

Hm… I’m impressed by being able to move your leg up that high.

That said I don’t get the whole ‘leg’ thing. They’re nice. I like legs. They get people around pretty well. But past that not for me.

PS: Were I to have the money I would go for a Mike drawing. He appeals to me moreso than Ed.

Well I guess I get that its hard to get at first.

For those of us that do though, the thing about legs is that they go ALLLLLLL the way up to your a–

[expletive string deleted] I LOATHE virtual keyboards on smart phones. There needs to be a button or menu option that allows you to set the ‘dismiss’ function to manual or add a button that allows you to lock the virtual keyboard in place.
Anyways, I think the whole leg thing has to do with appraising mate fitness (or something among those lines). It’s probably partially learned and partially genetic (my money is on it having to do with pleiotropy).
But then again, I’ve also postulated that the whole of an individual’s sexuality (including turn-ons/offs and kinks) are the grand result of a long complex series of conscious and subconscious decisions starting shortly before the onset of puberty. I’ve compared it to a skill tree system before. With each decision opening up multiple pathways to new decisions that would be made later down the line. Of course, there would be a fair deal of intersecting branches, especially for the more important aspects. And some people would encounter a lot more of those intersecting branches than others based on individual experiences and choices. Of course, the starting point and some of the first decisions (most of the first ones are subconscious) are based on one’s early childhood circumstances and experiences. Some people get a jump start on that process.

TL:DR Odds are it’s a hell of a lot more complicated than “born this way”.

So are we getting a wallpaper sized version of those legs?

Ed must have the biggest hard-on right now.

Ed needs to keep such excitements reined in until she’s ready to have them herself. Which, at this point, is extremely difficult to tell…but don’t screw it up, man!

Turnabout is fair play you know…

He should come to work dressed like a Hogwarts student. And riding a quiddich broom in highly suggestive fashion…

I think her leg is doing one of those spacey-wacey time lord things. (probably more aptly described in her Doctor Who Harry Potter fan-fic cross over)

Would that be Hammer Space?

Her foot maybe going there but I was actually referring the apparent size of her leg.

That hero of Mind hoodie, Ed must be a fan of homestuck

Oh most definitely. Not so sure if he’s as much of a “mind” hero as a “blood” hero but that’s my own musings on the matter.

I’m like Ed. My thought process on breasts: “Does she have two? Yes. Okay, we’re good.” Legs, though? I like them as long and shapely as possible.

Hmm, I can relate to Ed on that last panel, I’m a bit of a leg man myself…

I feel like such a wet blanket. I can’t get over the position of her left leg while she does a high kick/split. It doesn’t make sense in my head.

Well start getting over it because I checked to make sure it was physically possible and used reference to draw it.

Looks about right to me. I took one semester of dance in college (surprised I didn’t get laughed out – being a tall guy with the starts of a belly back then I’m sure I wasn’t the most aesthetically pleasing participant.) I distinctly remember how hard it was to keep my hip even remotely straight while trying to lift the opposite leg out in front of me. Your body wants to balance itself by moving your center of gravity over top of whichever leg is holding you up – so you shift sideways and your leg turns inward at the hip – try it!

I’ll have to agree. The pose is, I think, a standing side split – it’s like doing the splits while standing and hugging one leg. The more parallel you get your hips, the more flexible you are.

I think the reason it tweaked me out was that her lifted hip is lower than the planted one, and the left leg is bent, so she’d likely be in a pile on the ground because she’s off-balance. But also, the lifted leg is more rounded away from her body than straight and against it. It’s a hard pose to draw and to have had it better, her leg should’ve been RIGHT up against her torso. It does look a little weird.

I hope that’s taken as constructive criticism and not negative criticism. As I said, it’s a wildly difficult pose to draw and get to look natural because the pose itself doesn’t look natural no matter how you look at it =)

My Dad once had a mountain climbing teacher. This teacher looked like a flexible Grizzly Adams, + could lift his foot over his head, a la Nina’s leg lift.

But…since I find Nina sexy + cute, + I don’t think of the Grizzly Adams-guy in the same way, The G. Adams guy makes me think of different thoughts. Hm.

The thirst for Ed is real

Nina knows what people want when it comes to intimacy, and when it comes to Ed, she’s going to try the “be extremely obvious about making you assert yourself and reveal what you want in tiny increments” approach.

It will break him though

Thanks for taking my suggestion.

Also, thanks for almost breaking me with that last panel today. GJ

Oh Nina, you terrible terrible woman. Playing with that poor man’s emotions like that…

BTW Jackie, you DO realize that you’ve given ample cannon fodder to the self appointed enforcers of “Rule 34″ of the internet, right?

Appropriate since Nina is one of those who feeds that particular beast on the internet in her world. (and now in ours. Worlds within worlds.)

Well, she broke Ed, time for a reboot, he has bluescreened.

Everyone is pairing off neatly. At this rate, John is gonna end up with Wes or Mike by the pigeonhole principle.

Until it all ends in tears of course…

Why not cover all of the possibilities? A story could be written, where John ends up with Wes AND Mike.

Envy for The Teen. Some of use only get to become tired, sore, and sunburnt mowing endless oceans of grass that their families feel compelled to own!

To quote an old commercial for the Dead or Alive Video games,

Defeated by Nina is one phrase

Ok….new to posting comments here but….and this is stupid of me….isnt Ed wearing a hero of mind hoodied :3?

Nina’s got legs for days. MM!

Dude, she could wrap those legs around you twice.
Hurm.
I’ll… be in my bunk.

Damn I’m jealous of those legs! Nina’s body type is a lot like my sister’s. She’s tall and elegant with legs like a racehorse, and I’m short and squishy. When I work out my legs turn into thunder thighs rather than looking like Nina’s. Get it Ed!

No worries, there’s room enough in our hearts for all kinds of thighs.

So the ad below the comic perfectly shows what Ed is thinking right now.
http://i.imgur.com/qhaaTFd.jpg

MMm her legs and ass are sexy and so are her boobs and belly.