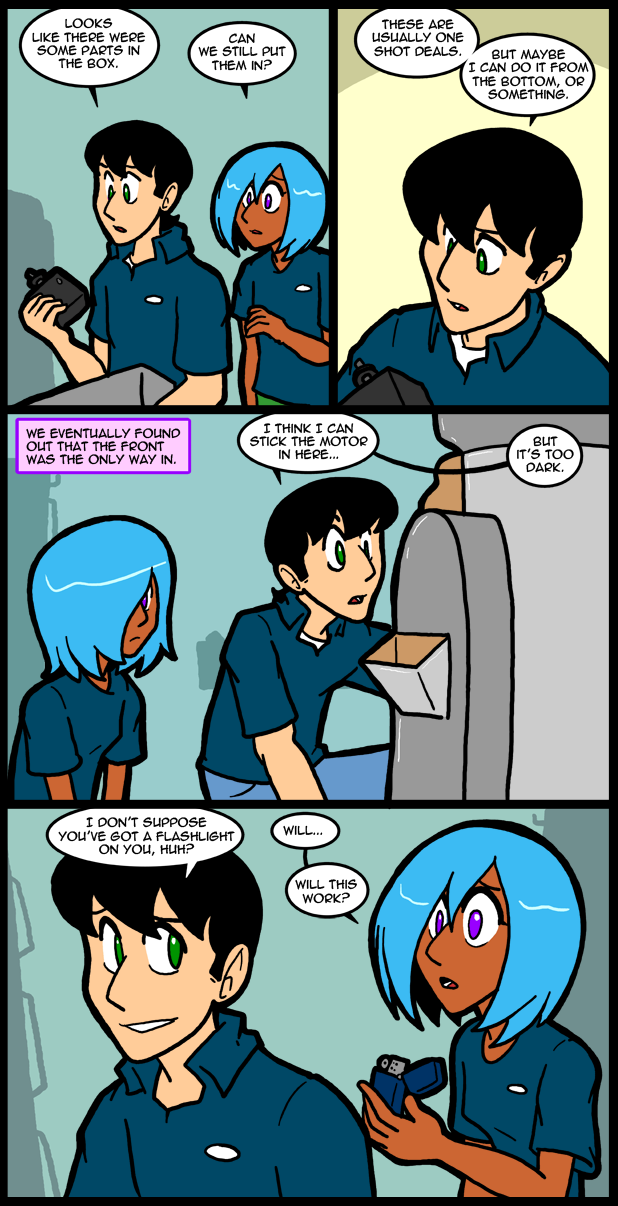 This flashback tells the story of something that the characters have alluded to in the comic at various times. I’ve always called this kind of thing Implied Past. Colloquially they are called Noodle Incidents. Implied past allows characters to seem like they’ve lived complete lives without having to stop and explain every exploit in the middle of the current story.

I don’t typically write backstory off handedly. If a character mentions something I’ve worked out enough of the story so that if it ever became important said character could relate the tale. I always intended to tell this story eventually. I wanted someone else to actually draw it, but I was going to tell it from the moment it was mentioned because it’s important for the relationship between Jolene and Reggie. That said, in the original version Reggie was the one who carried around a lighter. In spite of the fact that it makes no sense at all. For whatever reason that’s how I wrote it. When I dug out the files so I could start this flashback I finally noticed this glaring error. Clearly Jo would have a lighter on her. I’m not sure that I would have noticed this if I’d handed it off to someone else, but I’m glad I did because it makes much more sense. In fact, I think someone suggested it in the comments. It was hidden in plain sight, I guess.

The Teen has a play tonight. This being so I’m making sure that everything is ready in advance. I’ve been helping her rehearse for a while. Her part is small, but she’s very nervous about it. I can hardly blame her. I hate being in front of an audience. I can do it when called upon, but I avoid it whenever possible. It’s ironic that my job is basically spending all day in front of a virtual audience.

Someone guessed this was leading to the fire incident Wednesday. Seems they were right.

My guess was close but missed entirely at the same time. I thought (hoped) this would be a reversal with Jo causing the fire and traumatizing Reggie making him psychologically prone to fire whoopsies etc… Instead it is apparently Reggie’s first fire whoopsie.

Guess I was over thinking it.

Well, fire is obviously gonna play a part in the way Reggie is such an asshole, probably due to some accident that he took the rip for.

If your comic was set in the Resident Evil ‘verse, then Reggie would be the only one legally allowed to be carrying a lighter right off the bat. Jo would have to collect three games from opposite sides of the store, place them in the correct order, then go move a bookshelf to find the lighter.

….That sounds really random and I don’t know why that line of thought occurred to me.

She seems so hopeful that this could be easily solved.

Oh. This does not bode well.

Although in the fiery moments leading up to her demise she will probably look several times more badass!! ^0^

And so it begins.


What music was playing when you created this?!

So wait,… Is it because of both Jo and Reggie that everything falls apart? Because of their lack of skill on building?

I don’t smoke, and I often carry a lighter. You just never know when you’re going to need to set someone on fire.

So (IMO at least) it wouldn’t be *that* odd for Reggie to have one.

“It’s ironic that my job is basically spending all day in front of a virtual audience.”

Virtual is a bit different to public speaking, i find it’s even easier to talk over something like skype/teamspeak to tons of people then doing it in person.

When the person’s there the problem is you can see the Expressions and body language and it makes people feel nervous/worried about what the people will think, and it’s less apparent through text/speech only.

Irony is that the ad for LFG’s orphanage attack is up to the right of this for me and it’s just reinforceing the Oh Crud potential.

So, will this Great Noodle Incident be as epic as the one in Calvin and Hobbes?

Also, props for calling it that. It’s always nice when someone remembers the Great Comics of ages past.

i can see where this is going XD

… The fire. So that’s how it happened.

… This is BOTH their faults! Jo shouldn’t have offered something as volatile as a lighter for a light source and Reggie shouldn’t have been so stupid to accept it!