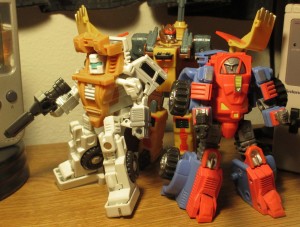 I vividly remember Christmas the year Transformers debuted. My stocking had a pile of them inside. All but one of the mini bots: Bumblebee, Cliffjumper, Huffer, Brawn, and Gears. I was wildly disappointed. They were not what I expected at all, to the point that I asked my mother if they were really transformers. Having never seen them in an official toy catalog I was sure that something had gone awry, and my mother had been duped somehow. Little did I know that this would be a theme in the Transformers toy line for many years to come. They had been presented to me sans packaging, but once we got home Mom gave me the card backs and it was all too clear that these were official toys and Hasbro just didn’t give a fuck about what they looked like. I accepted this injustice grudgingly. These little guys were some of my favorite characters. Especially Brawn, who was super awesome on the show. I also identified with Huffer and Gears because they were dour, whining, assholes and, though I didn’t fully understand it at the time, so was I. I broke Gears within the first few days of having him, which devastated me. My toys from that time outlived those of other kids by years, so I could hardly fathom having been careless enough to allow Gears to come to harm. At that time glue technology was sadly lacking and there wasn’t anything that would properly bond plastic to plastic. Gears remained injured. I was lucky, however. The break happened in such a way that I could pop the leg back into the socket and it would stay in as long as I didn’t stress it. He was even capable of transforming without losing it. Because of this his injury became, as Nintendo might phrase it, a feature. Whenever shit got real Gears would lose that leg and Huffer would fix it. (I didn’t have Ratchet.) he became integral to many of my stories as the ever suffering martyr. Bitching about his bum leg to whoever would listen. His buddy Huffer listening to him complain constantly, but always fixing him up. I still maintain that this intricate play style contributed to being able to write well later on in life.

I didn’t have many big ticket transformers. In fact I only had one bad guy for ages; Starscream. Because of this Starcream had to really up his game because it was him versus everyone else. Much later on he was joined by Astrotrain, around the same time I got Outback, who was also a mini bot. Outback is a retooling of Brawn, so I thought he was spectacular. My Brawn had been played with to the point of nearly falling apart by that time, so Outback took up the mantle of awesome jeep guy. He didn’t look like his character model from the show either, but by then everyone had learned to accept that Hasbro was firmly holding on to all of its fucks. Anyway, as you can see, those little guys were a pretty big part of my childhood. As the years have gone by I always hoped that they would get decent remakes, but it never really happened. Not for all of them anyway. Bumblebee got his classic toy, of course, because he was a huge part of the shows and such. That led inevitably to a Cliffjumper repaint. After that, nothing. The rest of the mini bots were essentially forgotten about. Some newer toys were given their names but they didn’t get homages the way Bumblebee did. Much later on Cosmos did, but I could never find it. Later still Brawn and Beachcomber got mini bot remakes, which were fine, but didn’t satisfy my desires. The real insult, though obviously not intended, was Windcharger getting an honest to god classics version. I could never find that one either, but it was somehow poetic that the one mini bot I never had got the remake treatment. (On a side note: I once wrote a fanscript for a reboot of Generation 1 with a friend and we killed off Windcharger because I thought he was a tool. We honestly wanted to submit it to Hasbro, but the new comic series appeared about a quarter of the way into the script.)

Anyway, I told you all of that to tell you this: a third party group made homages to Outback and Gears. They actually made Brawn as well, but I didn’t have any extra money at the time. In all honesty I didn’t have it when I ordered these guys either. I could have spent the money on any number of more important things, but they were preorderable as a set and it was just too strange that these two guys, who were such big players on my stage, got offered as a group. I also tend to make worse and worse choices in proportion to how stressed I am at any given time. For me this is as close as it gets to binge drinking: unwise toy buying.

iGear is the name of the group that made these dudes. The Gears homage is called Cogz. GET IT!? Outback is called Bushwhacker. I’m just going to call them by the Gen 1 characters names though. Hasbro can just sit on it. 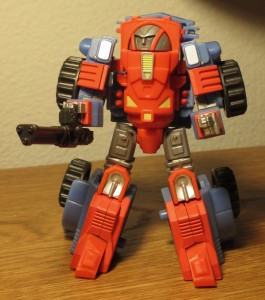 Gears is like a brick in both modes. Moreso in truck form, but he’s still really a solid lump as a Robot. This thing is about as perfect a reimagining of the old toy as you could hope for. I was still worried about breaking it, but that was mainly because of the trouble and cost this thing put me through. The joints are all fairly tight. To the point that I was worried about applying too much force to shift them, but eventually I figured it all out. Except for a few little improvements he transforms exactly the same way as his old toy does. His little gun was a nice touch, I thought. Since he didn’t have a guy originally I’d never given much thought to what kind he would have, but the little Gatlin suits him. He also has a little jetpack on his back, for short, likely horrible, distances. 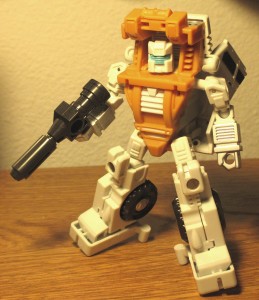 All the stuff about Cogz being a wet dream of what I wanted in an homage to Gears goes for Bushwhaker and Outback. I really makes me sad I missed out on Brawn, and more angry that Hasbro didn’t just make these things themselves for manchildren like me. Outback is a little daintier than Gears. He’s a little looser in the joints too. What the joints lack in tightness his grip on his gun makes up for. There is NO LEWAY. He has a deathgrip on that thing. It is unfortunate that it wants to fall apart. The two halves do not want to stay together. I may attempt to retool them a little to see if I can mediate their dispute. Anyway, his transform sequence is basically the same as the old toys’ as well, except a very clever thing you do with the legs. I was actually impressed with them. They basically work like a switchblade. Except they turn into robot legs.

Both of these guys have alternate faces on the front and back of their heads. One looks like their cartoon model and one like their original toy. It is INCREADIBLY difficult to rotate them. Which is why you get one version in the photos. Take my word for it, they look correct.
The boxes they came in had funny descriptions of the homage character’s personality, in the same manner as the old tech specs did. They were also very nicely made. Mine were almost totally destroyed by the USPS and Hong Kong Air, but if they had survived the trip they would have been really nice…
These guys came with a very clear and professional looking instruction sheet, and a little plastic character card. I really wish Hasbro included something like this with their guys. Although I have no idea how hard they’d fuck us for going the extra mile. Hard would be my guess.

Long story short, these guys are super awesome. Maybe not as awesome as what I paid for them, but it’s probably within 20 bucks of it. They almost make me want to try writing Transformers stories again. XD

Hmmm… The “Between Failures” cast as Transformers? You’ve already done them as Ponies.

I can’t draw Transformers for shit. Try as I might they always look awful. Except animated style.