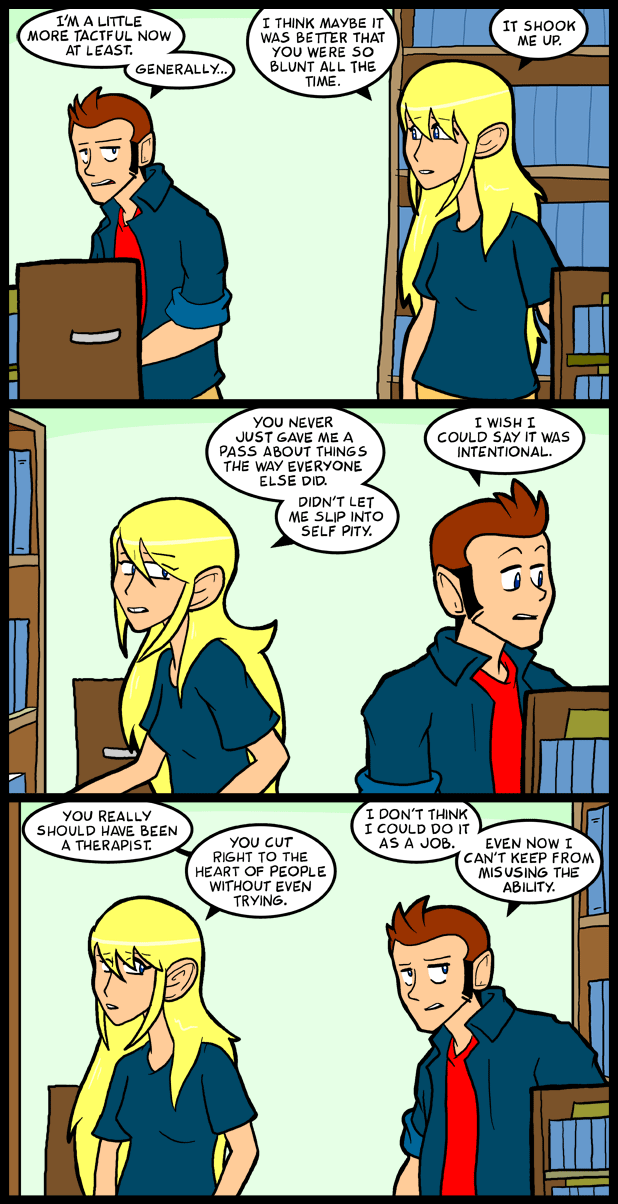 Final Fantasy 13 is a weird game. The battle system is just odd. If there’s another RPG with a system like it I’ve certainly never seen it, and yet… it seems somehow familiar. It reminds me a little bit of FF6 particularly. The leveling system is odd too. You can make some choices about it, but for the most part it might as well be automated. I can see why people have such a hard time explaining it. It almost feels like a fighting game some of the time, and everything happens very fast. Every so often though you get in to a fight that is just brutally long. You’re not in danger of dying, but the enemy has such a huge life gauge that it takes forever to finish. For the most part the game is good about not letting that happen, but when it does you remember it. The battles are usually quite short, but the game punishes you if you don’t pay attention. You have to stay involved in fights with enemies you’ve fought several times because sometimes they switch shit up on you and the strategy you’ve been using suddenly stops working. Next thing you know your party wipes and you have to start over.
In years past I would load a save if my party wiped because you’re usually punished some way for continuing, but with 13 I was just like “fuck it”. I don’t feel like dicking around with stuff I already did. Save spots are plentiful, but no. I have shit to do. I’m not sure if you lose anything if you wipe. If it’s money I haven’t noticed because I hadn’t purchased anything for the first two discs almost. You don’t really need to unless you want to make the fights even faster, I guess. By the third disc I actually started having money so rather than save it I just started upgrading my weapons randomly. It doesn’t seem to have much of an effect on anything, but whatever. Maybe the third disc is where that stuff becomes important.
It took a long time but I finally bought in to the story. At first I thought the voice actor for Vanille was just terrible, but now it seems like she was just pretending to be terrible to try and fool the cast. 13 is the slowest starting rpg I ever tried to play. You really have to stick with it. It’s not annoying though. Everything is very balanced. You play a little, watch a cutscene, play a little, watch a cutscene… and so on. So far every section has been a nice little chunk that you play, get done with, and move on from. It’s easy to play a little, save, and walk away from. And they give you little Pokemon style reminders when you start back up. There’s also tons of backstory you can read, which is a lot like Dragon Age. With dragon age it’s like who cares? Because everything pretty much makes sense. With FF13 I actually stopped and read some parts of the datalog because they don’t explain a lot of stuff in game. I’m still not clear on the geography of the world the game is set in. In any event it’s been a good time for the most part after the very shaky start.

I found that the story was rather engaging… I’m almost done with 13 myself. Let it fall by the wayside, though…. should get back to it. I think my major problem with 13 is that the game is a glorified hallway. There isn’t any going back at any point because… well… there are no towns. Not really, anyway. There are no NPCs that you see very long… that you can go back to or anything. That’s what I miss. I wish there had still been people in Fang’s village… or that you could go back to that one town that Hope was from and… you know, shop.

I was unable to continue Final Fantasy XIII for a rather severe reason: It stopped working.
Got my characters down onto the surface of the world (finally)… and seconds into the first fight, the game just freezes up. Completely crashes the console.
Tried again. Same result. Tried skipping the first battle, does it in the next battle. I’m unable to continue the game because it is fundamentally broken.

Turns out it wasn’t just my copy either.
Genuine flaw with the game.
I hadn’t really had any problem with it up until that, but that one issue soured me to it more than a little.