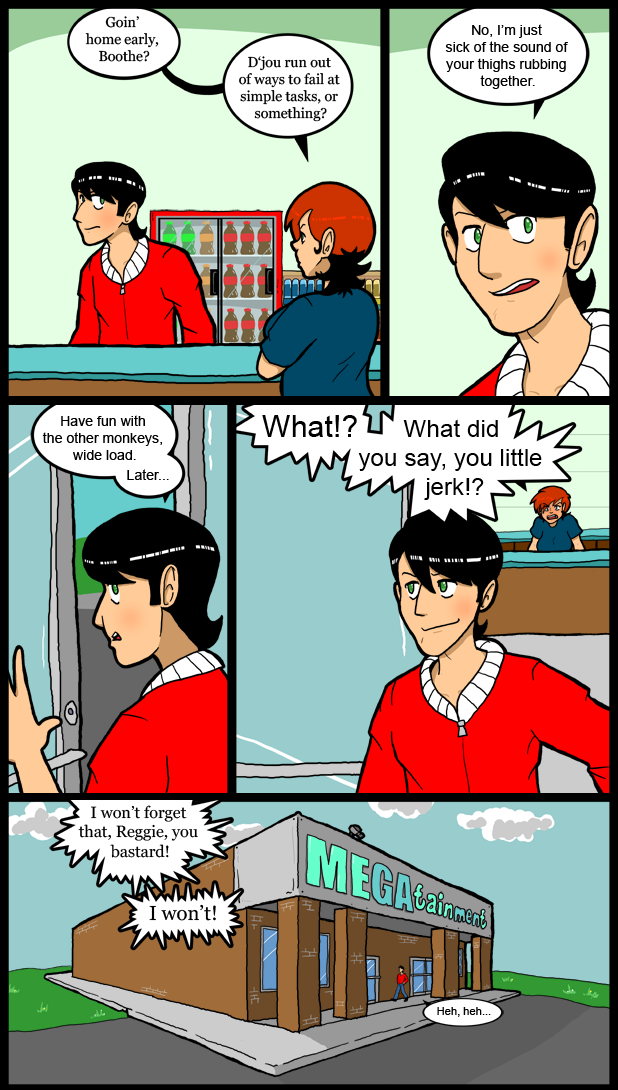 And there we have it.  End part two.  Reggie gets one last really good shot in…  that he will most likely pay for in spades later.

After all this time we finally get to see the store.  Literature teachers would probably even go so far as to call the store one of the characters.  I had trouble deciding on the scale of the place.  Architecture certainly isn’t my strong point.  In the end I just based it loosely on the store a lot of these story ideas came from.  I was going to have a friend help me design the logo, but then I decided that the point of the Megatainment logo was to express just how bad a logo can be for a poorly managed organization.  I chose the two worst typefaces, for this task, that Windows has to offer.  Like all buildings with lighted signs the lights have burnt out humorously.

Monday we start a new section of the comic.  On average the stories told will be shorter, although with 300 being the average length shorter won’t be a challenge.  Having made a few now they don’t feel nearly as different as I expected them to.  The only difference is that the goal post isn’t hundreds of pages away.  Now that I’m more comfortable with just making up scenery on the fly I feel like I can go pretty much wherever I like.

A lot of comic listing pages have Between Failures listed as a “workplace” comic.  Which is fine in so far as comic listing sites rarely express what a comic is accurately.  The choices aren’t particularly well defined in general.  I think situational comedy is a better descriptor, but I’ve never seen it listed as an option.  Why that is I can’t say.  You’d think it’d be a pretty obvious choice since some of the most popular comics on the net are sitcoms.  Although, in some sense, virtually all comics are sitcoms.

Starslip is one set in a science fiction world. PVP evolved into one.   Shortpacked!, Octopus Pie,  and Questionable Content also spring to mind.  Strangely, the last 3, save for Pie, break character quite a bit, whereas I don’t recall Starslip ever having and aside, or guest strip, in its entire run.  I could be wrong though.  I haven’t been able to read it throughly for almost a year now.  Those are just examples from my favorites list.  (chosen because most in my favorites are largely unknown and unpopular…)  I’m sure you get my point anyway.

You could hardly choose 5 more disparate comics, but they are, at heart, all sitcoms.   I think that should start being a category option.

Haha, wide load. I’m sure his head will be on a pike within a couple strips :/. As a fairly new reader, and with no real “about the comic/ about me” page in sight, i was wondering what your update schedule was? it said monday in the description of this comic, but is that a regular occurence, or is more of a vgcats/oots ‘whenever i damn well please” sort of style?

The M W F in the header image stands for Monday Wednesday Friday, which is the update schedule. I actually make them available earlier than that, but MWF is the official answer.

You should make it MTWTFSS. This might just become my newest addiction

If I could I would. Sadly I can’t draw these fast enough for that.

He’s cruising for a beheading, all right.

They also call Between Failures a “slice of life” comic…..which I like.

I seriously hope she beats the sh*t out of him.

Considering his purpose so far seems to be Butt Monkey crossed with Asshole Victim, that wouldn’t surprise me — although a Thomas-inspired revenge is also possible.

Y”know, with the speed, accuracy, and confidence that Reggie just delivered that line, I gotta say he just won.

so, i assume “taint” was the word humorously hidden in the sign?

wait it’s a stand alone store? I always pictured it as part of a mega-mall, one day we’d meet some employees from the store next door, ah well

If you could pan the camera stage left you’d see a shopping center.

Hmm… I thought that building looked a little familiar.

Oh, and didn’t you mean pan the camera stage right?

I would NEVER get tired of the sound of Carol’s thighs rubbing together. Especially if I could listen from very, very close to them.

With him getting insulted all day by Carol about his ineptitude, it really was only a matter of time before he could crack a good insult delivery himself.

Almost every single line he’s said so far was bad.
This one? Excellent.

It is his singular talent.

I think their war has been going on since long before this day.

Love Reggie’s grin in the fourth frame: do I sense character development? Seems like he’s absorbed some wit out of the air of that place, cos its oozing from the pores of everyone else.

Wit does tend to rub off on those close to you…

Bleh. Maybe I’m slow, but I don’t get the joke.

I think we can rule out the maybe.
He’s calling her fat.

Part of me feels like I should delete this for being needlessly mean, yet another part thinks it’s really hilarious. CONFLICTED!

You know… I don’t know the actual definition of that word. To the dictionary!

I only discovered BF a few months ago, and now I feel like I started reading at a very exciting time. It’s awesome seeing you start to branch out. Keep up the great work!

I’m just gonna assume no one’s made a crack yet and say that Reggie’s off to fight crime in southwestern Alberta.

No. Strangely enough you got there first.

Umm, that ad box below the comic looks a bit wider than it ought to be … not only is she cold and lonely, she’s overlapping the ads in the right-hand column!

And that’s the last we hear from Reggie for the rest of the comic. XD

Heh….I’ll admit that he deserved this moment.

Oh boy. Hell hath no wrath like a pissed off redhead. Target acquired.

That is what I call an awesome exit.

To make a statement. Yeah, Reg is a dick. Despite that, i was secretly hoping he’d get some sort of final shot.
That pizza’s been delivered.
I noticed that and figured, ” Hey, the guys has to have a spotlight of some sort.”

With Reg in the mix, we have all the “Essentials”. (otherwise known as the common fiction personality designations.) These are consistent themes for characters I’ve noticed over the years reading books and manga, and splashing some anime in there too.

Reggie is the Asshat, a somewhat essential character. UNLESS there are no other dirtbags hanging around or trying to kill the “heroes”, this Type will have to do.

Ed is the Loyal Lovable, solving problems for himself and looking like a badass in the process, intentionally or otherwise. Honesty is generally present. Intelligence varies for this Type, but i have found many characters like this that have no brains.

Brooksie is the Quirk Fest( questionable sexuality is not a need, but definitely makes for interesting character interactions). Wild and weird, these guys are often sources of unexpected advice. They are also often Lovable Headcases. Y’know, the ones who make you say” You’re nuts” and keep them around anyway. She’s adorkable to an extreme measure. She stays, as long as she’s lively. When this Type gets depressed, EVERYONE feels it.

Thomas is obviously the Heroic Leader, one who JUSTLY wields the respect he’s been gifted with. Good decisions are a plus. Many pluses.

Carol is the Boobs.
Duh.
While being beautiful is a requirement for this, intelligence is not. Madame Graves is blessed with both. Boobs can be outgoing with their emotions, or reserved. Both can be played out well, if done right.

Nina is the Sunshine. Radiant beauty and Radiant Smiles are often associated with these. Also, swift to leap to the *GLOMP* stage of friendships.

John is the Master of Aloof. Not exactly open about what he wants, but you can rest assured he wants something. Generally, this Type is smooth like butter, but can be surprised when they receive LEGIT results. Girls are a game, and he plays them like a piano. He isn’t a dick about it though(some are, and some aren’t).

Mike is the Outranked Official Leader. HE is the one in charge, but looks to subordinates for help on a regular basis. He’s generally lacks self-confidence( with a type like this, the faith in oneself can differ from each character) and seems lost and helpless with out anybody to. . . hold his hand, essentially. He’s even got the Boobs training him . . . smooth play, bro.

Jess is the Sexy Sibling. This Type can either float around the cast or show up randomly, only to disappear soon after. This one is often superior over their other sibling(s) and is about as varied as the colors of jelly beans. Each one is unique, from he art style presented to the interactions this Type has with those close to them.

I have YET to see a Goth, Stonelike Stoic, Lustyf or a Completely Competent Type show up here. Time will tell, however dubious that goal may be.

I think that your description of sitcom webcomics contains an explanation of why it is not generally used. It is a perfectly accurate description of a webcomic, but it tells you virtually nothing about it. As you said, five random examples that fit into that category are almost completely different other than that. Things like “workplace comic” obviously don’t tell you enough about it, but it gives some idea of, for example, what situations might come up and what kinds of sources of humor there might be. These types of generalizations aren’t universally accurate, and don’t tell you enough to decide whether or not to read something, they can help you decide whether or not to try it.

For those of you who couldn’t bother to read that, saying it’s a sitcom webcomic is a more accurate description than a workplace webcomic, but it tells you so little that it’s useless.

as much as ai hate him, she had it comin after all the things she said about him earlier.