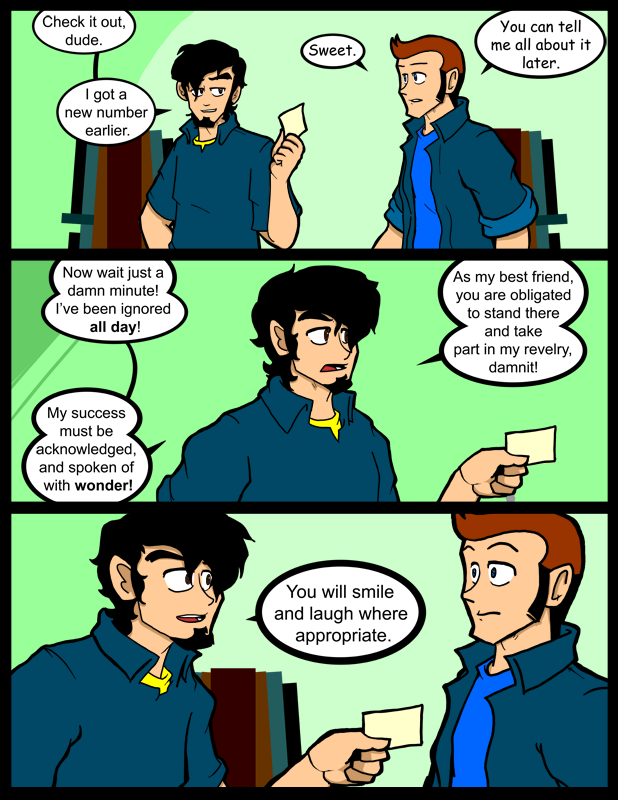 This is the first post I’ve done since I got Athena working again.  It’s been touch and go.  I was afraid that I lost the last three pages, but I double archived them.  I had to reformat them, which took a long time, but not as long as making them again.

I appreciated the detailed responses about various ways to address my technical problems.

In the end I had to restore Athena to its factory settings.  Three or so years of hard use and random issues had built up to the point that even simple tasks were becoming nearly impossible.  It couldn’t recognize hardware, read most CDs, and many other little problems.  For someone who uses a computer as much as I do, clearing away all that crap is like having your brain streamlined.  It’ll take some time to restore everything, but ultimately things should get easier.

Glad things are back to running properly man. BTW Johns face in the last panel is terrifying.

I kind of thought when he said “I’ve been ignored all day” he would sneak a peak at the audience (aka, the writer) for a little extra comic effect.

I guess that’s been done too much though…

Y’know that’s true. John got shafted in this arc so far.

Yay, more John! I’d have to say he’s the eye-candiest guy currently in the cast! XD

I have finished your archive and caught up on your comic. I have to say the story is very good and brings back memories of my 16 years in retail. Good for you for getting out, it is a killer for most people, though some seem to thrive on it (and they are usually the Reggies of the world). Thanks for a quality comic.

I thought he was Ed’s best friend? Or are they just friends?…

J.T. – Well, he’s known him much longer. How exactly Ed knows Thomas has never been revealed.