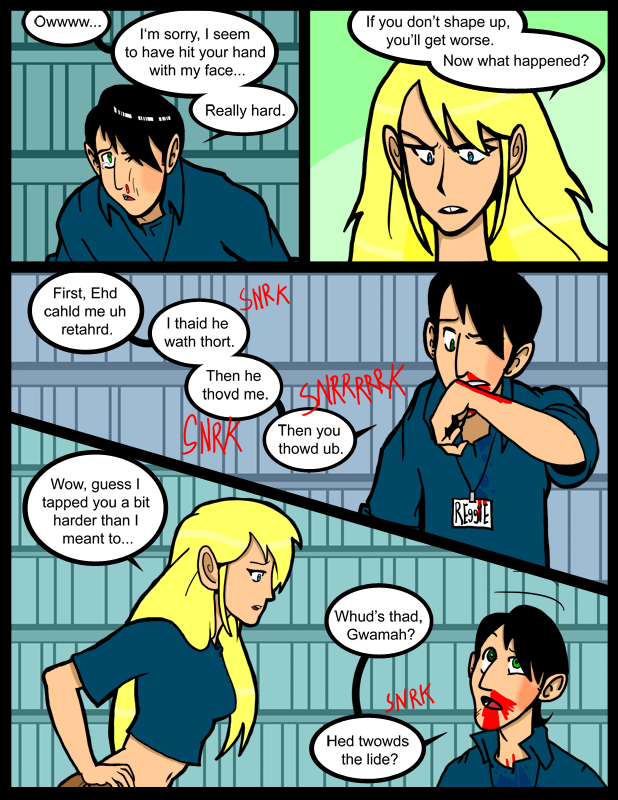 I got some Wii points for Christmas so I downloaded the first 3 Strong Bad’s Cool Game For Attractive People chapters.  Well, actually I tried the first one, enjoyed it, then got the next two based on the strengthof the first.  I had 1000 points left after that, but I decided to get two NES games with it rather than the 4th part of SBCGFAT.  Sort of a quantity over quality decision.  Megaman 2, and Punch Out (Featuring Mr. Not Mike Tyson), were the winners.  I have working NES copies of those games, but it’s a bitch getting out the NES to play a couple of games for thirty minutes.  It’s a shame there isn’t a way to get my entire archive onto the Wii.  That would be sweet, and I wouldn’t have to buy all those games again.

you should try fce ultra gx for size. it requires a bit of hackery, but you can play your nes games with it. so no spending points, and the like.

what exactly is he saying in the last frame?

I believe he’s saying, “What’s that, Grandma? Head toward the light?”
Also, does he have hemophilia? I don’t think anyone’s nose bleeds that much normally…

D:
Is REggiE a retar…er pc time… special?
ED would have bloody killed him

oh translation
“Whud’s thad, gwamah?
“what’s that, granma?”
“Hed twowds the lide?”
“Head towards the slide?” this is more of a guess as he seams to just be gibbering

it’s head towards the light

“Head towards the light”

Am I the only one who feels some sympathy for Reggie? He’s gotten a lot of shit, and dished out comparatively little. He isn’t a particularly nice guy, but neither is half the cast.

Only difference is Reggie won’t stop until you want to pound him so that he resembles the A1-smothered steak I am currently gorging myself upon.

“Hed twowds the lide?”
“Head towards the light?”

Are you reading the same comic the rest of us are reading? Reggie’s dished out plenty, and hasn’t gotten near what he deserves.

I too had a moment of softness for the Regmeister. Poor lil’ guy. He gets a nosebleed on himself AND he seems to have bitten his tongue clean off.

Now he has to go home to wash up.
Probably gets everybody infected with his blood.
Then ends up committing suicide because he got rejected by his crush.

He just wants to belong! Oh the humanity!!!

Wow, I actually feel sorry for the jackass now.

Not sorry for the sucker in the slightest. Payback’s a bitch and earned in this case. Besides, what makes anyone think that a slap from Nina the amazon would be something that can be shrugged off easily?

I am torn whether to feel sorry for him, he got hurt pretty bad ( for a slap), but he was asking for it, he really was hoping that Ed would hit him and get Ed fire. Just so he think he keep his job, that just lame.

So…. I started working at Best Buy recently, and no I totally identify with your story. This one guy, Mike, is EXACTLY like Reggie. Like seriously. Except that he’s totally hot, and has the most amazing ass. It’s really quite a shame, because he is such a fucking jackass. So..yeah. Anyway, just thought I would let you know, since I haven’t been on in a while. Oh, and Best Buy is my first real job. Before this, I was a math and science tutor.

he left out the part about brooksie…

Is it just me or has Nina been cutting a half inch off the bottom of her shirt for the past like four strips.

HOW CAN SHE SLAP!
anyways, damn she is strong. I almost feel bad for him, ALMOST.

There are very few web-comics out there which get my attention and hold it captive, but I am glad to say that this is one of them.

Keep up the good work, my friend!

Also, I am convinced that Reggie got the pill for what ails him in this comic.
I’ve known several guys like him, and the best cure for their jackassery is either public humiliation or more drastic, more effective methods such as those seen here.

Judging on where Nina hit him and where blood is coming out, he actually damn near got clocked. I almost do feel sorry for him, if I had not inherited a silly last name and also shortness.

I LOL’d so hard I almost peed my pants. He’s either faking how badly he’s been conked, or he’s a total wuss. Since I’m pretty sure he can’t make his nose bleed at will, I’m going with the wuss angle.

GO AMAZON POWER!
I love how he left out the part were he totally made fun of poor little brooksie, He deserves the pain!

Are you guys *sure* that Nina isn’t going to get in trouble? She apparently whacked him pretty hard; she probably fell into the “excessive force” bracket.

C-Ham, I too noticed this. I guess I feel obligated to say that there’s nothing wrong with shirts getting shorter. In fact, I think the unspoken goal is to turn this into an “adult” comic by page 500.

We already have it all… midgets, big boobs, amazons… and FINALLY we get introduced to a little S&M. I smell money shot!!

Huzzaj: I think its how he can justify the big stuff. I go back and reread and he’s whiny, or has unrealistic expectations he takes out on others, but when it comes to taunting Ed…

Aww,,, This page actually makes me feel sorry for Reggie… Too bad he’ll ruin that soon.

LOL! Sometimes we giants don’t realize our own strength. I always had to watch how hard I tapped people (when I wasn’t trying to hurt them, lol). And Nina totally isn’t going to get into trouble for this. Reggie’d probably swear up and down he ran into a shelf or something.

yeah i agree a guy like reggie isn’t going to admit a girlie did so much damage to him. he is indeed overly prideful.

Adding on to what Gabrielle said, I also think he wouldn’t rat on her because he (quite obivously) likes her, as demonstrated by his unsuccessful flirting in past strips, trying to act/look stoic for her, and not getting mad at her for the slap; getting her fired for assault wouldn’t benefit him at all.

Also, is it just me or is that a tear in Reggie’s right eye in the first panel? XD

While you’re here reading the comic and commenting, click the link called “Break Room” and join the forums. Talk to JT and some of the people who know the characters and situations that inspire a lot of the comics. Or just tell us our tastes in other comics suck, *grin* whatever floats your boat. Occasionally the real life conversations spill onto the forums as we go our about our lives, and now you too can put in your two cents and tell JT what you think about a particular subject.

Remember, just click the link called “Break Room” and join the few, the arrogant, the forumites!

I’m siding with Olick on this one. Reggie didn’t deserve to be hit. It’s a tough world you got to learn to have thick skin. When I was going to high school, playing the dozens with my friends and enemies was our way of life. You got to learn to fight with your words instead of your fist. That’ll make you look better and keep you out of trouble. Also is Reggie a Hemophiliac (a Person whose blood does not clot and bleeds uncontrollably)? That’s a whole lot of blood to be coming out of his nose…

Having a thick skin is only about accepting criticism, not harassment.

I’m also the Grim above this comment, didn’t know someone already took the Pseudonym “Grim”. Also If Edward can’t take Reggie’s jokes, he has no business working in retail. You meet a lot of assholes in retail, A LOT of assholes. I work at Stop and Shop and I used to Work for GameStop so I know.

You’ve got red on you.

Nina slaps pretty hard (or else Reggie’s physical structural integrity doesn’t match his mental), but it is good to know Reggie still has his wits about him despite being bleedy all over the place.

You are just stewing in excuses to hate on a dude who was doing well.
Sour grapes?

could be all of the above…

I’ll get the mop…

GOD, Reggie is so bad. Nina just ‘tapped’ him and he’s out cold. Imagine what Ed woulda done…

As Soldier would say: Take your lumps like a man, Private Twinkletoes.

have he got a glass nose or something to be bleeding so badly.

Geez, can’t even take a slap like the bitch he is. Totally useless human being.

im losing it. that was hilarious. omg im dying.

She should have given him a good hard kick in the balls. He wouldn’t be cracking any jokes THEN.