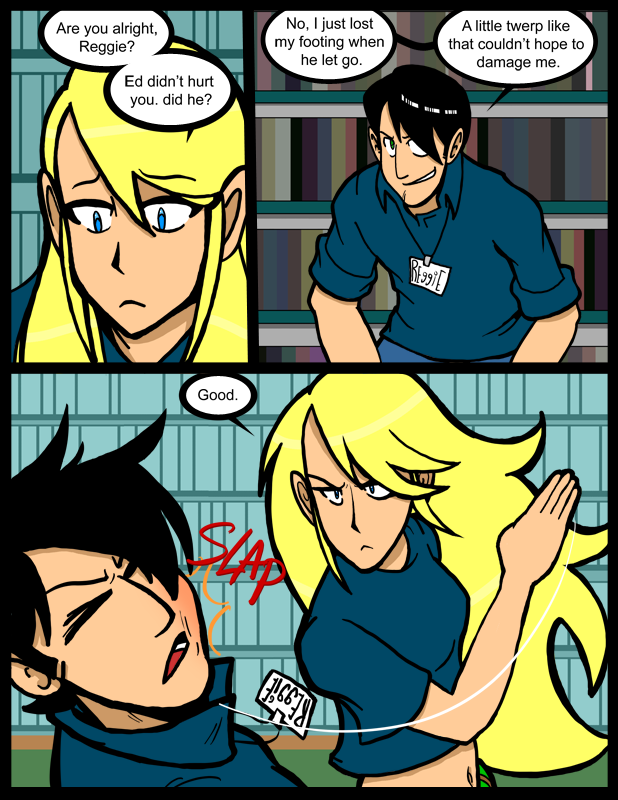 I had this dream where I was being pursued by witches.  They weren’t Salem style granola witches, or Wizard Of Oz witches, but serious Wallstreet style witches.  Like, if you got between them and their goal they would magic the shit out of you…  by removing your organs with magic.

Anyway, I don’t know why they hated me, but I ended up at this safehouse where they couldn’t detect me easily.  So it was kind of Diary Of Anne Frank except the Nazis were witches, and I wasn’t a young girl.  The safehouse had a neat magic trunk that you could open different ways.  Depending on how you opened it the contents would be different.  There were lots of interesting things to do, and when the witches finally found me I escaped again by using the box to warp to another location.  I assume it acted like a doorway, but for all I know I might have been in a world contained within the box.  I woke up before I had a chance to find out.

She should have punched him.

Oh yes! That’s waht we’re talking about.
That was a fine bitchslap, Nina. =)

oh SLAM! that was awesome.

Now the backhand to balance the other side of his big stupid face.

Whoa, I had a dream last night that someone was screwing around with my magic trunk!

Okay not really. I dreamed I ordered a pizza and they sent the wrong toppings. Pretty boring dream, really.

Don’t you hate it when you wake up before you get to find something out in a dream?

I just hope she doesn’t get in trouble for this.

I hear oreos help you remember your dreams. I hope that’s true. I hope I could one day have just as vivid dreams as you do, JT.

I honestly don’t think she’ll get in trouble. She IS displayed in the picture at the top of the site.

I’m hopelessly in love with all the girls in this comic now. That is all.

HAHAA! Excactly what I was waiting for! Justice has won.

Yeah and even if you can go back to sleep then, you never get to go back to that dream.
bummer.
Reggie, now what’s you gonna do? Complain that mean old blonde girl is pickin’ on you. right, like anyone else would do anything but applaud. Take a swing at her and Ed will be all over you and with all the justification even Mike could require.

ouch. I felt that.

As satistfying as it is for Reggie to get his due… it won’t change anything… he will still be a prick… and he may even go as far as to not report his assault just so that he can hold it over Nina’s head.

So again was it really worth it…

i can wait to see what happens next

Favorite page evarrrrr!!!1! Like the one I added there? It needed to be done. ^^ No, but seriously, bitch slap that bastard!!!

Nina would break her thumb if she slapped Reggie like that. I wonder if that qualifies as a no-prize?

The slap means she likes him really.

Love the comic though

shouda kneed him in the nuts the cunt

I believe hat there is a box much like that in the fourth Harry Potter book.
Dunno really why that comes immediately to mind. >.<
Also: Way to go Nina!

You know… It would have been a good thing if Ed got fired.

Then he could get things going with Nina and Jo without worrying about losing his job over it.

Then Reggie would have lost the ultimate battle.

I’m so late to this party but uh

why would you keep Reggie if he’s so incompetent and arrogant? It doesn’t work, and it doesn’t make any sense. He would be fired for the whole ‘massive inconsiderate dick’ thing faster than you can believe. Now if Reggie was CRAZY competent, then it would make sense to keep him on the team. But as you’ve written him, he shouldn’t be there.

Even if I do hate Ed and like Reggie better than him.

I can’t remember in what order his backstory is revealed anymore… Just stick with it. It makes sense over time.

Reggie’s getting off lightly, I suspect.

“My own hit never fathered me!”

that is what one calls a bitch slap, it is a slap, meant specifically, for a bitch.