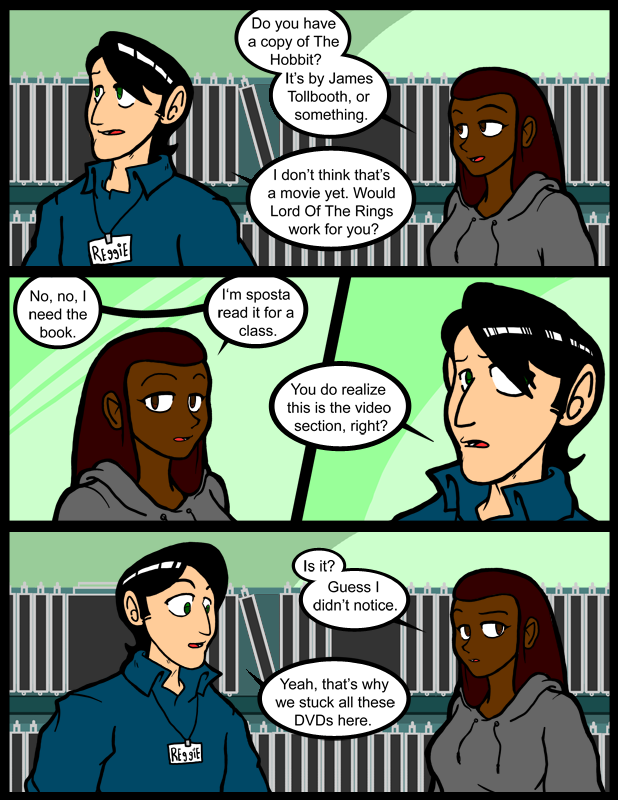 I had a strange dream the other night.  I was walking around, at a school I think, and ran into George Lucas and Steven Speilberg.  It was exciting and I did all the things that you do when you meet people like that, then I went along my way.  Later in the dream I met them again, at a restaurant, they were ahead of me in line.  After that I met them again someplace else.  I kept bumping into them over and over and each time it was more awkward, and less interesting, than the last.  Eventually I was like “I hope I don’t run into those guys again, I’ve got nothing to say to them…”

The only celebrity dream I ever had was having burgers with “Weird Al” Yankovic. Which is odd, since he’s either a vegetarian or vegan, I forget which.

That girl was cute until she got all spacey. Maybe she’s dumb enough to think Reggie’s a cool guy?

Crave: She’d have to be pretty slow…

I know this is late, but Al is vegan, and has been since long before it was possible to do that without knowing how to cook in most parts of the US.

That said, there are dozens of varieties of vegan burgers. At the time of the comment I’m responding to, there were something like three different vegan burgers I ate regularly because I thought they tasted better than meat, even though I was not even vegetarian at that time. I did, admittedly, have them with cheese, because I didn’t have the presence of mind to try them without for another couple of years.

But what about the Hobbit cartoon movie? Or are we just on Reggie’s limited knowledge?

Crave: Reggie’s knowledge of anything not Reggie related is questionable. She’s lucky he knows about LOTR. Everybody knows that the Hobbit cartoon is sweetacular, right?

Me and Reggie now have something in common. An utter distaste for dumb people, and the need to make a smart ass comment every time they speak.

Wow, two comics inn and he hasn’t made a total asshole of himself yet. Is that like a personal best for Reggie?

Haha, I like this girl. She’s weird… but in a cool way. Also, go Reggie!

I don’t remember is I’ve had any celebrity dreams, but last night I dreamt that my best friend was pregnant and there was this girl who didn’t have any short term memory so she kept forgetting things, but little things, and she had this charm to keep demons away which was made out of rope and a gumnut, and then her father was there and we had to sneak into a bowling alley.

wow it may possible that I would root for Reggie if that customer is that dumb and annoying.

That’s funny. I’ve actually met Steven Spielberg, I was supposed to be a “stunt double” for the kid in The Shining, but when I got to the studio in Denver, my hair was too short. So they let me and my dad hang around the studio. This was for the TV Series thing, I had to look up what I had been but I actually met a few actors and Steven.

Don’t remember much though, I was about…uh 11 maybe?

Hee hee hee… What a strange dream.
I dreampt that I went to a Yankee Candle in some other city and was showing around Steve Irwin, though not the Steve Irwin that’s dead, and we smelled a meat candle which, for some reason, had a snowman on it. I guess they didn’t want a picture of meat on it. Anyhoo, then my boyfriend Spike showed up and had problems with their damned east facing windows so I had to take him downstairs where he wouldn’t get hurt by sunlight and I got gravel on my skirt. I went back up and they announced that Steve was going to be giving a speech and that he’d brought an entourage with him. Someone commented that “they only brought along food Spike wouldn’t touch”. “So you know about the vampire thing, then?” “Of course.” Then I got a creepy feeling and started casually trying to make sure I still had my stake… It was about to get bad and I could tell. Something about these asshole Yankee Candle employees was not right and I was beginning to wonder if Spike was alright.
Then I woke up.
God, I love Spike.

Hey did you notice this is the first dumb girl we’ve seen in this comic?

The cartoon Hobbit IS “sweetacular”.

She kinda deserves the sarcasm

What has it got in its headses, precious? …

I dreamt that I was in a Hollywood picture… and that I was the star of that picture
It really blew my mind, the fact that me, a long-haired… well you get the picture

Wait… what kind of school issues the Hobbit as reading material? Frak… all we got was stuff like Moonfleet, the Crysalids (hated the explanation of telepathy in this) and the Stone Angel. Bet they gots awesome teachers like Robin Williams and Jack Black there as well at that school.
Tuppin’ liberty!

James Tollbooth?! What the crap, girl?

Okay Considering on how much Reggie is supposed to be a dick I can’t help but feel a little dissapointed in his reaction. There is so much more assholery he could’ve partaken in.

Dude is employed to help the store make money, y’know.

I am twitching with wrath over here. The only question between is batt’leth, sledgehammer, katana, cutlass, etc…

It’s amusing to read this today, when there are actually three Hobbit movies.

At the time I wrote this Jackson had stated that he wouldn’t be making any hobbit films so I thougt this would be a safe scene to write.