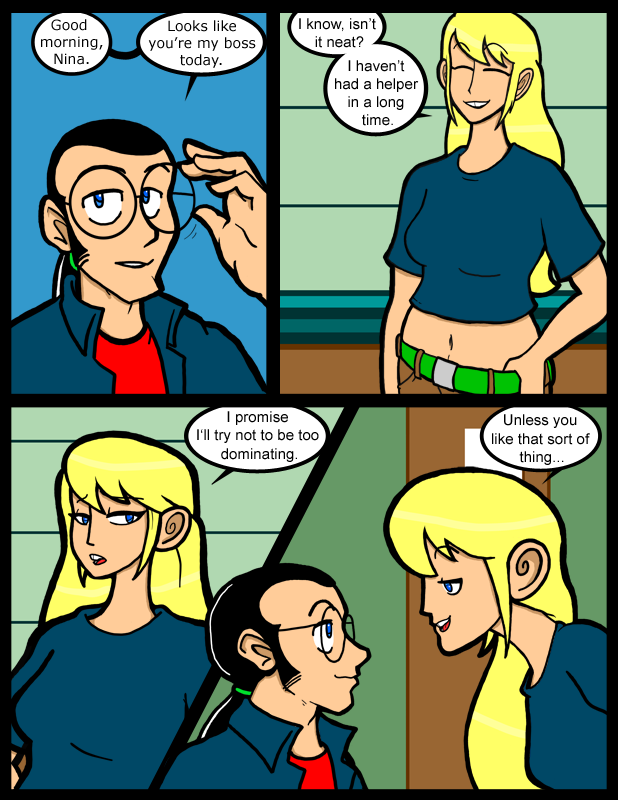 Does anyone who reads BF happen to use Manga Studio? I’ve been thinking of trying it, but want to know a bit more about it before I commit. I could get a game and a half for that kind of money, or maybe some Transformers Animated guys… If there were any out here.

I finished The World Ends With You, but haven’t gotten the “special ending”. I went ahead and got Final fantasy Tactics Advance 2, and it hasn’t caused any production problems, even though I am a bit obssesed with it. I’ve done a fair ammount of racing online in Mario Kart Wii. The highest point rank I ever got was 8500 and some change. I decided to screw around at that point because maxing out the points would make me feel like an ultra loser. I’m just fine with regular loser status, who isn’t concerned with being the best at Mario kart.

Re: Manga Studio — the artist on Octopus Pie (www.octopuspie.com) uses it (until recently — now she scans in her pencils) and has posted on YouTube, showing her strip in progress.

Here’s a link to the YouTube I mentioned: http://www.youtube.com/watch?v=KeKWsf1UzEg

I have a copy of it, but I have yet to try it out my self. I’m still trying to learn my way around illustrator, opencanvas, and photoshop.

Octopus salad is pretty good too.

I lost five months of my life due to the first Final Fantasy Tatics.

“tie me to the bed post, beat me ’til I am senseless…”

For some reason, when I saw BF, I thought “Before Fractions? OH! Between Failures.”

I noticed something interesting here.

I have manga Studio. I like it, but you have to scan things into Photoshop then port them over to manga studio. Takes a bit of time to get used to doing things in an ass-backward way. I would say download a free trial or something before you waste money on it. I really do like it and it’s great for word balloons– oh god, how it’s great… For drawing in it’s kind of fun, too, but it’s hard to get used to and I think you’re doing fine with Photoshop. ^^ I wouldn’t bother about it unless you just want to try it.

I have Manga Studio as well, but I think manekochan summed it up

I believe there is a law of some sort stipulating that you must be strapped DOWN thoroughly in order to ride the roller coaster.

Or the tea cups.

Laws more scientific, not to mention past experience, merely stipulate that you must fall flat on your face, several times, while trying to enjoy the bouncy castle.

Nina is so happily cute. I love it.

They have such good chemistry! ^_^

I too use Manga Studio. For me, it works especially well, since my comic is screentoned. A LOT. And the word balloon feature is nice, I just have to figure out how to do overlapping balloons. But mostly, I like it because it’s NOT Adobe Imageready. Incidentally, you can load pics directly from the printer.

I like the tall girl she makes me smile.