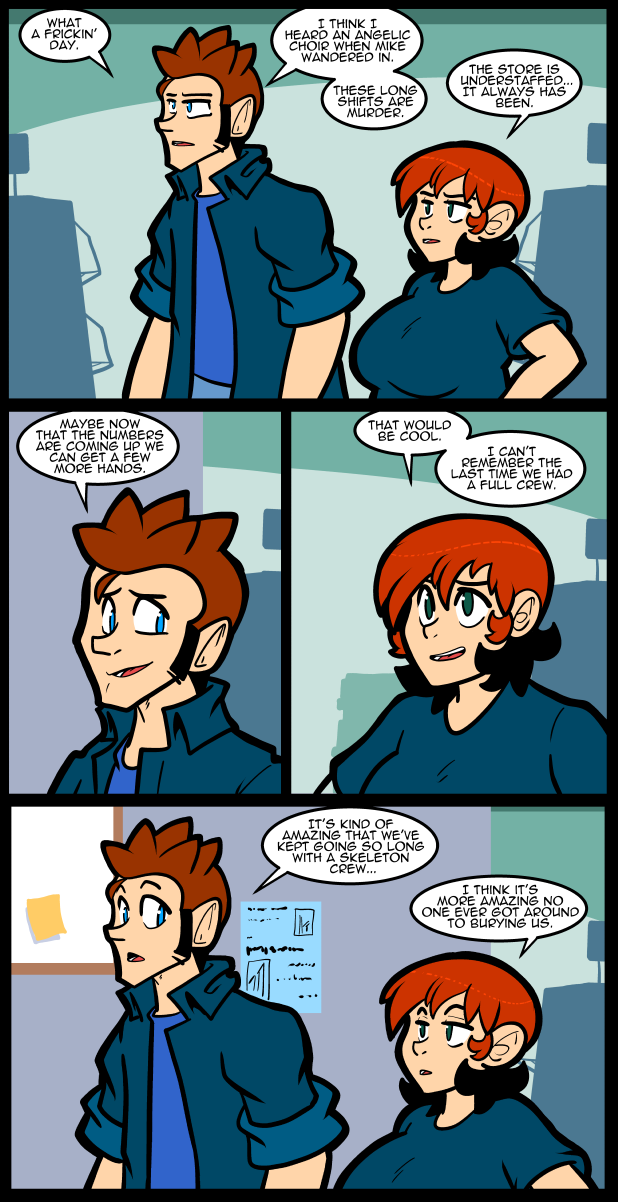 Many years ago someone started a Top Web Comics account for Between Failures, but it wasn’t me. I found it at some point and was like “Fine, one less thing for me to do”. The link came here so it was all good. Whoever started it abandoned it in 2012. I couldn’t get control of the account after that for various reasons, but the other day on twitter I mentioned it to their account & they worked with me to give me control of the account. Point being that I can change the incentive image. Honestly I don’t know if using their service actually gains me new readers, but I know at least 500 of you vote for me regularly. I think it would be interesting to see how high we could go. The image I loaded is very large & from the Patreon. You should be able to manipulate it in whatever way suits you to make it into a wallpaper, or whatever. I’ll change it every so often. Anyway, the link above named “comic vote” is the one in question.

“maybe now that the numbers are coming up we can get a few more hands”
Thomas, my poor naive boy, you’re being way too optimistic about how corporate considers their stores XD

Right? I’d be less surprised if they suddenly cut wage hours to the store to try to spike the profit more….

I can tell you that years ago top webcomics is how I found you.

“Numbers are going up; they obviously have it handled and don’t need more help. We might even be able to cut someone.”

This. This is how they actually work.

I know my workplace is not retail, but as far as L2′s (upper management) goes, it doesn’t matter. Nowadays, they can hire Directors without experience to run places. Technically, middle management is considered interchangeable regardless of their expertise. So what happens is that they assume a call center, a book store and an IT help desk all work the same way. The current trend is “eliminate one position, monitor the metrics for performance, and if they do well, eliminate another one. Repeat until the metrics start to go down, and then stop.” So they do it EVERYWHERE in EVERY CORPORATION.

And then when they start to lose headcount from people leaving and complaining, they throw the workers a small bone in terms of a raise or something. They don’t want to add any extra positions until they absolutely have to – they’ll stick to the number of employees in a revolving door scenario until it is unsustainable.

However, by the time the business realizes it is unsustainable, the Director or whoever is in charge is already on to the next job. Directors usually move around every two years or so, disrupting workplaces to make a buck and then moving on for more money elsewhere. Then it’s hell to hire anyone, because their reputation for retention is terrible.

I’m a Director myself (although I am not one of those I mentioned) and I see memos and such going around from other Directors and L2s talking about how we need to look for ways to keep employee count low while keeping profits rolling in. They quote this new fangled business style emphasized in new books written by the new school of business that I have tried reading and they are full of BS. None of the new business styles understand how business and customer service and retaining people work. Google advises you to 1. make the workplace more fun to work at but 2. only hire the minimum amount of people to generate the necessary work required. A Google VP has an article at a website I pay to read called “Skimming the PTO Pool” talking about how you give nice paid time-off benefits but you then fill their schedules up to the point that you talk them out of taking any, often pretending to “forget” they made any requests (or just “forget” about time lost at the end of the year so the employees never question how much time doesn’t get carried over).

That sort of base plan can work at Google, where people like their jobs and make enough money to have a few luxuries. Trying to translate it to a minimum wage retail job, and your going to lose the business.
And while it -can- work at a large company with a good reputation, that doesn’t mean it’s the best policy.

A couple of days ago, Robin Williams’ Pop-Eye was mentioned by Jackie.

The only complaint I ever had with it is that it was slow for much of it. Everything else is brilliant.

I came to the conclusion, based on the panoramic shots of the set, that it was designed, built, and scripted as a stage production. If one could see the whole set at one time, you could (and were supposed to) see little “village life in the world of Pop-Eye” skits playing out during the slow parts of the main action.

Everything shot on the water is a great little bow that ties up the rest of the package.

I also think the guy they found to play opposite of Pop-Eye was a fantastic pick that could have stolen the show if he wanted to. (Not talking about Bluto. Go watch it!) I don’t know why I never looked him up, but he had great chemistry with Robin.

Saw it only once, when it was released. I remember it as ambitious but more WTF than successful. Williams kind of laughed it off.

Gotta say, though: Shelley Duvall as Olive Oyl. I mean, who else? The woman has not lived who’d be a better fit. :)

Olive Oyl is the ONLY role Shelley Duvall was born to play.

I mean, Yikes. She *destroyed* The Shining with her snivelling delivery.

Popeye is a very fun movie, and if you’re talking about Ray Walston, the man who played Pappy, then I agree. That movie was very well cast and I think it’s about time I watch it again…it’s been years. :)

Oh, is that why the voting incentive changed recently? Good luck!

That first panel facial expression though.

Glad you got control of the account. Not so much because of being tired of the incentive but because you style and skill have moved on. I like incentives but I vote because I like the comic.

Thanks, man. Wow! That is huge! It’s nice, but you know I’m looking forward to some Alex and Carol content. Keep up the good work!

It’s fine for me.

Yay, new Top Webcomics image! I’ve been wondering when that would change for years. Guess now I know why.

‘Productivity experts’ [1] are morons and sycophants.
I suspect they whole ‘fire half your crew’ idea comes from factory production numbers[2]. Second shift almost always gets more done than first shift in a factory setting. Not sure why exactly, but the productivity “experts” sure as Hell don’t know[3].

[1] or whatever they call themselves
[2]and 1st has the audacity to call 2nd lazy even though though 2nd is doing half or more of 1st’s work on top of their own
[3]it’s probably that there’s not as much management present and trying to look busy by walking around and giving terrible advice on procedures they’ve never done and know little to nothing about.