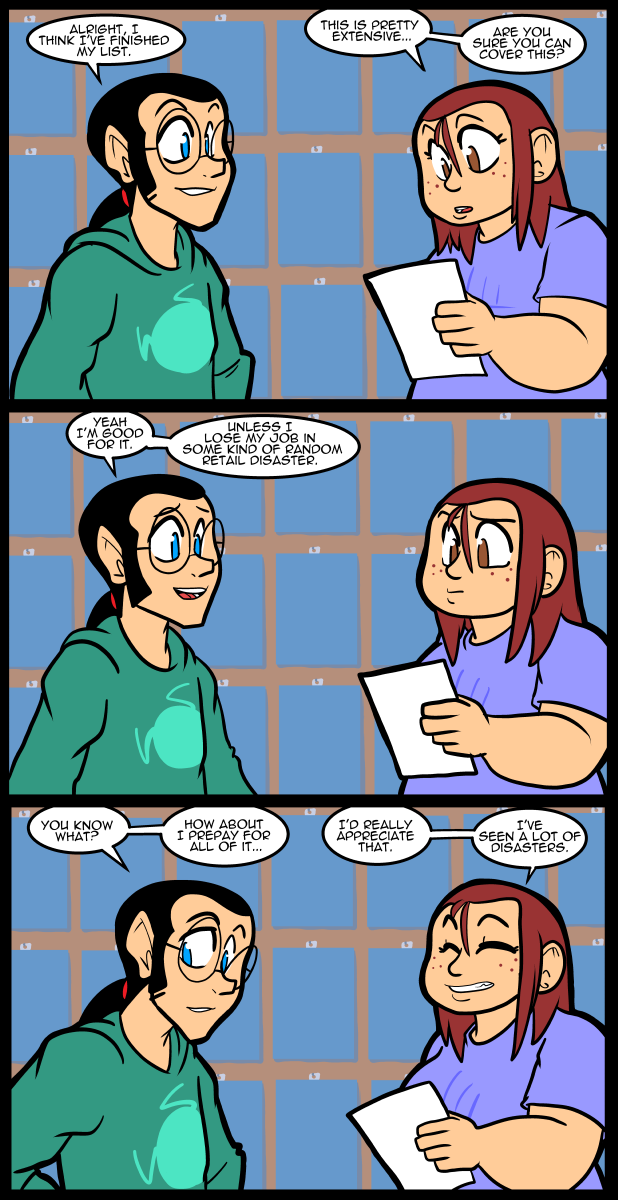 Back when I still frequented comic shops prepaying for a pull list wasn’t a common practice. I looked around and it seems to be the norm now, but at least a few places don’t require it, but I don’t know how they get away with it. They didn’t use to credit you for overbuying comics, but maybe they do now? I’m not sure. In any case I watched not prepaying for pull lists take down three comic shops. Almost 4, but one managed to pull out of the nosedive… Although they diversified into other products and aren’t really a comic shop anymore. Several people would start massive pull lists and then just disappear. From their point of view I can see how embarrassing it would be to have to come in and tell someone you can’t pay for the $300 dollars of stuff you preordered, but it’s still a dick move. At the same time it was incredibly difficult to get people to come back for books month after month and the pay on arrival pull list roped a few people in for the long term. Unfortunately that system fails over time more often than not.
I expect that not a lot has changed for the independent comic shop over the last decade. Most companies don’t make deals with little shops about returns & what have you. Places like Wal Mart carry some multi packs of comics, but it’s virtually impossible to start getting a run of books with the haphazard system they have of using contracted vendors.
When I was little Marvel had a subscription service, but I don’t know if they still do. I eventually stopped using it because every time I bought (well, my parents bought…) a subscription for a year they series would fail after 6 0r 8 books then they’d give you some random shit to end the run of the thing. So I got most of the Madballs series, for example, then they didn’t send me the actual last issue printed but three spider man books that weren’t contiguous or even from the same series. This actually happened with EVERY comic book I ever had a subscription to from every company. The Real Ghostbusters, Captain N, Super Mario World, Madballs, all ended before an actual series close, they all didn’t send me the last book. In the case of TR Ghostbusters they sent me every other book at the end and then three random shitty comics when they went bankrupt.
How the fuck have comics survived this long? Looking at it now this system of sales if fucking ridiculous…

Best to avoid getting into debt, my mother used to have to pay hundreds of dollars a month just in credit card debt for over a decade until she went bankrupt.

Hope your mom made it out okay in the end.

We’ve all had that happen. Order something big then loose our job. For me it was the Japanese subtitled samurai pizza cats DVD.

That whole series was a huge ball of fun.

The American version actually made up its own script. The Japanese had a completely different script. Check it out sometime. Very enjoyable so basically you get 2 shows.

Out of curiosity – how much is he planning to spend?

Then there’s the rogue alot in the third panel.

Speaking as a comic/game store employee, we don’t require prepayed sub lists, but oh yeah does it hurt when people vanish. It sucks, but the prepay system just seems like a pain in the ass. Thankfully we’re diverse enough that a couple hits to comics doesn’t kill us though comics are definitely in our top sales by department.

I will say that speaking of comics surviving, hell if I know. I guess that’s why DC is trying out the twice a month titles and marvel is releasing more and more titles at the 4$ price point. I think that’s why they tried the diversity push too, just trying to reach new audiences. Kinda sad they made a mixed bag quality wise with those at the end of the day, but that’s normal for new comic runs at the end of the day. Just seems like for this particular one they needed to hit a few more out of the park (Ms. Marvel and the girl Thor were great, most everything else was eh). But that’s just my opinion there. God knows I can never tell what comic editors are doing. lol X_x

I really miss my 16 page a week comics. I stopped buying after the First DC/Marvel universe reboots. . .i’m old. . .

How have comics survived? Licensing and movies. It’s my understanding that Marvel and DC could stop printing comics entirely and still make money.

I’m still amazed comics survived torrenting. When it comes down to paying several hundred dollars for a novel that doesn’t end or firing up your VPN and plugging in a few commands to digitally borrow someone else’s copy for infinity, you’d think more comics fans would go that route.

But “borrowing for infinity” is another term for “stealing.”

However, borrowing just long enough to read it and then “giving it back” (i.e. deleting) is less like theft and more like a library.

Ah someone else who drank the koolaid and likes it.

This is why modern artists go self publishing and maintain control of their works and answer to their fans instead of a corporation that would make a Ferenghi annoyed.

If it was “stealing” then someone would no longer have something when someone else took it.

Oh and copyright is an artificial construct by government mandate and supported through graft and corruption.
Did those thieves who picked everyone’s pockets over happy birthday pay any of their ill gotten gains back? Did any go to prison? Go bankrupt?

[A long, economic and legal rant is ahead. Unless you have patience for that kind of thing, please skip ahead.]

As a content creator, as well as part-time pirate, I have the ability to see both sides of the argument.

We have different definitions of theft. If you take something that belongs to someone else without their permission, you’re stealing. My favorite defense for online sharing ends with the statement “…it makes a copy. It’s as if someone stole your car and it was still there in the morning.” They don’t seem to realize that they’re admitting to stealing!

Content creators (movies, books, software, etc.) are making these things in order to make money; to put food on their table and a roof over their heads. The fact that some of them are making jealousy-inducing amounts of it is immaterial. If “the public” didn’t want it, they wouldn’t buy it. Consuming their product without paying for it is “stealing” in this sense. Any concept of “fair share” is, again, immaterial. In an open economy like ours, the idea is more like “what the market will bear.”

You are correct in that copyright is an artificial construct mandated by governments who want to protect innovation, and free thought. Before copyright, there were, like, two people in history who made a living with their writing. James Watt, inventor of the steam engine, died virtually penniless because his invention (which made the Industrial Revolution happen) wasn’t protected by copyright. I will admit that the concept of copyright is being abused and overused (the original idea was to protect and “idea” only for the originator’s productive lifespan, about 35 years. If you wanted further protection you had to keep coming up with new ideas, thereby incentivising progress). So, yes, copyright law needs to be overhauled, but not eliminated IMO.

Well, since I have some (frankly third-hand) knowledge of the industry, I might be able to give some hints.

- Over time the market has somewhat shifted toward trade paperbacks. Which often means books with 100+ pages. They often compile 4-6 single issues and feature a somewhat self-contained story. They are cheaper than buying single issues but still make money. AFAIK there are quite a few series where the profits from paperbacks exceed those from single issues. In addition to comic shops trades are also sold in bookstores.

- Digital distribution is a thing in comics as much as everywhere else. Same as in ebooks the biggest player in this market seems to be Amazon. For a time it seemed to be comixology, but then Amazon bought them. Another example is Marvel Unlimited, which could be described as Netflix for Marvel back-issues.

- Looking at the supposed #3 in the world of American comic publishers, namely Image comics I see a partly different picture. They pride themselves that creators that work with them retain the ownership of their work. As a result they seem to be able to hire some very talented people. In addition to that they were able to expand their customer-base by offering new original series. Some of them overtly made with women and/or minorities as target audiences in mind. They still have other series which are mostly made for men, including the occasional ridiculously sexy pose, and they are covering plenty of various middle ground too. Despite only publishing creator-owned stuff they do handle licensing for stuff like Movies, TV or video games for some of the titles they publish.

Manga and European comics I know not enough about to comment on, but I hope that gives some insight.

That is my take on it as well -

As Netflix and other content providers have started giving you entire story-lines upfront, comic readers have been following suit. Why collect the entire series over a four month period (12 comics) when you can just buy the final trade a month later and read the whole thing at once? Trade paperbacks fly off the shelves at my FLCS, while they carry maybe five of each comic on the shelf (not counting the people who get pulls). One guy reads Dr Strange. He only buys the Dr Strange trade paperbacks. I guess that’s how most people do it now.

As far as online comic “lending/borrowing” -

There have been like groups of people who have attempted to do this over time on nearly thirty sites I frequent. Unlike music or a movie, comic books come out by the dozens every month. To scan and/or store all that content is incredibly time consuming/expensive. Nearly every group eventually quit after a year or two of trying to do it. Not that it was “unethical” but that it was just impractical. Trust me, if you try to keep everything (mains, indies, sides, one-shots), you’re looking at like a 3 Tb for just the last four years alone.

That, and as one comic book collector who tried it with us said, “You can’t replace/resell comics if you don’t have them in your hands.”

Is that a homestuck hoodie I see? The comic may be over, but the fandom isn’t going to die any time soon, is it?

The other word : Merchandising

Weird. I never did pull lists but I never thought of it as extra the shop would order rather them just pulling together what you wanted out,of stuff they had already ordered anyway.

In smaller markets where there’s not a lot of reliable foot traffic pull lists are ordered in addition to regular stock since there might only be a single copy of something on the wall.