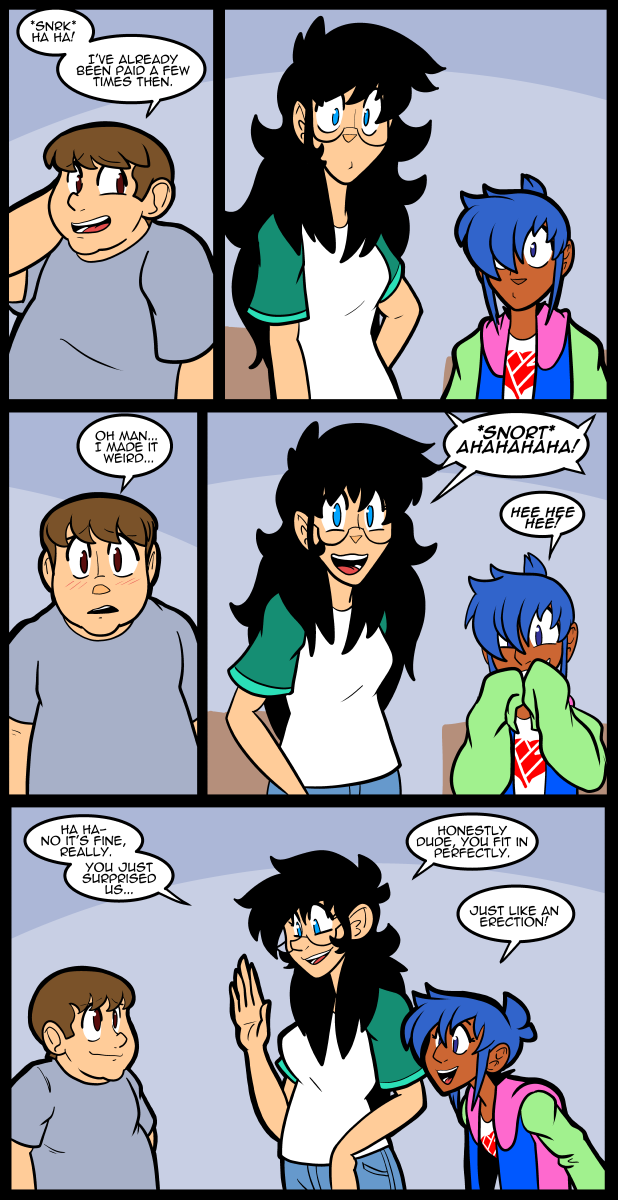 I seriously thought about making that the entire post.

There’s a game called Curse Of The Moon, or something, on Switch. It’s absolutely just Castlevania 3, except made by other people, with a bit of, like, Tumblr aesthetic. I mean, it looks awesome, but I feel like Konami could really be angry about it in court and win. Although they tanked Castlevania so hard I think it’s better that random people just take the idea and run with it.

*snrrk*
I was [totally] absorbed by the story, that I walked right into the comedy stuff, in the last panel!
Bravo, Jackie, Bravo! :)

But ur mom loves dick jokes.

Why? Is her husband named Richard?

To her every dick IS a joke.

On the castlevania bit, its a mini spin off from the new game coming out Bloodstained: Ritual of the Night…was a kickstarter bonus…And as its Koji Igarashi’s own development (and since he pretty much invented castlevania) its gonna be real similar…And after a lot of what Konami has pulled here the last few years…well, they need to be kicked when they’re down if ya ask me…

Igarashi didn’t invent Castlevania, he invented MODERN Castlevania. There’s a difference.
He came to the franchise with Symphony of the Night and reinvented it as a fast-paced action-RPG, though he has a strong affection for the older titles.

Nonetheless, Bloodstained: Curse of the Moon is hardly done by random people(even if Inti Creates has a lot more Megaman in them than they do Belmont).

And given Iga’s prior history with Konami, they’re taking care to make sure that both games stay at Bloodstained: Legally Distinct From Castlevania. I’m pretty sure that’s the only reason the pale guy that wears a cloak and turns into a bat isn’t named Dracula. Konami doesn’t own the name Vlad Tepes, but it’d be starting to push past “suspiciously similar” and into “blatant knockoff”.

Well fuck you Jess, you corrupted my sweet little Jo

She was corrupted long before Jess got there…

She is our darling little sweet-tart lemon-cranberry muffin …… with raisins….. Sultana Raisins …..

Agreed. Jess just helped Jo come out of her shell. :)

Heh, heh!
This isn’t really related, but- one of my dad’s favorite, Latin phrases is: “De gustibus non est disputandum”, which means- There is no accounting for taste.

Actually, it’s *arguing* about taste, not accounting for it.

Pretty much.
Probably, as it is used in American conversations, this phrase is probably used like- [ All tastes are subjective or emotional things], therefore- there is no use in arguing about tastes.

So glad Jo’s mum didn’t overhear her quip in the final panel!

If her mother suddenly showed up that would be the least of her worries.

You a fan of Jacksfilms too? :)

Neat! My comments made it to a couple of YIAY episodes, so you know… If I died today, I would have no regrets :D

I hope you live anyway.

She already IS a one-liner girl. Outside serious conversation she almost entirely quotes movie one-liners. XD

Konami only seems to care about pachinko machines these days.

and so a future 3P was born. Fan wise anyway

And like that, I reach the current page of this webcomic. It has been a joyful ride.

So, normally I don’t comment too much on webcomics like I comment on webstories, I guess simply because a webcomic page is about 10 lines of story/dialogue and there is not to much to say about this. But since I’ve read it all until now in a relatively short time and liked it very much, I’ll give you a critic. I think you deserved it (in a positive way).

The art is okay (I’m not an art critic, who would have guessed). From the early days you changed to a thinker outline and I think it makes seem more… Comic-esque? Child-friendly? I can’t quite put my finger on it. It gives a different feel altogether… Ah, I got a word! It seems more harmonic, that’s it. I prefer it to the thin outlines for that reason although it takes a tiny little bit of the seriousness from the art. On that matter, your transition to color at the exact moment you did was great and very fitting. I missed the comments on that event, as I only started reading comments when the site did take minutes to load, which was some time later (because reading the comment burned away my mobile internet volume), and I will not search for it myself now (limited volume and all that).
I did however caught that comment about you sketching Alex eyes or the whole body of characters when only a part is shown. I know nothing about art, but I find this insightful and clever, independent if this was your own idea or not. I like how you draw the different heights, and know you once explained you like it, too. A few times, either you don’t get the proportions right or I don’t really know how they should look. I noticed that mostly on Evilina (Evrina, whatever) some strips ago (can’t tell you which). If I have to look really hard, I would say the length of Jess’ throat in panel 2 and 4 of this page doesn’t match; even if she open her mouth a little, she would have to move her head a lot more to the viewer for her throat to get that small. Or I can’t see it, I don’t know.

So all in all, I’m satisfied with your art, but there is room for improvement, if you feel like striving for it. I almost feel sad writing this, as I could not draw this good neither this often.

After the part I have now idea about, let’s move to story. I love the story, because it seems so trivial. So life-like. Well, this is a Slice-of-Life comic after all. I have to admit, I WANT to read stories where sex is a thing without being pornographic, and I have not found many stories fitting that criteria. If it’s not porn, usually either the protagonists are to dense, to innocent or to busy to deal with sex. Or the sex scenes are done horribly, horribly wrong. The depths of bad lemon pits are endless. And you don’t want to know the horror I found on a webcomic toplist… But what do we have here? Oh look at the joy, people are just acting like people. Sexuality at work, in the park, even home! Now that seems appropriate.
Of course the story has other benefits besides sex, and a lot of that. Your characters are not 2-dimensional, I vaguely remember you writing that this is important for you and I agree. We get introduced to the story by Ed coming new into the store. Ed, at the time seemingly the main protagonist for me for his Ed-titute (whoops), gets driven to work by Mr. Slack-Off, who, even with his monologue at the start, seemed like an antagonist. Since Ed is new, you as the writer get to introduce everything properly, easy going. In the end, Thomas is ultimatively identified as the main protagonist by the color switch, but I really like how you put the other characters in the spotlight at times. I don’t really feel annoyed when a webcomic focuses on a (side) event for a long time, so I wouldn’t have minded the furry meeting even if I didn’t get to read through it in 24 hours.
I would like to say more about the story, but it is more character development than things happening, but that’s alright, I like it. Although I consider Thomas’ ex coming back to town a major plot twist, and having Thomas together again with Rulette could be very interesting, even if it (supposedly) is mainly Mike’s event. I stay tuned for the Let’s Play, although Jess makes it seem like she is going to be like almost every hot female Twitch streamer ever, and that would kinda ruin it for me (or humanize such females more in my eyes, who knows?)

I cannot recall a plothole yet, although the social graph of the city must look very interesting.

A word about the characters: My fav-ship is Nina/Ed and I wonder why it didn’t bloom sooner, as she seemed to have the hots for Ed from day one, or was she just joking? Nina is probably also my favourite character, closely followed by Jo. Reggie earned my respect, didn’t expect character development from him. And the character I loathe is Wes. He said something along the lines “She is an adult, it is her own fault if she gets abused because she is so oblivious to it, have your fun.” This borders sociopathy. It doesn’t help he has set eyes on Jo, but I think as long as he doesn’t go full rapist she’s safe. I wonder what you will do with Wes, with that stealing rumor, implied police call and fast shared security alone. I hate to admit it, but that probably makes him the most interesting character besides Reggie.

That more or less concludes the critic, and boy does it feel weak. I’m better with written texts. And German. And when the story contains more inconsistencies. Oh well. I just had a feeling that you get, well, not much more than comments in your comment section, as as I’m a writer myself, I know sometimes we hunger for critic. So I guess you are doing well? Hopefully I have done you a favor with this petty excuse for a critic, because sadly there is no way I can support you otherwise (except maybe continued readership).

On a personal note: Reading some of your comments made me feel not being alone with all the burdens that life brings, and I sincerely thank you, because this feeling as well as the joy of reading of the life of some freakin’ humans for once helped me, and will probably continue to do so. I’m picky with my webcomics. I don’t know if direct comparisons will do anything for you, let’s just say out the few slice-of-life which admit sex you are easily in my top three :D

I appreciate your well thought out appraisal of my work. Thank your for taking the time to communicate it and for reading.

Brooksieeeee! Li’l too much at the end there. But I’m snicker-giggling anyway! XD