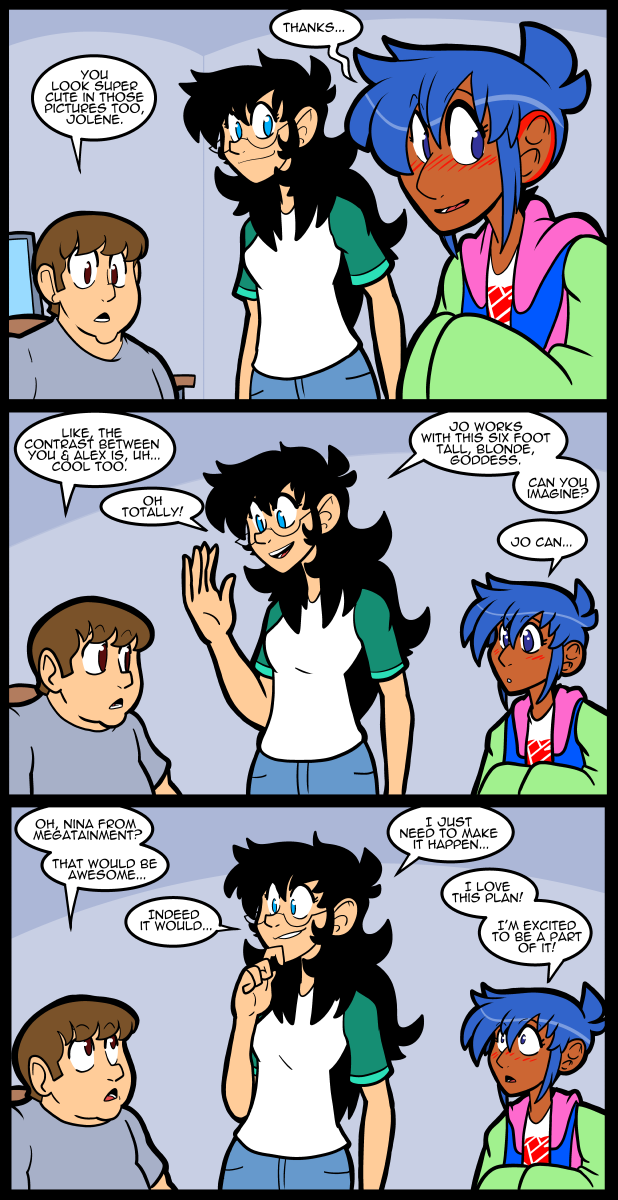 These three are on a dangerously similar wavelength. Also, James knows Nina from the store, but doesn’t know her personally. I imagine it in that was that frumpy dudes learn the names of pretty girls from pestering them at work. How many slights do you suppose it will be before he becomes a men’s rights activist? X3

Also, if any of you remember The Teen from blogs over the last six years or so, she had gall bladder surgery today and is, at present, fine. It was costing her a lot of money to go to the ER over and over so she just bit the bullet & decided to take the hit for the surgery now instead of waiting until her insurance problems are sorted out. The way she described it, it seems like she has the same sorts of problems with anesthesia that my grandmother does, which is that she likes to die while they operate on her. It seems like it scared the doctors pretty bad since removing a gall bladder is apparently a relatively safe operation these days. The Teen’s blood pressure fluctuated wildly and when she came out of anesthesia she had a fit of weeping that she doesn’t remember having.

Anesthesia has odd effects on a lot of my family members. My nephew and his father are violent when they come to. We just found out that this trait passed down to him.

It’s like that scene in Ghostbusters. I like this plan I’m happy to be a part of it.

It’s a direct quote. As a Ghosthead myself, I’m happy to see it.

Yes, seeing Nina as part of the plan would be awesome!

I sense shenanigans about to develop…

Bad Jess your brother is dating her.

He’s fairly handsome too, so just bring him in kicking and screaming.

And then keep the poor bastard’s eyes shielded from the inevitable commentary.

I have the opposite problem with anesthesia and painkillers. I apparently metabolize them much faster than normal folks. I knew that I normally have to take double doses of OTC stuff, but when I had my heart surgery I actually ran them out of drugs.
They had calculated the proper amount of general anesthesia to keep me out for the procedure as well as a local anesthetic. I came to once while they were running the leads down my chest. I heard an “Oops, he’s awake!” and then they hit me again and put me out. I woke up again as they were starting to close and they told me that they couldn’t give me any more general, so they were gonna numb me with a local and finish up real quick.
It was kind of odd not being able to move (they had me wrapped like a burrito to keep me from flailing I guess. Just the face, upper chest, and the arm with the IV free) and feeling them sticking things in my chest and hearing the sizzle as they cauterized things. Thankfully I was still groggy enough that I didn’t care.

I am the exact same way, had to get like 90 someodd stitches when i put a quarter sized hole 3/4 inch deep just above my left eyebrow, they used local roughly 6 times because it kept wearing off.

B. Ooof. My sympathy for The Teen, I wish her a swift recovery.

Well if James was a regular and is one of the few that actually pays attention to those in customer service, then he would have been able to notice and remember the name on the name tag.

It’s about at the right height for it to be eyeball-level, I figure.

In one novel- a cute woman calls her boobs, her “odd eyeballs”.
Bleah.
You can thank the post-Ian Fleming, James Bond novels, for that! :)

Even if he’s not a regular, that would still be a plausible explanation… After all Nina IS quite memorable.

Wish the teen well. I had my gall bladder removed a few decades back. Waking up in the recovery room was where they discovered my allergy to opiates. Fun times….

10 slights before he becomes MGTOW, 2 if he uses 4chan.