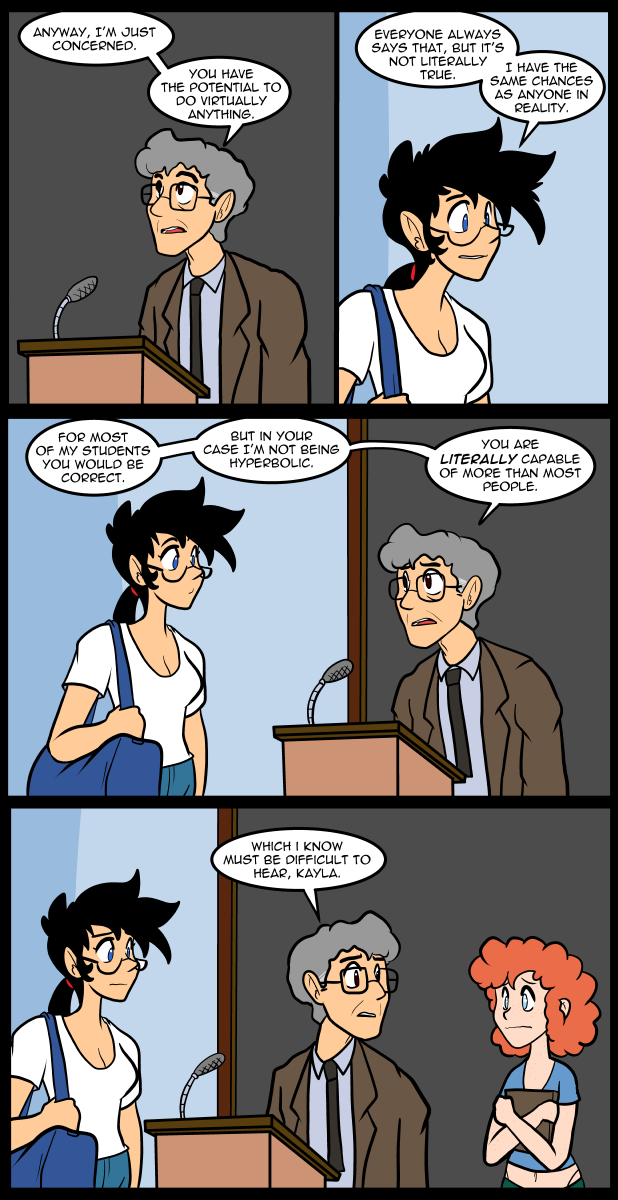 This page was going to end differently, but the idea of someone standing there the whole time, listening to their conversation, made me laugh so hard I put it in instead. I don’t know if anyone but me will find this funny, but I was thinking about it while I was doing other stuff and laughing to myself. I briefly thought about having the person off camera be one of the other cast members, but decided it would be better if it was just a throwaway character. Although if she proves useful I may use her again. Also, in one version Kayla responds, but I thought it was funnier if she just stood there in silence in the end.
I hate to throw any character away offhandedly. I actually thought of using the girl Reggie tries to help early in the comic, but thought she might have been a little too below average to believably be in Jessica’s class. I actually intended for her to come back at some point, but was put off because I thought I made her seem so dim it might have been tedious. Now I think I could make it work, but if I decide to use those ideas is anybody’s guess.
Most of the background characters have, at the very least, a framework of a biography so I know how they’ll react in situations I might need them for. The three slacker kids who only have nicknames, for example, have little bios that I can use for reference. They aren’t set in stone because they don’t need to be. Emo Snape is probably a mix of Kiowa native, Mexican, and white. His exact mix was never decided on. His name, in my head, has always been Raul. Vermin is probably a Vietnamese white mix, but I’ve never settled on a name. Rooster is just your garden variety European white and his given name in my mind is James. Which would make two background characters with that name. Of course I’ve known a handful of James’ so that’s true to life. All three of them have bad home lives in one way or another. Snape has no dad, for example. Rooster has somewhat abusive parents. Vermin feels like a disappointment. It’s never come up, but they also know Jolene. I wanted to explore that a little but it was just one more thing in the sea of story ideas I want to use.
(When I was in college I was friends with 3 Brians who lived in one apartment. They made a little sign for the door that was Brian to the third power. When one moved out they changed it to Brian to the second power. I used to play Super Bomberman with them while they were high. The thing about James made me think of it.)
Its better to have too many ideas rather than not enough, but I always wish I could get to them faster. It’s a lot for one person to do though.

you are literally capable of more than most people. *

Haha love it, honesty about a students ability from a teacher.

I don’t know about the States, but there’s the principle in education here that is along the lines of “there are no bad students, they just need more time & attention”.
And while there *is* some merit to that – people do learn in different ways, & not everybody flourishes in a classroom – as somebody who teaches myself, I can most definitely assure you that some people are just *dumb*, and no amount of time or attention in the world will change that.

I know it’s probably not a place for politics, but that’s a concept progressive liberals (or just leftists, if you will) refuse to accept, or even comprehend.

Sadly, no. Politicians (from both sides) enjoy meddling in education and science too much to allow for something like that.

Obama’s ‘Race to the Top’ (Think No Child Left Behind but even worse) outright blames the teachers for failing grades. Not budget cuts, not assbackwards budget priorities, not parents who don’t get involved in their kids education; just the teachers. Granted, there are some teachers who just shouldn’t be allowed to teach (including some college professors), but that’s only a small fraction of them.

That has happened to me a many of times. Also I just finally got caught back up with the comic.

Yes. Poor Kayla, new character that suddenly gives Brooksie some competition for “Most Adorable Character.” (Finally. Not saying I don’t love Jolene. Absolutely I do. Just saying that there should be someone to make her question her supreme cuteness.)

If Jackie wanted to be really mean, the next panel would be Kayla running off crying her eyes out :-)

Are Kayla and ‘Prof’ related? If so, a truly heir razing experience to hear that from her Dad/Uncle/…

Uncle, that snot a niece thing to say!

I’m so glad i wasn’t taking a drink as I read this because I would have literally spat whatever I was drinking all over my monitor.

Well, that’s just the way it is. Isn’t it?
Although Kayla is already rocking the cute metric, so i think she will be okay.

Yeah, with puppy dog eyes like those, she’ll go far.

Those with the most potential tend to waste it. Those with the least generally are the more successful, due to being more determined and tougher

Exactly. There was a research in which it said that beyond of an IQ of 125, the potential exploits of intelligence or accumen were almost like diminishing returns, and character, emotional focus or emotional resilience became again the more prominent factors for success.

Am I the only one who notices that Kayla is wearing a G-string? Because those aren’t sketch lines for her hips…and hot damn, do more beautiful ladies need to wear G-strings! Cover the front and let the rear wobble freely! Power to the female buttocks!

Wow. He was a good guy, until the last panel. Man!

In high school I had to so a debate in sociology class on a team with two guys named Rob. We were debating legalizing prostitution on the pro side. When you consider the fact that it felt like the whole class wanted to lynch us for even considering the idea at the start of the debate and by the end if was too close to call, I call it a victory.

Poor Kayla. Her shirt should have been RED for Operations, not BLUE for Sciences. We all know what happens Redshirts.

Jackie, this page is testimony to your genius.

And yes, I too hear Ben Stein’s voice when the Professor speaks.

Kayla is so cute D:

must hug cute little red head before she starts crying

Damn not even sparing another student

You linked an earlier page in the comic, which is like a TV Tropes link to me, honestly. I was reading through a bit, and came across this page:

Found it similar enough, that I had to post it for laughs.