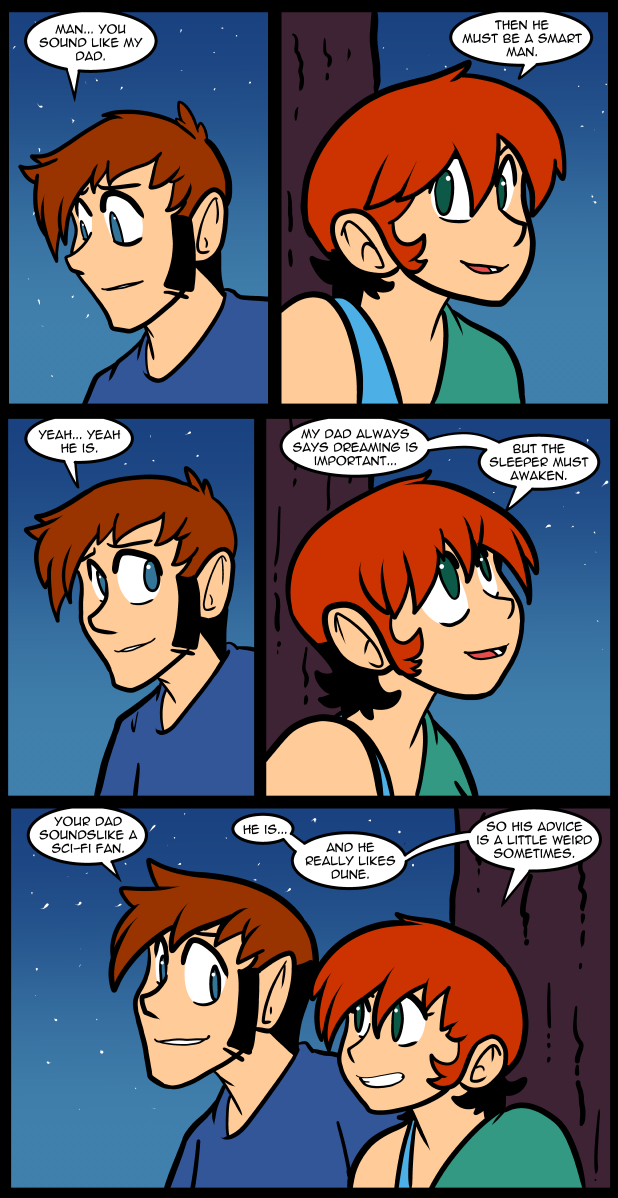 Dune. It keeps popping into my life at random so it infects my work. I listened to a fun review of the book versus the movie the other day. The movie is terrible in a lot of ways, but for whatever reason I love a lot of the stuff it gets criticized for. The bland acting for one. You just know that the actors, who you know can act, were being directed to deliver their lines without feeling for a large portion of the opening scenes. You don’t get that many great actors together and they all give you performances like that on accident. Except for Patrick Stewart, who apparently can only turn down his emotions to 5.

Anyway, I have this whole backstory built up about Carol’s dad. It may never get used, but I worked it out just so it would be consistent within her. They’ve all been at least thought through to a point for every character, since the people who raise you have a big effect on who you become later on. Unless you’re broken inside, then they either make that even worse, or offset the damage a little bit if everyone else is lucky. It’s not hard to work out what her dad’s life has been like with a house full of women. His wife is obviously a lot like Carol as she’s said as much. The other girls are pretty feisty too if her stories are to be believed. There was at least one very strong sibling rivalry which he would have had to mediate many times, I’m sure. He’s been fighting the good fight for a long while basically.

I think I might have caught a cold. Possibly I’m just having especially bad allergies. Either way I’m a little under the weather today. My nose tends to be clogged in a very dry way, but today it’s actually running a little bit. I try to stay clean but every so often someone manages to sneeze on me, or whatever, and I get a little something. Like I said though, I’m not sure. The world smells like flowers and dust, so it could be that too. I really hope it’s allergies because otherwise I’m set to have a really bad rest of the week otherwise.
The Teen and Mom are out of town for the week, so it’s just me looking after Dad and the dogs. I’m not great at this when I’m feeling fine, so you can imagine how bad I am when I’m feeling sick. I haven’t had a cold, or the flu, since before I went into the hospital the last time. That’s a pretty good record for keeping out of the germ radius of other humans, especially when you consider the Teen’s insane hug lust and reluctance to use hand sanitizer. The last time she was sick I wouldn’t let her touch me and she finally gave in and started paying attention to what she was touching on a daily basis. She was sick enough for long enough to see the benefits of not licking doorknobs.

My dad liked Star Wars, so we always heard “Do or do not, there is no try.” Which, upon multiple hearings, makes less and less sense the more you parse it out. It essentially means do it the first time or quit, which is fucking terrible advice, and a really messed up thing to say to a child.

If you were to look into place where men fear to look, you will find me looking back at you.

I’ve always heard it as “Do it like you expect to succeed.” Which is half of maybe-good advice; the other half is “…and while you’re doing it, pay attention to the result you’re getting and adjust constantly.” By itself, and unexplained, yeah, it’s pretty bad.

Just so. And when I said it to my kids, I always tried to use a tone of voice that let them know that not succeeding was OK — as long as they honestly gave it their best shot. I’d still love them just as much, no matter what.

I’ve always thought of it as, “Stop trying without expecting to succeed. If you’re going to do it, do it. If you don’t do it well, you still did it. If you failed, you haven’t finished doing it yet. So do it, or don’t do it.” It’s based on how many people say that they try, but they don’t expect to get anything right when they try, and thus they often set themselves up for failure. If you think you’re going to fail anyway, what does it matter if you skip this small step, or don’t check that one detail? Yet, in the end, that step or detail may be the reason you fail to begin with. So stop trying and just do it.

Sometimes called ‘fail faster’. And good gravy does that mindset need to be taught in schools. Kids are so damned scared of being wrong these days, and it it certainly didn’t help out generation, either.

ExtraCredits over on YouTube has some great episodes on the gamification of education. And some of the ideas have even been tested and proven. We need to move away from the standardized test format.

I think it is all part and parcel of the anti-science mentality that has been out there for a couple of generations.

Science is all about failures – you have to know what does not work and why. This way you learn to consistently get something to work or modify it latter because you know how and why it works or fails, especially fails.

Catastrophic failure is something you don’t want to hear outside of a testing lab where those words evince actual glee.

…and after all this conversation, she’s still half out of her T-Shirt!

You don’t out the shoulder away if you want more kisses there.

Yoda was a really, randy blaggard, wasn’t he? :D

That said: The advice *was* in context, so taking it out of one context and placing it into a new, non-similar, context could result in terrible advice.

The last time that happened, it cost the lives of an entire crew, save two that both ended up dying later anyway, and only ended by pure luck. Let’s not call him back up just yet.

When i was first working and doing school i remember my dad giving me some coffe and after drinking it i mentioned ‘yes this is it, the water of life…FATHER THE SLEEPER HAS AWAKENED.’ He being a dune fan like myself thought that was great. The all-Caps part spoken louder than the rest btw

I don’t know how expensive they are, but certain metals like copper or brass are naturally anti-microbial. If you replace the doorknobs in your house with ones made of those metals, you’d be able to lick them all day and not catch anything.

So put capsaicin paste on silver doorknobs and everybody will be golden. Just don’t rub your eyes.

*Blushes*. With capsaicin, + other hot spices, don’t touch your eyes, or ANY OTHER sensitive areas.

He who controls the spice controlls the universe.

Is it just me or there a lot of references to BBQ in these posts?

What? Nobody quoted the Litany Against Fear yet? Either you people are laying down on the job, or it’s rolled past ‘cool’ and into ‘too mainstream’ territory… ;-)

Haven’t heard of it.

Yeah, my Dad was a Science Fiction fan, too. When I was 13 or 14, he gave me most of his collection — some stuff going back to the 1940s, most from the ’50s and early ’60s. He was dissatisfied with a lot of the later stuff. I gave him a copy of Again, Dangerous Visions, Harlan Ellison. He gave it back.

Probably not The Sleeper Awakes you were expecting, but I love H.G. Wells’ work.

Old fantasy? I recently read Carmilla, by Sheridan le Fanuu. Pretty good stuff. Some think that it was some of Bram Stoker’s source materia for Dracula.

It was source material for Bram Stoker, and it was the very first time that lesbian vampires were introduced into pop culture.

Sheridan Le Fanu published Carmilla in 1871. I’ve read Edmund Spenser’s The Faerie Queene (first half published 1590, contemporary with Shakespeare) and Sir Thomas Malory’s Le Morte d’Arthur (1485). I’m also a great fan of Geoffrey Chaucer, who stopped writing in 1400 on account of dead. In 1380 Chaucer completed an excellent piece of fantasy and social satire called The House of Fame; Seriously old fantasy! If you can find a good translation from the Middle English, I think it’s it’s as good as his The Canterbury Tales.

I had a similar revelation about the Star Wars prequels. So many fine actors delivering such shallow hackneyed dialogue poorly… It on was the writer for writing poor dialogue, the director for bland direction and the producer for not calling the other two on their bullshit.

…which for the prequels meant it was all George.

Ja, his ex-wife Marcia really made the original trilogy come together. At least according to several folks who worked on them.

I hadn’t heard that before. I suppose she would be like Gene Coon was with Classic Trek. The largely unheralded success factor…

Dune was actually a source of immense emotional support for me growing up. The Litany against Fear came in very useful for steeling myself for what I had to do on many occasions.

I must not fear.
Fear is the mind-killer.
Fear is the little-death that brings total obliteration.
I will face my fear.
I will permit it to pass over me and through me.
And when it has gone past I will turn the inner eye to see its path.
Where the fear has gone there will be nothing. Only I will remain.

Oh, and get used to the cold. Mine’s at two months and counting. You’re close enough, it may be the same one.

In my personal opinion, we need more Dune references in life.

If you liked the books but not the movie, try the 6 dvd set of the mini-series, that was pretty true to the book. Damn sight better than the movie. It covered the first three books.

Did you ever play Dune 2: Battle for Arrakis? That was a great game!

As I recall, it was simply Dune 1 with prettier pictures.

As I recall, it was simply Command & Conquer without the rights to the source material.

I feel like considering Carol’s body frame, you’d imagine her arms to be wider. Though it seems shes just petite but well endowed in the breasts and hips.

How would you describe her body frame?

If I were to guess id say pear shaped, but with pretty big breasts to boot…