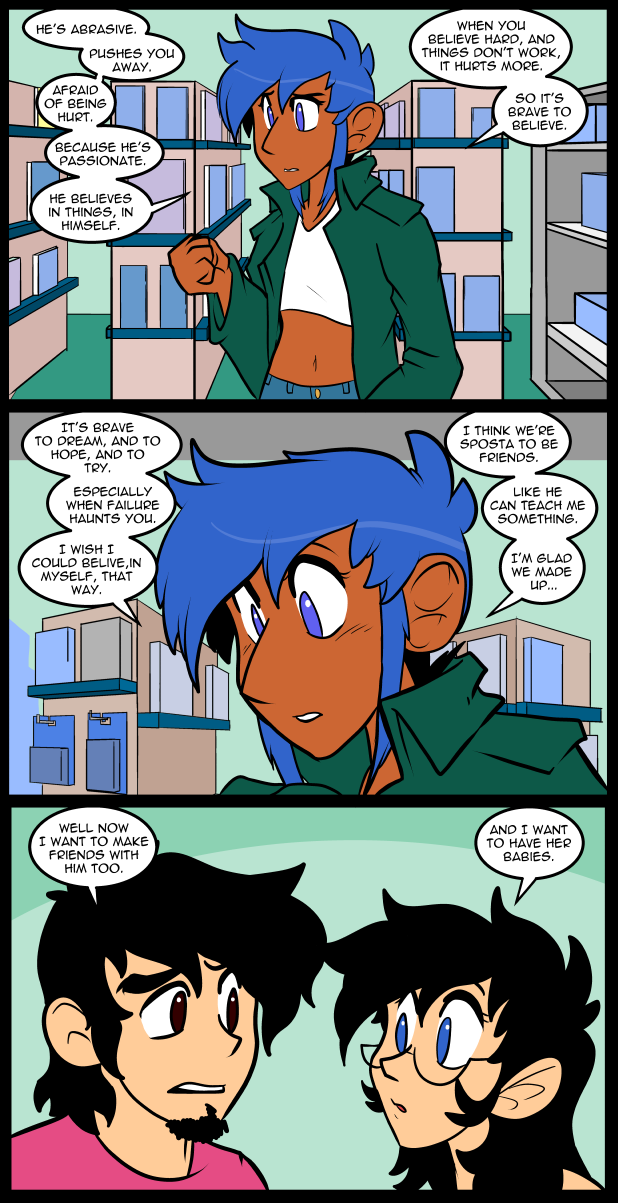 This page has been one of those ones that just refuses to save easily. It’s a real pain because it just sucks up time trying to figure out why it won’t work right. Thankfully it finally took.

Apparently my trip didn’t totally agree with me. My bad foot has been swollen and it doesn’t get better unless I lay down, or raise it up. That wouldn’t be so much of a problem if it was my right foot, because I could raise it up and draw at the same time. Since it’s not I only get a little relief from it when I go to bed. I knew I was pushing things by making that little excursion, but dared to hope I had healed enough for it not to be a problem. I walked all over on it, at one point my hip went out, which might be what is causing the swelling to flare up. I’ve avoided as much salt as what food we have allows and it’s not backing off as much as it usually does. It doesn’t appear infected at least. Possibly the activity cause some of the less hearty blood vessels to give out. I’m just taking a guess. My heel, which is in much better shape than before I started doing the salt soaks, cracked. I expect from all the walking. It was also a little too hot now and then, so maybe that played a part. We went into the trip without much of a plan. I probably should have rented a room, or something, where I could have controlled the environment a bit more. I could take another pill that makes me pee more, but it’s already a mess trying to guess how much water I need from hour to hour. All signs point to me being dehydrated, but the foot stays swollen.

I quit taking all my allergy medicines. They cause such terrible insomnia its either that or I stop sleeping. It takes days for Flonase to start working properly, so by the time I’m getting relief ive stopped sleeping, which defeats the purpose of the medicine. The nasal rinse I use seems to be keeping the worst allergies at bay, but it’s not perfect either. I still have occasional spells of asthma like symptoms. Apparently the new drug I quit using at xmas was an asthma one, but the bad reaction I had when that and the anti depressant were introduced together makes me hesitant to try it again. It basically ruins me for a day, so I hate to chance losing one when I’m already so far behind.

Speaking of being behind, I’ll be doing the patreon story update in the middle of this next week or the week after. The sketches are also slowly being whittled away at. Every time I get a little bit closer to caught up something fucks me over, so please forgive me. I am trying to keep up.

Only for another 5-10 years. They figured out how to get two egg cells to combine and create an embryo in mice by getting one egg cell to “believe” it was a sperm cell. Kinda weird but hey, if let’s two women have children together, I’m all for it.

Good to know when to duck: fundie outrage over that one would be outrageous.

I think the technical term is scientifical lesbian rainbow babies.

Outrage: putting the “fun” back in fundamental.

Feel free to duck, I’ll be enjoying popcorn from a nice, secure bunker.

Hopefully that Bunker is on the moon… of Pluto. Only way to be safely far enough away.

Be careful about buying tickets to Pluto!
I think the space shuttles, + rockets, only sell passenger tickets to planets, and scientists tell us- that Pluto ain’t a planet no more.
Poor Pluto. : (

Well, yeah: wikipedia says that Pluto is no longer a planet, but is now called, “a dwarf planet”. Wha?

Dwarf planet has the word, “planet”, in it’s name, but somehow it is not a planet, anyway. *confusion reigns*
A pox on language. Gadz!

It’s a Small World After All!

That’s sort of how it works for some parthenogenic lizards. Except, it’s with the X an y chromosomes. The lizards mate with a closely related species, then the chromosomes from the male parent are treated as Barr bodies and the mother’s two X chromosomes determine all of the offspring’s traits.

Actually, it is not only already possible, animal trials are quite successful.
It’s just not legal to create humans this way.

Jo will be busy redbuilding bridges in the future.

The first panel makes Jo look all Sherlock Holmes because the bookshelf looks slightly like a pipe in her hands. Adds to the speech! Now she just needs a hat

This isn’t a hat! It’s a death Frisbee.

A show with episodes that long is almost a movie, right?

Technically, yes. Them being designed with commercials played between episodes (I really wish we’d adopt that) also helps with the semblance to movia.

I thought so too. Jackie must now draw Ninjo with a deerstalker hat and a pipe and saying curiouser and curiouser. No hurry, but it must happen.

Alice, Holmes, and Jo. Yes, that is a good combination.

Framing get her with all those shelves in the first panel pointing to her because of the perspective was genius.

I love how Reggie quietly became one of the most complex and developed characters in the comic.

That speech at the meeting about his first time was quite the eye opener.

I really like this page. Poetic but not sappy, and Jo really is talking in her own voice. In some comics all the characters talk the same, but you really do a good job giving your characters their own voices. You continue to make one of my favorite comics.

Reggie x Jess I ship it.

Missread jess’s line. I stand by my previous statement still.

It’s funny how Reggie effects Jo. As though he’s unintentionally cast a spell over her.

Nah, Jo she’s just quoting a misspelt line from a movie she’s seen. She’s so good at it she even changes the speech bubbles.

” her” babies. Jesus, for a moment I did misread as “his babies” and feared that Jess´d have gone to do the wild chase of the golden goose…

By the way, I would love to have a Jolene in my life. She´s kinda amazing. The smart kind of amazing.