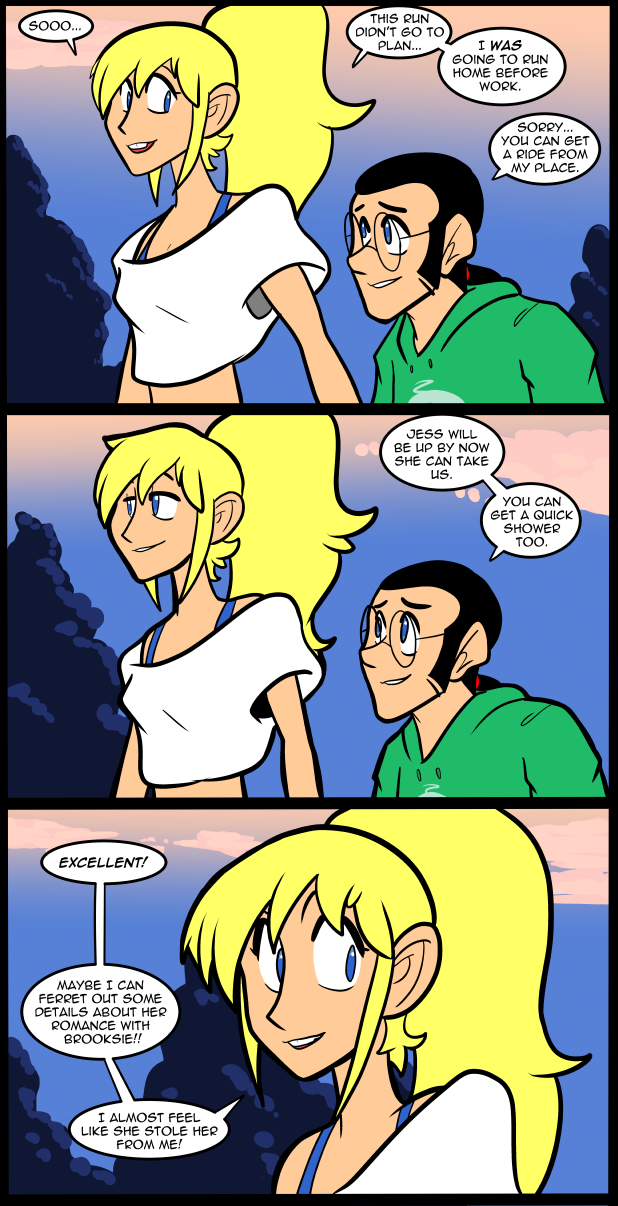 Nina really is having a ball recently. Carol and Thomas are a thing, Jo and Jess are a thing, she and Ed are a thing… Her world is on the verge of becoming a paradise for someone who feeds of romantic energy. On top of that Ed’s relationship with his sister and Jo is nice and complex. It’s a wonder she hasn’t passed out from the sheer joy of everything.

I went in to town twice this week. It really threw off everything for me. I’m going to go back to not going anywhere for a while if I can help it. My foot swells up too much if I walk on it for longer than an hour or so. It comes out of my shoe looking like a reverse image of the insides. I have to go back tomorrow morning, but I’m hoping to get right back asap and then getting back into the swing of just working on comic stuff. This illness has really caused my work to suffer and I want to get back to improving things, especially since I learned new stuff.

I’ve finally got everyone convinced that I only need one meal a day. I eat a tiny bowl of something when I would have taken the other two meals before, so as not to cause a starvation response, but that’s it. I’ve cut way back. It’s still really difficult to have so much junk food in the house I’m not supposed to touch, but the stuff I’m allowed to snack on in hidden from me and can only be received from the gatekeepers now. I can also have whatever as far as fruits and vegetables are concerned, so pickles and bananas, or whatever help keep me from seeking out chips or what have you. This is basically the diet I had in the hospital and I lost 30 pounds in ten days. Lost it and didn’t feel any worse for the change either. Since I don’t labor for my job there’s just no reason to eat like I do. The idea of 3 meals a day is just so ingrained in our culture it’s hard to convince people that it’s not really a necessity anymore. I don’t need a lot of energy to fell timber or escape bears.

The cpap company never turned in my insurance paperwork like they were supposed to, but since it was their error I basically got this whole period I’ve had the thing for free. On my current insurance I will probably not be able to afford having the device for long. I’m going to try to switch to something else because I make so little money a year right now I qualify for a poor people affordable health care plan. Which basically amounts to getting the device for free. Hopefully on Tuesday I will get to see the breathing specialist and she will sort out this problem with the mask not working for me. Or whatever all is not working for me with this thing. I keep waking up choking and stuff. With any luck all of this bullshit will start turning around and I can finally start getting some real work done again. Being tired constantly, feeling sick, and not being able to go and do things when I need to has got to stop.

in theory, if I lose enough weight, I may not even need the breathing thing, which would be fine with me because it shorts out the power too often.

In case any of you patreon subscribers haven’t looked at your messages I’m offering a 3 page preview of my story for the Muffintop 3 anthology. If you’ve pledged for at least one month I’ll send you the preview. Just message me at betweenfailures at Hotmail dot com. Put patreon muffintop preview in the subject line and verify your patreon name so I can check your status please. If you don’t like cute, chubby, monster girls it probably won’t interest you, but if you do you’ll want to get super excited for the release date and tell lots of people you know who have similar tastes. There will be other artists in the anthology too, but I’m not looking it up because it’s a pain in the ass. At least some of them are as good as me and probably one or two are better, so that’s enticing, right?

If you sign up for Patreon and haven’t pledged for at least a month I’ll probably just be nice and let you see the preview too, but don’t be a dick and sign up then cancel just to see the preview. That’s the weakest of sauces.

In other news, Dorothy, my dog, broke her toe the other day. There’s nothing to do about it apart from just keeping her from doing a bunch of running, but if she keeps breaking it over and over we may have to pen her for 5 weeks. That would be the worst. T^T Basically we have to just keep her from tearing off after dumb shit… So, no worries?

It’s okay Nina, you can probably adopt both of them as cuddle friends and they will be very okay with that.

Well, I dunno about ferreting out any details from her, but if she walks into her room without knocking she’ll almost certainly see a few. :p

so.. is her face in the second panel her laughing at the “ride at my place” thing?

That was my conclusion too but you beat me to it.

oh poor john. Hes gonna have a sad workday. Reggie will be business as usual.

Everyone is pairing off. By the Pigeonhole principle, John’s gonna end up with Wes or Mike

Mike would be a caring lover.

You could pair him with one of his higher ups.

(…who will probably use him for sex and discard him…like that band camp girl in the first american pie movie.

or Ted’s manager in “Better Off Ted”.)

While I want to respect Crave’s story and his characters, this is great, if this doesn’t actually happen, I’m gonna ask if fanfiction can be allowed of this pairing ^___^

Sooo “snuggle time” is going on at home and they are returning back to see them both. This is gunna be good.

Uh oh, I wonder if Jess will make a pass at Nina, and Jo will get upset. I mentioned an earlier foreboding feeling I was getting! ;-; Something bad is gonna happen because I’m a pessimist and know how stories like to have drama when everyone is seemingly happy! D:

Just wait a bit more so we can say “Called it!”

Protip: If you’re skilled enough, you can smash the bear with the falling timber, and then go drink a gallon of gravy BECAUSE WE’RE MEN DANGIT.

Seriously, though, it’s good that you’re restricting your calories. Gesundheit, l’chaim, and so forth.

…Give me a minute… *Psyches up*

If I had the time I would, but I’m barely keeping up as it is. Just know that there’s a lot of hot dumbledore action.

We can say “yaoi”, but we can’t say “gay”? It’s like I’ve been saying for years: when you cuss in a foreign language it doesn’t feel like you’re swearing.

Because “gay” isn’t as specific. It includes “yuri”.

Well to be honest if I had taken a wizards wond up the butt I’d tell yaoi too. Plus I think it’s more towards meaning cute rather than gay but I’m not entirely sure about that.

Couple things, health-wise. I was recently in the hospital for somewhat similar things. You might want to watch the sodium in those pickles, sodium might be having an effect on that swelling issue. Also sodium = water retention = weight retention too. I have one of those cpap face mask dealies so I can relate to your misadventures with it.
That being said, pair Reggie with the librarian. John’s’ Lothario ways might keep him from something meaningful for a while to come.

Well, I just said pickles to save the explanation. Its really just cucumber slices and onion slices in vinegar. Theres no added salt or anything. I don’t add any at any rate. Just pepper. Its not like pickles per se. I actually cut my salt use way back a few years ago. Unsalted peanuts, no table salt, etc. The rest of the family says things taste crappy, but you get used to it and start tasting other things.

Not bad for a first date.

So she has work clothes in some locker at work? Did they have a locker room? Not every place does.

She is really something else.

Afterthought though in this pic she doesn’t look like she’s 6’3″.