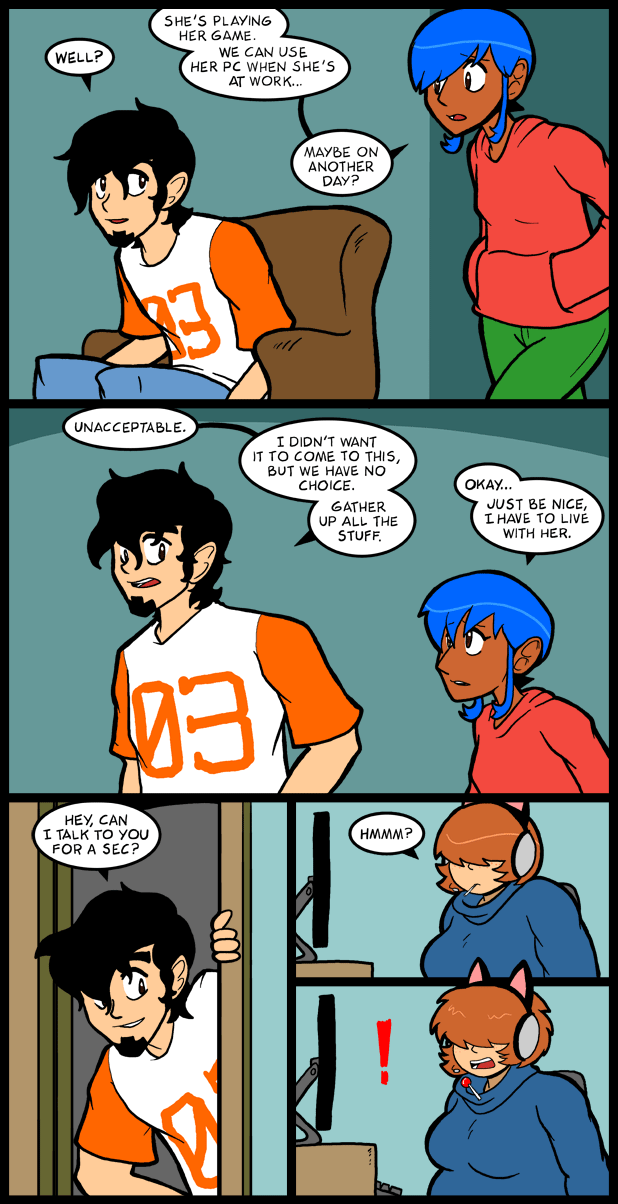 I’m not a fan of Metal Gear particularly, but I can’t help but hear the alerted guard sound when I see a red exclamation point.

I didn’t have time to make a buffer image between this part and the last one.  I totally had one in mind too.  I need to make a note so I remember to go back and do it later.

There’s a new Snoopy app for the ipod that I got.  It’s free, but you can pay for extra junk.  It’s even more mercenary than the Smurfs app, which is saying something.  Pretty much every good item is a cash purchase.  It’s really well made though.  There’s talking and the music from the shows.  I like it.  I’m not sure how many people remember Snoopy anymore though, but whatever.

Id like to have a game like that for my comic.  Where you set up the store however you like and the characters wander around and do stuff.  That would be cool.  I had some dude come to me with the idea of having a game based on the comic, but the dude was all talk.  Nothing ever came of it.  Of course, by that time, I already knew the guy was nothing but hot air, so I wasn’t particualrly dissapointed.  I expected nothing less than nothing.

I guess it’s something to shoot for down the road.

You can usually tell who is serious and who isn’t by how far up they aim and how into it they get. Not to say those who are capable don’t get excited. But when someone is spouting ideas willy-nilly and such, they’re usually just talk. Then again, there’s also those who -can- do it, but are lazy.

I guess I’m saying: If you’re after someone to make a game for you. Pick the one who’s down to earth about it and doesn’t offer something super-amazing. Something to think about…. I tottaly forgot what I was actually going to say when I started writing this commet. Darn.

I must also place myself in the corner of shame for not instantly realizing what the last panel was. I’ve played all the games…

Thank you. Glad you enjoyed it.

Screw John’s taste in women. You’ve drawn yet another sexy female character (though this one is in a very different vein of sexy) for the fans to lust over.

Just about any stylised “cartoon” person will come across as more attractive than someone of their equivalent attributes would in real life… precisely because they are stylised. They match the basic, simplified notion of what a person is in our minds without being bogged down by all the icky, disgusting details that real people also have.

Not only that, but generally artists don’t go out of their way to draw people “kinda ugly”. Characters are always going to be somewhat idealised in some manner or other.

I believe the sound effect you’re looking for is the one from METAL GEAR SOLID 2 when Snake is spotted by a terrorist.

Lollipop falling out of mouth makes up for hidden surprise-eyes! :D