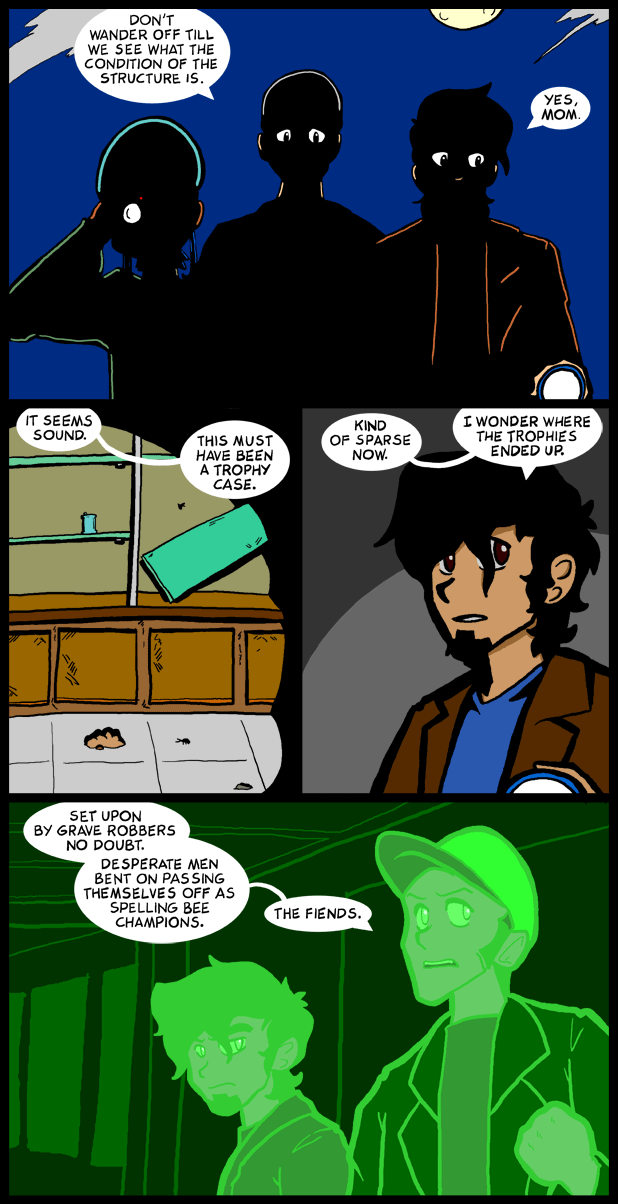 This is such an odd page with the switch to Jo’s point Of View at the end. Approximating night vision in my style was interesting. Having seen about a million paranormal shows it’s certainly not something I’m unfamiliar with, but translating it was new. I also didn’t want to use it too much because I don’t think it’s visually pleasing. That said, it’s silly to make such a big deal of getting the camera and then spend the whole time ignoring it. I’m going to switch it up, like they do on those shows. So that you don’t get sick of seeing it.

It’s not really connected to this page in any way, but Elisabeth Sladen, who played Sarah Jane Smith on Doctor Who, passed away yesterday. I just wanted to make a note of it since this is sort of a journal for me as much as just a blog for the comic. Experiencing the loss of a beloved celebrity is very different now. We kind of have an instant support group with Twitter, Facebook, or what have you.

I’ve never been a fan of something quite like Doctor Who. I wasn’t even born when Elisabeth Sladen became a star on the show, and it had already been on television a long time. It has led to making friends with people I probably would never have if not for the longevity of the series. Heck, I even got offered a shot at working on the show. How crazy is that?

Anyway, I’m not really going anywhere with this. I just wanted to make note of it. I’ll talk to you guys later.

I thought the others were supposed to be here as well?

The other cast members? Nina & Ed explicitly stated they couldn’t, Carol is stuck at the store with Mike, Wes, & Reggie, who weren’t even asked. I guess by her actions it could be inferred that Jess wasn’t interested. It’s just these three.

That last panel made me think of Jo suddenly going crazy and stalking them all like a Predator.

I like the different mix of styles. The shadowy outline thing is pretty awesome if you ask me. Though I think the eyes, at least Thomas’ should be less bright, like the camera lens makes sense as it reflects more, but I think the eyes wouldn’t work as much, even in your style

I still haven’t seen any of the Dr. Who series, but I did catch a couple episodes of Sladen’s spinoff last year before I even realized it was a spinoff. That’s really a shame.

Folks need to watch more Ghost Hunters on SyFy. I think Crave has come pretty close to nailing how eyes look with an infrared camera.

My first experience with IR Night Vision was when I worked Security at a Secret Navy Research Base (yeah, I really did — 1987-1990). We were expecting a VIP visit from POTUS the next day, and the base Deputy Chief of Security put me on a rocky escarpment and handed me the brand-new Night Vision Scope. AWESOME! He just gave the biggest geek on the Guard Force the highest-tech toy in the armory. Did I make good with it? You betcha. A few hours later, I spotted an inflatable Zodiac-type craft coming up the river, manned by a domestic activist group the name of which you’d all recognize. We notified the Coast Guard (I could have hit their Station with a stone) and they dealt with them. Attaboy time.

Ah, “paranormal” shows. Most Haunted was both hilarious and annoying.

I hated Most Haunted with a fiery passion.

I stopped watching Ghosthunters when it started to suck…

Yeah, I still use it for white nose when playing my DS, but the last few seasons have really gotten lame.

Well, at least she finally joined Jon Pertwee, but still, my first companion crush is no more. Since I haven’t had cable in quite some time, I have to ask, what’ll happen to “The Sarah Jane Adventures” now that she’s passed on? Or was it already finished as a series?

I think they were considering renewing it, but it’s my understanding that the series has some level of closure.

Really digging the night vision in the last panel there! It looks awesome.