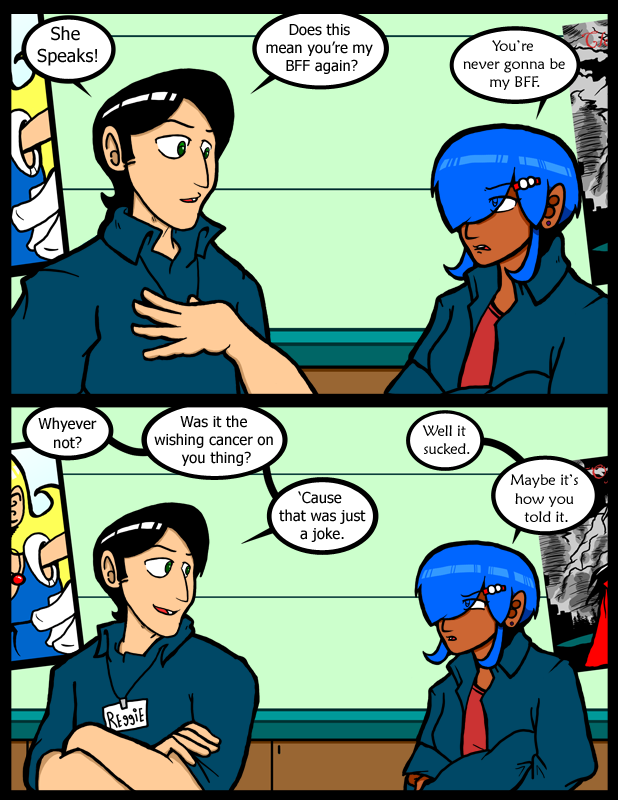 Man, what a bastard. I’m not sure if I said this before, but once upon a time Reggie was going to be the star of his own series called “That Bastard Reggie”. I used that as the title for the first page he appeared on for that reason. I never finished the idea for TBR because back when I got it I figured no one would ever get into a concept where the main character was a total douche. MTV and time proved me wrong.

Man I hate that dick.

MTV was once accused of “Killng the radio star” but i don’t think that’s much of a bother seeing as though they never do anything music related anymore. As for Reggie, I would like to see Ed punch his face.

Nowadays it seems like a lot of the stars to many shows are all incredibly irritating jackasses. Whether it’s reality shows (Kim Kardashian), wrestling shows (John Cena), sitcoms or cartoons (Peter Griffin) it’s like it’s become the norm for the main character to be a tremendous douche bag. (Oh how I wish Bumblebee from TF Animated would just die…)

Whoops! Forgot to leave my signature in the above comment, my bad.

I for one have always been fond of the classic bastard character in many television shows and series, usually because they’re the bad guy. But there’s something about this Reggie fellow, you know? Maybe it’s because he’s an active bastard rather than a reactive one, which is my usual method. But maybe I’m reading into it too much, he’s probably just a dick.

>( REGGIE YOU ARE A BASTARD! LOL love ta hate ya!

wow who woulda thought brooksie could be snarky and mean when she needed. That shyness went right out the window. Thats why I loves da brooksie. Oh yeah, Reggie total bastard, not like redeemable bastard or clever bastard but just…hate for hates sake bastard.

There’s always one o’ them, “That guy” we all hate at work, hopefully none of ya are it….

In regards to TBR, Ashton Kutcher and Bam Margera would sue you for copyright infringement.

Why, mister Montoya I thought you were dead….. >:o)

I really hate the way he talks.

Who the hell says “whyever”, what a complete scrote.

Good G-d. I’m not a violent person, but someone REALLY needs to kick his ass.

lol. I was thinking the same thing as MisuerDomino

Why does he have such a big nametag? Is he afraid everyone will forget who he is?

even other douchebags hate reggie

I love her comeback. I’m stealling that.

*Sniggers at all the comments*

I’m Pro-Reggie all the way…. sorry Brooks, but you’re just not up to it.

I like how you use your drawings as posters in the back. Nice touch

These are the kind of people that are worthy of occupying the time of people like the antagonist from ‘Law-Abiding Citizen’ Myself I’d use oil, ants and a rusty hook.