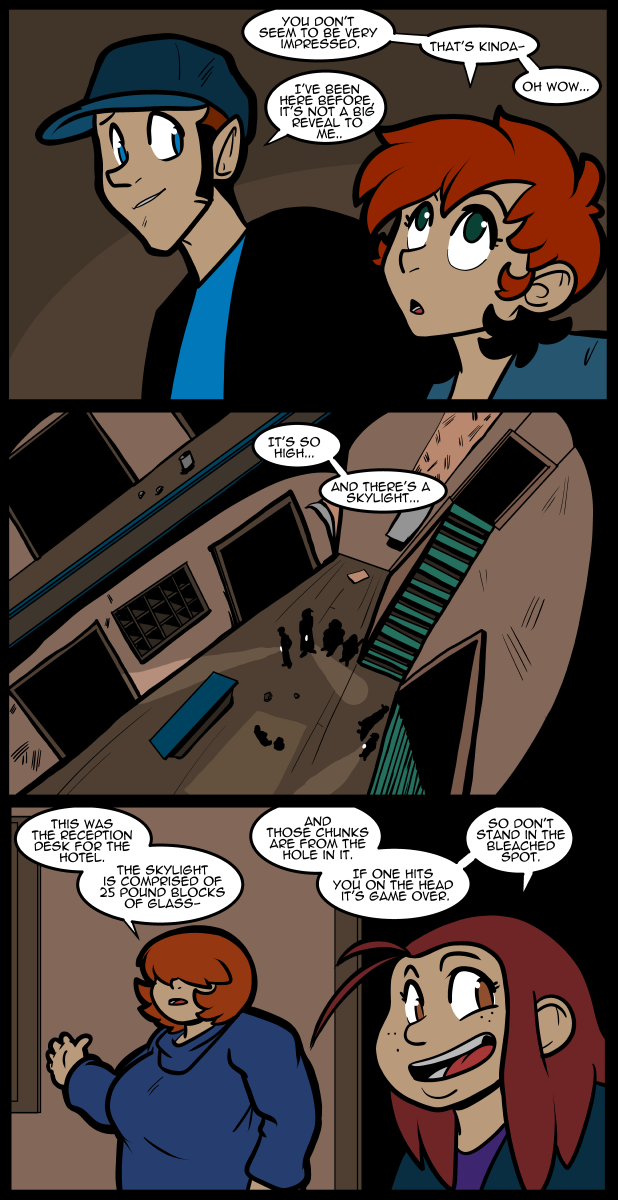 The hotel this is based on had a skylight made with the stuff described here. The old glass like that is kind of valuable, but it was hard enough to get to that no one stole it. Some of it did fall out though and it left a big wound in one of the planks. The chunk itself was mostly intact only a corner was broken off. It didn’t look like modern glass, but more like it was melting or oozing, but in a frozen state. There were also bubbles and other imperfections. Getting hit in the head by a falling piece would be almost guaranteed fatality.

I bought an accessory for my computer that goes with the drawing software I use. It’s like a little nunchuck handle for the Wii. Supposedly it will increase productivity. Rather than doing a bunch or research I just bought it on a whim basically. I can take it off my taxes as a work expense so why not? Spending money to work better is a good investment. It remains to be seen if it actually helps. I can map all the buttons to do whatever I like, so that should be interesting to mess with.

The second panel looks a bit vertigo-inducing, with a splash of German expressionism in the angles. Just the thing for ghost hunting!

It looks great… And the wierdness of the perspectives actually makes the “haunted” building more disturbing to the eye.

AFA the “fisheye lens” thing, I don’t know what illo prog you’re using, but I know my cousin (an honest-to-god graphic designer pro) can do that effect with a filter in his Photoshop… tho I’m not sure which version he uses.

The peeling wallpaper is also a nice touch. : )

It’s giving me Escher vibes with those stairs :)

Yeah! It looks a lot like the lithograph, aka the piece of art, named: Relativity by M.C. Escher.

Interesting accessory. So are you supposed to draw with the stylus in your dominant hand and have the chuck in your off-hand changing settings on the fly?

Yeah, except I hold my surface like a painter’s palette so I’m trying to figure out how to do both at once. If I didn’t have a fan stuck in the USB port it would work a lot better. It’s really meant for something on a swing arm, which is how I used to work before my foot injury. If I could get an adapter for the mount I already have that would pretty much be me sorted.

Apparently, there are a couple USB adapters out there for the Nunchuk. I might get one.

I often lie flat on my bed and put my laptop on my chest to use it. Typing isn’t a big deal, but the trackpad is a bit awkward and most mice don’t work very well on my bed (even with a pad).

Have you ever tried a trackball? Doesn’t need a large, flat area like a mouse would, but it’s still a separate peripheral you can move to where your hand is, so that’s better than the built in track pad. I’ve seen both wired and wireless versions.
I’ve been using trackballs since the DOS era. I love them!

I miss the billiard ball version from the early mac portables.

someone been watching too much final destination

“It’s like a little nunchuck handle for the Wii.”
Ahh, I have always thought of you in shorts + T-shirt. Now I can’t get the image out of my mind; “Jackie as a Ninja Assassin.” Ya’ know— nothing but just the narrow strip of lighter shadow with eyes showing, draped in a dark shadow, waiting … Patiently, to jump out and scare the ever-loving Day-Lights! out of Reggie. So absorbed in the zen-like joy of scaring him, that you’re not even breathing hard, just silent patience, … Waiting.

Glass is a liquid, although an extremely viscous one. I’ve seen some old window glass panes from about the 17th century that were paper thin up top and bulged out in the bottom.

That’s actually a myth. Glass doesn’t flow like that at ambient temperature; some old glass is that way, and other old glass is not. Some ancient Egyptian glass (thousands of years old) shows absolutely no sign of liquid flow. And even some of the glass panes which were made and installed at the same time in the Middle Ages have no thickening, while others do.