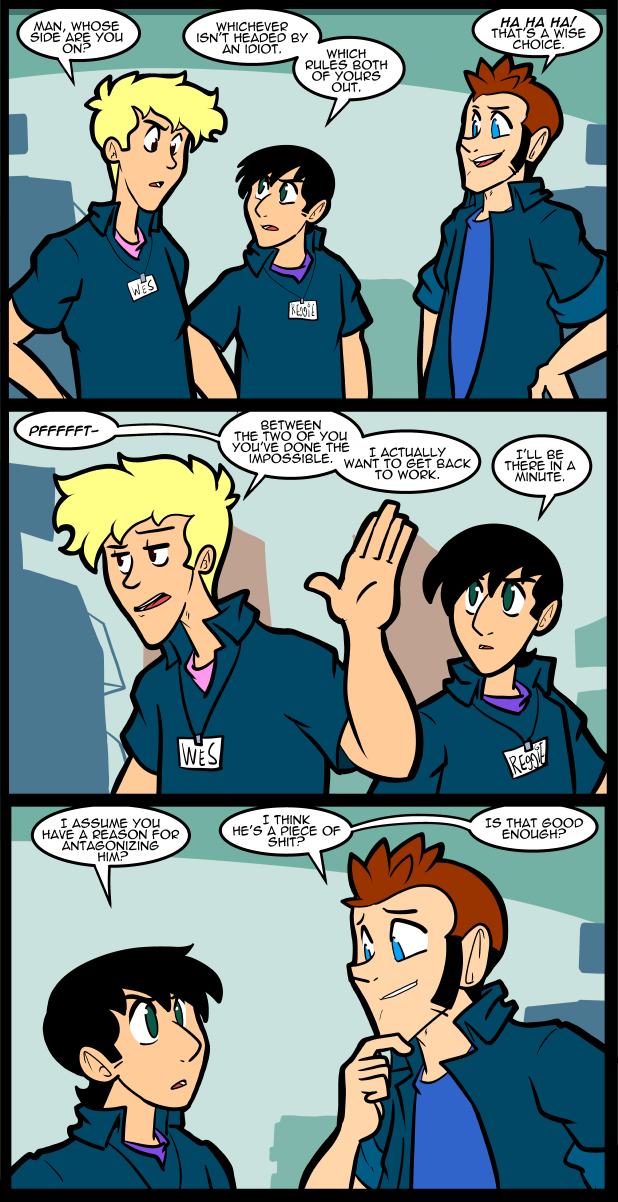 Ages ago I saw a game called Momodora someplace but it was on steam. I heard it was getting a switch port & it finally came out. It seems pretty hard, but I only played it for a couple of minutes. I really liked the art style and the videos of it looked good. The controls are tight at least, & hopefully I wont have another Hollow Knight situation. It’s really hard to play with the switch’s portable controls. The stick is always in the way on the right side. It’s the thing I hate most about the joycons. Anyway, I’ll let you know if I like it a lot or get frustrated. I won’t have time for it for a while though. I just asked Patreon for new sketch requests.

It usually IS a good enough reason…

I love that game!! You’ll like it, I picked it up on steam, only down side for me was some slow down when I went full screen.

In the case of Wes, yes, that’s a great reason. Wes is the only character I liked LESS than Reggie, and that’s even before he went to the furry meeting. I’d actually like to see Emo Snape more than Wes, that’s how much I dislike him.

I like Wes more than anyone honestly, he’s the more “realistic” character in this comic when it comes to attitude and personality

I’m another asshole. I love all the characters like family, but Wes is the one I’d be best friends with. Not that I agree with anything he says or does, but I appreciate the directness and simply stupid honesty. Everyone else here plays some kind of game.

Youd be best friends with Wes? He’s bland as hell. Some people who “speak their minds” are ones who most often need to shut up and have some common sense.

Your reply perfectly illustrates what I said, so thank you. We can be best friends!

You must be a Trump voter.

Also…what do you think “found the asshole” makes you?

The person who touched a nerve if this is your reaction. XD

Man, whose side are you on?

I would have gone for “whichever isn’t headed by an idiot”, just for quoting sake.

I prefer to switch things up.

Being realistic is not always being negative. People just pay more attention to realism when it IS negative because that ups the attention span.

I just find it grossly shallow that everyone wants to associate “realism” with “negativity”.

This is well said. Being an asshat does not equal being realistic. Sniveling indifferent nihilism and rampant toxic aggression are just as unrealistic and impractical in society as trying to be a rainbow unicorn of optimism.

I’m cynical. I trust a snarl more than a smile.

I don’t call that cynicism. I call it self-preservation.

look I might sound like an ass for what I’m going to say but I hope Reggie defends Wes just a bit, not saying that he needs it or anything but working with people annoyed or in a bad mood is not good for anyone, your coworkers may be idiots but you don’t tell them, because if you do then you have a bad mood idiot you have to deal with since you are stuck with them.

Regarding Wes. I really dislike him. I have worked with people just like that. The depth of emotion that I feel over your characters is such that, I can only conclude that you Jackie, are a master story teller. Kudos.
~ulrich

they are a little pricey i grant you but if it makes it easier for you to play the game you enjoy happy to try and offer a solution.

See, this is the reason they invented punctuation. At least LazyJ remembered to put the spaces between words. That wasn’t always a thing, either. But then, stream-of-consciousness has been getting more popular of late…

Seriously? He tries to help & your first instinct is to grade his paper?

Some people can’t see the thoughts fore the words.

“…Ah Parkside Cherry Cider after a meal”. I like that.
It reminds me of the novels by James Joyce.
[Not that I know a lot about JJ, mind you.] :)

Sorry. I didn’t WANT to sound like troll, it just kinda came out that way. Trying to read the reply gave me a headache. I had difficulty interpreting what was being communicated, and had to re-read a simple statement several times, trying to understand what was being said. I’m still not sure that I do.

Maybe it IS just me who can’t understand textese.

No one can judge you for thinking that. They CAN judge you for how you phrased it, which extremely passive-aggressive (needlessly so, really, but I snark plenty so I can’t really judge). It’s understandable that you’d have difficulty reading that, but not so much that you decided to deride them publicly for it, if that makes sense.

“Talk to the hand ’cause the face don’t want to hear it!”

Maybe I missed it in the rush, having just read the archives this weekend, but Thomas hasn’t actually justified his dislike of Wes. There must be a backstory there, but it feels like we’ve been left out so far.

As for the dialogue about poor writing, both sides have a point, but I’m both aware of my pending hypocrisy and agreement with T-Ray. If it’s expected many people will take the time to read ones words, perhaps effort should be put into how they are layed down. As Pascal was clearly aware, “I made this one [letter] longer only because I have not had the leisure to make it shorter.” Writing well takes effort, but removes the burden of comprehending the authors meaning from the reader. To that end however, LazyJ did at least choose an honest handle.

Mike didn’t consult Thomas on Wes’ employment. Wes apparently has a reputation that includes being a thief. Thomas is expecting trouble, but told Mike to wait for the trouble before letting him go. Besides, Wes keeps Reggie busy.

As for the comic, since I utterly neglected to heap the praise it deserves, thank you Jackie for sharing your characters and the world you are creating. It’s a delight to peek into the lives of people who mostly, are decent human beings having a reasonably good go at living.

Where did all this profanity come from?

The first spoken word in the comic is fuck. This was never going to be Sesame Street.