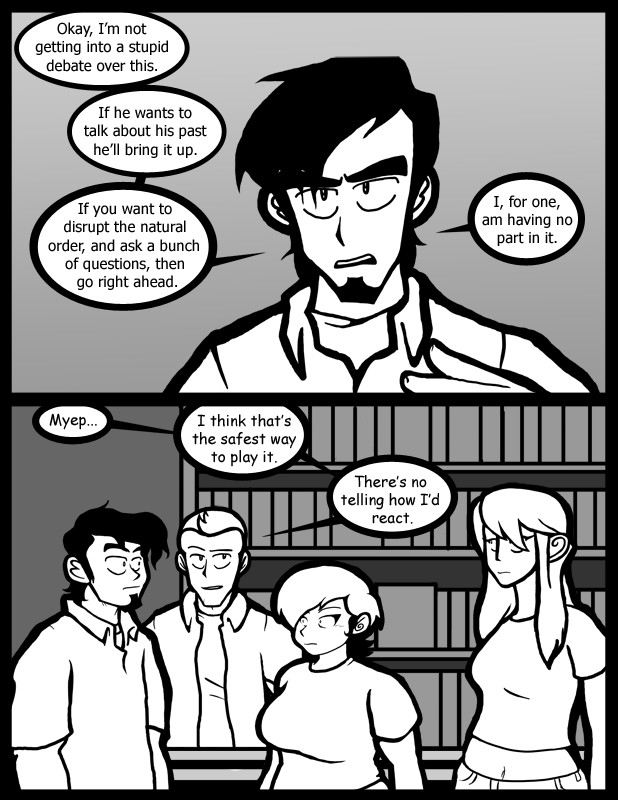 oops. lol. i be thinkin that akward silence thingy comin up

Aww I love their facial expression.

I’ll second that. There aren’t many things more embarrassing than talking about someone else behind their back, and then hearing them join in the conversation.

Nina’s expression makes those of Carol and John into its bitches and plays them all night long.

I’m starting to think that Tom taught Brooksie how to be a ninja.

You are the reason for Julius teaching Twig to shadowphase…
To those who don’t know what I’m talking about don’t ask. You’ll find out soon enough. Just keep reading Crave’s summaries for the pages. In a thousand or so you’ll find out.

While John and Carol’s expressions say something along the lines of “oh my god”, Nina’s quite simply says “…fuck”.

Well we all know at least one life is being spared tonight….

That right there is a classic example of an “OSHI-” moment.

I will now use mantastrophe any time I am about to get pissed.

meanwhile… OH FUCK MANTASTROPHE INCOMING FROM THE MAN HIMSELF!!!

Webcomic characters, just like real people, are allowed to come with multiple talents. Just because one character in a comic is known for a particular skill does not mean that everyone with that same skill has to have either learned it from them, or taught it to them.

Also, sneaking up on people having a conversation they wish to keep private can be a lot easier than you would think. Personally, I’ve found the harder skill is to sneak away after I’ve realized I’ve accomplished this, so that I don’t piss them off for having eavesdropped on their private conversation they were having in a public space, when I was just intending on traveling to a point beyond where they were gathered.

Teleportation up in this bitch. Or stealth’s really popular these days