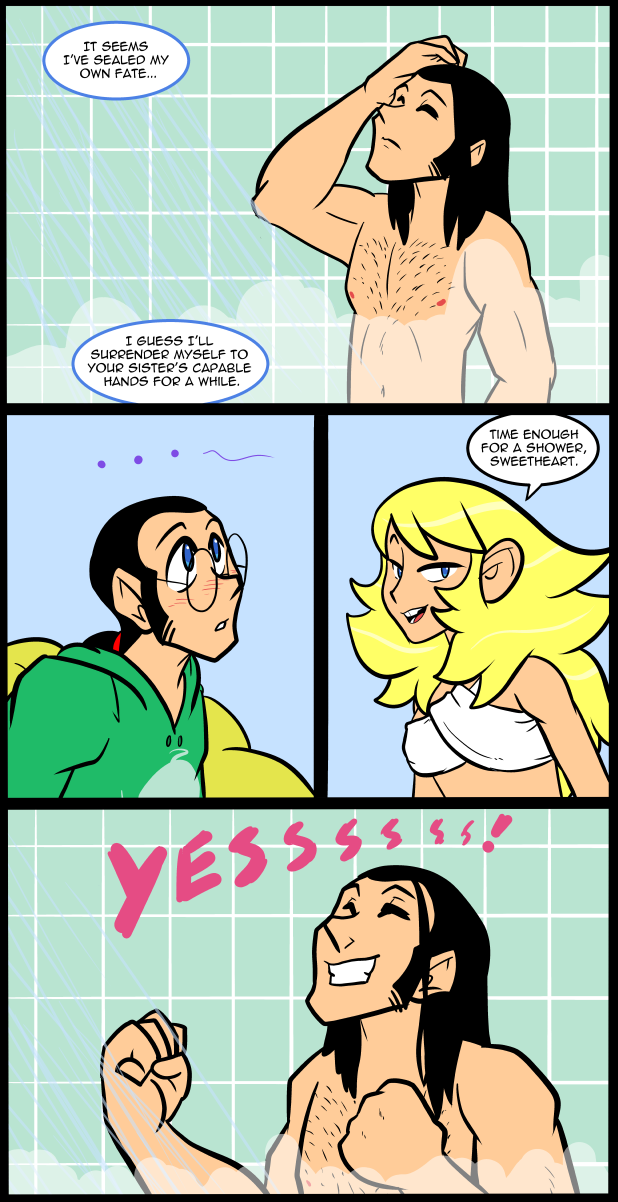 Oh, Patreon supporters, I’m just about to upload a picture of Nina in a bikini, so look forward to that in a few minutes. It’s an old drawing from when I was drawing the girls as Oni.

As I’m sure you are all aware, I am a big fan of Animal Crossing. I had a whole stack of towns on different memory cards for the gamecube. Played the DS version for who knows how long, then imported my villager to the Wii. I played City folk every day for at least a year. It was a big part of how I battled my depression. After 365 days I put all my rare flowers in storage and moved on. As far as I know the save file is still safe and inside my WiiU. By the time I stopped playing I felt like I would never play Animal Crossing again. I had played enough forever, I thought. When they announced it for the 3DS I was hesitant. I had a feeling that there wouldn’t be enough new there for it to make it worth my time, but as the days grew closer I found that I wanted to step back into that world. I purchased it as a download, because I wanted to have it in the system all the time. It was like coming home. I played my first new village for a long time before the account upgrade disaster that caused my 3DS to no longer recognize my save file. It was one of the few times I actually called Nintendo hoping they could fix it. Unfortunately it was a lost cause. I genuinely grieved over the loss of that data. After seeing the same townsfolk for so long I had grown very fond of them. Eventually I started a new town, armed with all the knowledge I gained from my first. The map was very carefully chosen so I could landscape it exactly how I wanted. By happenstance one of the villagers I lost was in the new town. Of course he had no memories of the old town, so it was kind of like he had a stress disaorder from the trauma. It was Jeremiah the blue frog, he was a good friend of mine. I eventually let him move away, but he comes to visit on main street all the time.
In my new town the mayor’s house sits right next to Town Hall. Next to that is Brewster’s coffee. It sits snuggly between town hall and the recycle shop. Just behind that is the town plaza. The town was founded on December 10th 2013. I’ve played almost every day since the game was released, even when I was in the hospital. The longest continual residents are Ankha, Carmen, and Canberra, if memory serves. I eventually got Beardo, a favorite from my first town. I still desperately want Monique to moved in to town. I’ve been trying to get Agnes or Tangy to move, but I don’t have Tangy’s picture yet, and Agnes always fakes me out when she acts like she wants to move. I’m still earning badges after all this time. I got two of them today in fact. No one can say I haven’t gotten my money’s worth from this game.
I say all of that to justify not buying Mario Maker, and instead buying Happy home designer (With the NFC adapter) It will get here on the day of release and I got the physical game because you don’t get any extras with the downloaded copy. I feel like I’ll actually play HHD whereas with Mario Maker I’ll have big plans but it will never go anyplace. I can wait it out. Everybody else gets bored and moves on so much faster than I do. I feel like I need to stay true to my habits rather than follow the crowd, who will just move on to the next thing long before I do. In addition to the new game the NFC will allow me to use my Ammibo in my 3DS games, which I’ve had to wait way too long to do. I stopped playing Codename Steam because I wanted to have the Fire Emblem Amiibo… I only managed to get Ike, but it looks like that’s as many as I’ll ever get at this point. I’ll finally be able to rain amiibo on my 3ds, so I won’t have to have the tv on making the room hot. I also ordered 3 packs of the Amiibo cards. Amazon’s limit was 4, but I couldn’t swing it. I wanted at least a few before they were $80 on ebay.
In some ways Happy Home is the Mario maker for its series. It addresses a problem that AC fans have long had. The villagers are totally insane and turn into crazy hoarders as time goes by. In HHD you get to fix that noise. I really hope I get Ankha as a client, or as a card. She’s my favorite villager.

I’m picking up HHA tomorrow too, but not with the adapter, as I managed to snag a new 3ds at launch. I’m a little too excited for the K.K. amiibo…

If I manage to snag an Ankha card, though, and you don’t, I’ll send it to you.

I actually feel bad a lot since I can’t support you through Patreon. I mainly just try and spread your wondrous works whenever someone brings up webcomics in a conversation. It’d be nice to be able to give back, and you would probably appreciate her more than I would.

With a sultry glance like that and the very act of calling him “sweetheart”…all I’m saying is that I’ve never heard someone speak the latter in a flirtatious or sarcastic manner.

So.. actually romantic dating entanglement going on then?

since she was pretty flirty before too

Oh dude, this is just perfect!
Could not help but imagine him doing that dance from 500 Days of Summer in the shower

Congrats Ed! I know things have been moving kinda fast, but it feels like it’s been years in the making! *coff* *coff*

Thanks Jackie! Can’t wait to see where they go next!

…wait, I’m confused. So, in the first panel he’s in the shower, but the word balloons are Nina’s. Then are the next two panels flashbacks before he got in the shower?

He’s remembering what she said before flashing back.

It’s a voice over basically, then he remembers the moment so you can see it.

Im sorry, but this has to be here…
https://www.youtube.com/watch?v=vFUJrg5GAvs

Don’t get too excited

Ah, that. Happened to I see woman looks, you know. I’m not talking
about comic, I’m talking about woman from other country.