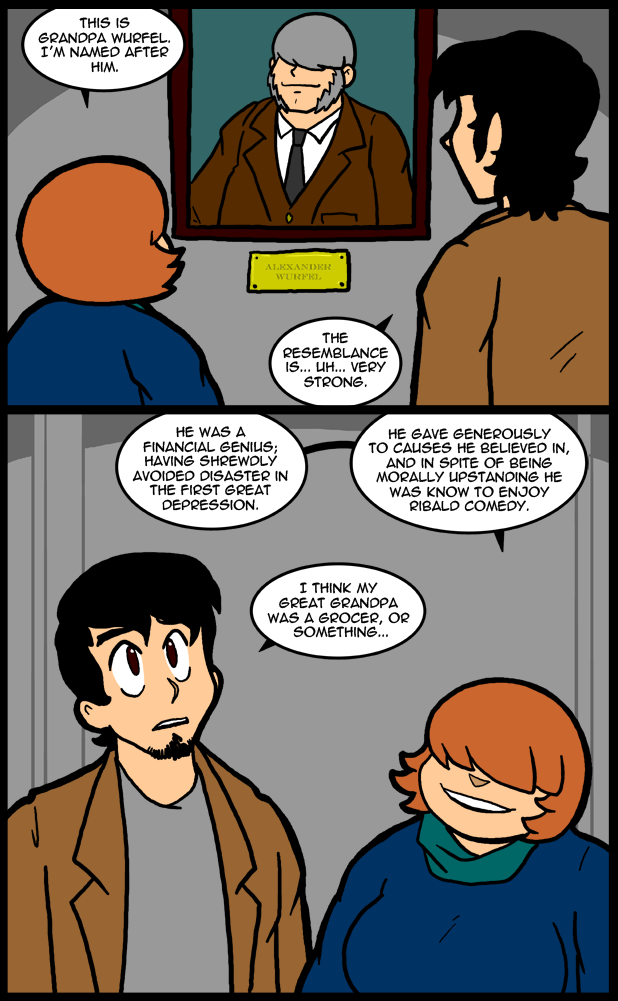 I couldn’t resist making Alex’s grandpa have a similar hairstyle. Originally he was going to look a bit more like William Howard Taft. I just love that kind of nonsense.

The depression Alex references is not the “Great Depression”. I’ve heard a few people call the economic downturn the new great depression, but I don’t think that’s correct. It could have been much worse, but I won’t get in to that… No, the depression she’s talking about WAS originally called the great depression, but it was overtaken by the one we call the great depression, and is now known as the Panic Of 1873. It took place after the American Civil War. Just so you get an idea of when Alex’s ancestor founded the library.
Alex likely didn’t call it the Panic Of 1873 because she realizes that John is not very savvy, from a historical perspective, so calling it the First Great Depression would have greater impact. It’s pretty clear that she idolizes her grandfather and wants him to sound appropriately impressive.

If my memory serves me correctly, this is the second big ginger gal you’ve created.

I wouldn’t call her ginger… Regardless, my stance on fatties is well documented.

that makes it sound kinda creepy, like you’re taking pictures and writing notes about them in a secret ledger.

Who told you about my ledger!?

That would sadly be me my friend, I so just happened to spot you in it and kinda accidentally let it slip in a conversation, I do indeed highly apologize for any problems which have arrised out of it and will try my best to avoid further incident like these to happens*bows*……

And now to something completely different, how’s it going with you pc, still having the same problems?

None of us has had time to mess with it. It’s been sitting right where I left it last time. Although I did copypaste the comments for later use.

sorry for the delay on getting back to you regarding this matter as it did escape me for a moment, but if you feel like figuring out the problem i offer my assistance to help fix it, i can however not come there in person due to our distances, but i will like to suggest a couple of ways to figure out the cause and eventually get it fixed….

many problems are because of hardware or software so by booting up in safe mode you will limit programs that will be running to the ones windows need to run the system, am are aware that the problems does usually happen before you logon screen but nonetheless, if nothing else we will aleast figuring out if it’s a hardware problem or not…..

to start in “safe mode” it will be easier and less work for me to follow HP’s own guidelines to safe mode booting on XP by clicking this link http://is.gd/I51cma

when(and if) you got to the logon screen then input you password and let it run for a least a couple of hours, if no problems do appear after a couple of hours then it’s most likely not a hardware problem or problem with the windows system itself, hardware or windows problem may be the case if it does reboot even in “safe mode”

also, you mention you have not touched it since last time which mean is “cold” at the moment, so to figuring out if the problem may lie in the cooling system i want you to check how long after after you boot it before it reboots if it does that, then i want you to reboot it again a couple of times, if the time before it reboots again is short then it’s most likely a cooling problem that may indicate the thermal paste need replacing or something else responsible for the cooling is wrong….

also, to help you as best as i can i would like to know if it’s a laptop or not, for these advice i have assumed it was a laptop but if not then please tell me so…..

What would you call her hair color?

This most recent downturn has been dubbed The Great Recession.

I would tend to agree with that.

Back in the 1920s, “recession” was considered a stronger term for an economic downturn than “depression” was, so after the crash of ’29 the government referred to that downturn as a depression so as not to scare people by using the “R” word. Then it went and lasted all through the ’30s and became the Great Depression, so ever since then “depression” is considered the stronger, scarier term.

She’s got a lot of pride.

Does this make this economic downturn the Third Depression?

Actually there have been several major economic depressions and the title keeps being moved down the line as each one gets worse. Historically this recession should have caused a massive depression, but the administration pushed it down the line. If they don’t actually fix the problems that caused the collapse a real depression will happen in 3 to 5 years.

Most people around today are either too young or short of memory to recall the Recession of the 1970s. I actually bought a house on minimum wage ($2.30 an hour) because the market was so depressed.

There was a bad depression in the 1870s and another one in the late 1890s. The first was partially caused by aftereffects of the Civil War and the second was caused by Wall Street and the fat cats (apologies Alex — nothing personal) running/ruining the National Economy.

The thing about about Australia is you earn twice the money but a lot of stuff costs twice as much so it all balances out.

The resemblance is strong with this one

Yeah, but still cute and points of interest.

Cute is cute, but smart is always sexy.

ok if this guy was her grandfather and he was an adult in 1873, then either your characters should all be in their fifties, or this story takes place in like the 1980s. you might be better off somehow retconning it to great grandpa, but, hey, up to you.

Actually if you go back a few comics you will see that she IS talking about her GREAT grandfather,

Two of my great-grandfathers were huge men for their times. My father’s paternal grandfather, whose name I inherited (no, his name wasn’t ‘Perfesser’), was a over six feet and a conductor on the B&O Railroad. He passed away in the 1930s. My mother’s maternal grandfather was about 6’7″, a giant of a man for his day, and quit mining coal to run a farm. It must have affected his health well, because he lived into the late 1950s, after I was born. We never met him; after Mom’s mother died, she lost contact with that side of the family.

Oddly enough, all of my grandparents and both of my parents were on the small side. I only met Dad’s Dad, and he was about 5’5″. Grandpa’s second wife was a bit over 6’0″, even taller than I am. I was kind of weird meeting again about 15 years ago.

*was known to enjoy

His great grandpa worked as a grocer, he works in retail. Way to carry on the family tradition.

I want that gentleman’s facial hair. Those chops are grade: a classy.

That smug smile, the strong chin, and the roundish ears…
I can’t help but be reminded of a certain Lupin the Third.

I wonder if he sounds anything like Cave Johnson. The portrait reminds me of the one you find in Portal 2.

Hahah. I died at his hairstyle. xD Family resemblance FTW.

Or FTL, if you’re one who wants to see her eyes…like ME!

I really love how briskly this updates. Its so nice to see somebody who actually keeps a tight time schedule whilst still tweaking and finalizing things in a production that is Free to the audience. This is something I would aspire to if I ever could get over my OCD to make things perfect.

Anywho. Thank you for all your talent.

She reminds me of Urabe from Mysterious Girlfriend X

Alex, a much bigger “Urabe” but the hair-in-eyes thing is true. On a side note I hope we see more Alex I like her and think she adorkable! :-)