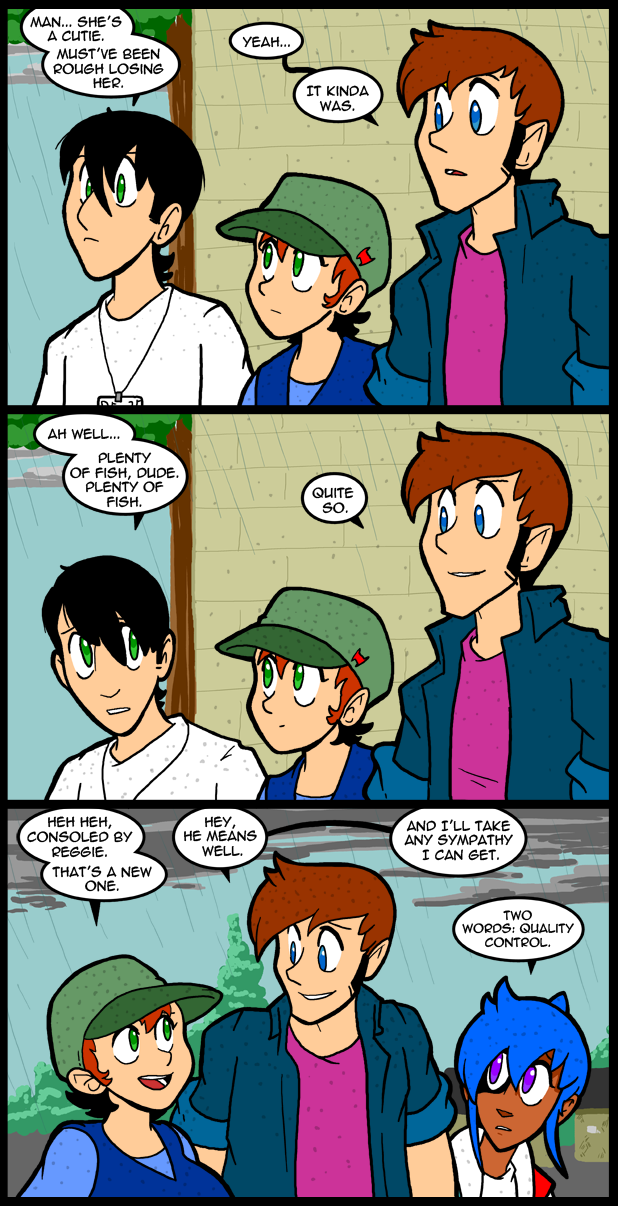 XD I forgot what time it was.

Here we see a little more of the human side of Reggie, which is nice.

I’ll write a little post in a bit. I’m right in the middle of making another page right now.

Christmas was good. It was strange without Uncle Jon, but he would have been disappointed in us all if we didn’t enjoy spending time with each other. It was nice seeing everyone again.

I got some very nice presents, including the WiiU bundle with the two Mario games, so that’s fun. As you will already know I like the pastoral gaming included in all Mario games standard. XD

Also, I liked Dredd. I forgot to say so before. It was very much like the comic as I remember it. it’s not the greatest movie ever or anything but I feel like it was truer to the source.

Yes reggie still a cool dude even if he’s a bit of a dick, but who isn’t?

Maybe Reggie is growing up. It happens to most of us.

Reggie’s a dick, but at least he cares.

JT, do you want any miiverse buddies?

As soon as I figure out how that works. Is it codes? I didn’t read the instructions yet.

This guide has pictures, so here. I’m horrible at explaining things. I’d leave my name here now for you to add whenever but I’ve kind of forgotten it at the moment and I’ll have to check to be sure, lol.

Mine is CheshirexKitten, or you can leave your name and let all us nintendo ID folks send invites to you.

I love Jo’s zinger at the end.

It’ll be a while before Reggie and Jo have any heart to heart chats. She’s pretty opposed to him because he’s misdirected his anger at her for so long.

Yeah, okay, I don’t comment here often, but I really want to say that, to me, Reggie’s been the best-defined character of the cast. You’ve shown him be a dick, you’ve shown him be a decent guy, he comes off as a guy with human faults. I mean, I’m not saying you haven’t done that for the other characters, but with Reggie it’s been most obvious, to me.

So here’s to his continued character depth.

For a while I wondered if he was going to be the *only* defined character by virtue of being the store’s Token Evil Teammate and thus the only consistent source of conflict.

excuse me if I this is taken out of line, but I felt that I must compliment the progress your art style has made since the 1st page of this comic, at least. I am only really going to use a single character for my reference, but if you are willing to check for yourself, you might be able to tell what I am meaning when I say this:

Your art style has come a long way since page 1, or rather. the Title page, if I may push that far back. I mean, intrinsically I do know that it’s a fact that it WOULD change, but yours has taken on a course I don’t see very often. I’m gonna just use Thomas as my example because, honestly? He’s the easiest to use for this compliment.

Go back to the title page and look at Thomas, He looks really good, a helluva lot better than most people can actually draw, but he does look a tad bit like he’d be a good conversion to a Monkey, the big ears that extend outwards, the jaw being angled just so, and the mischievous glint in his eye, but if you look at him here? He looks similar, but it’s harder to say that he’d convert to a monkey as well, and the thing I want to compliment most?

It’s how you did it. It is so subtle, actually hidden from the viewer who is reading it unless you ACTUALLY look for it. Every step of Thomas’ character growth was a softening of the features, a slight change, his chin became less..angular, more curved, his ears don’t jut out quite as much, it makes him seem like he’s grown not only as a person, but bodily as well. And if you’re not looking for it? you’ll NEVER NOTICE IT. It’s a simple thing, but as someone who appreciates a good story, I’d say you’ve nailed character development down to not only a science, but an art. You’re showing each gradual change not only in their behavior, but their appearance as well, and honestly? That’s pretty freaking awesome of you, and it is something that artists CAN do, unlike authors such as myself.

In any case, I apologize for the massive comment, just figured I’d leave my thoughts here since it struck me when I was going to go back and read through the archives, heh.

A lot of that original style was caused by not being able to draw on the computer. The disconnect between hand and eye with a tablet is really hard to get used to, especially when you’re not that good at drawing to start with. If I got a drawing “right” I used it over and over, so the real change didn’t get going until I upgraded my hardware. Then it was a matter of learning to draw in an almost traditional way. I got better at representing the cast the way I wanted to slowly, and I’m still changing it all the time.

that may very well be, but I still offer kudos to you for how well it turned out, I can honestly state that it’s a very subtle set of changes, and while most either don’t notice or don’t care, I still feel that it is worth pointing out, even if just by the virtue of it being present alongside character development. Thomas isn’t so…monkey-like anymore, and it’s been a while since I’ve looked at his usual in-transit attire and thought, “Huh…looks like a skinny Silent Bob.” and honestly? While that was actually a kind of awesome look for him, it also can be led to the thought line of, “Maybe because he’s decided to not cause so many issues anymore..he’s moved on from that appearance of Silent Bob, the troublemaker.” but it’s still at least slightly noteworthy in my eyes.

Either way, This is a webcomic I’ve been following for a while, at least the better part of a year, and I look forward reading it well into next year, and hopefully even the year after that

Quality Control: the action of checking goods, as they’re manufactured, to ensure that the final product is good.

I noticed that Carol and Thomas were looking at him, so I’m not sure if that remark came from the bottom of his heart, or if they were going to beat him if he made a mean remark. It’s most likely the former, but Reggie is a bit like me, at least when it came to making enemies in large social groups. Also, time will tell how much of a cunt Carol could still manage to be, and if it shall prove to be her downfall.

P.S. I do hope Carol has changed much since getting her ass waxed by Tom, but being a domineering woman is her current character type since being employed at Megatainment. Who knows what other sides could be revealed when her family is introduced, or worse, Reggie’s aunt?

I think maybe Tropical Storm Reggie is my spirit animal.

He’s clumsy, self-centered, accident prone, pisses people off a lot, a constant fire hazard, and generally kind of a jerk… but his heart is in the right place.

In the general vicinity.

Within a couple of miles, at least.

An adolescent man can only wish so much for a (formerly) emotionally immature man, and especially when the former has goals, it’s difficult to not insult the latter. So is the case with Reggie and Thomas; however, it appears they’ve settled upon a good note. I pray he redeems himself by saving the store from his family’s corporate bullshit.

@Crave, you magnificent bastard. You’re actually going to make us like that little twerp, Reggie. You know, like Clyde Tiltz used to make the smaller kids eat bugs in Elementary School. We may not appreciate it at the time, but it certainly broadens our horizons.

I love Brooksie’s cautionary message in the last panel — and her expression that goes with it.

In the first two panels I thought dust was exploding from Carol’s hat. Then in the third panel I think to my self “*facepalm* Jim you idiot, that’s rain!”

Wow, let me just say that I found your webcomic by accident but I couldn’t help myself and read through the whole thing in one sitting. Needless to say, I totally love it and I’m looking forward to check in again to see how the story progresses.

Gah! I’ve liked Reggie for quite awhile, actually. Not his dick qualities, but the butt load of potential you could see in him. And now, we’re (hopefully) seeing the beginning of his potential start bubbling forth with one little comment, one little moment.

Ooh, be my Wii U friend too! My NNID is Datablue. :) I hope you got Super Mario 3D World, that game is amazing. I think the teen will enjoy playing it too. Kitty Mario ftw!

Reggie’s got a point.